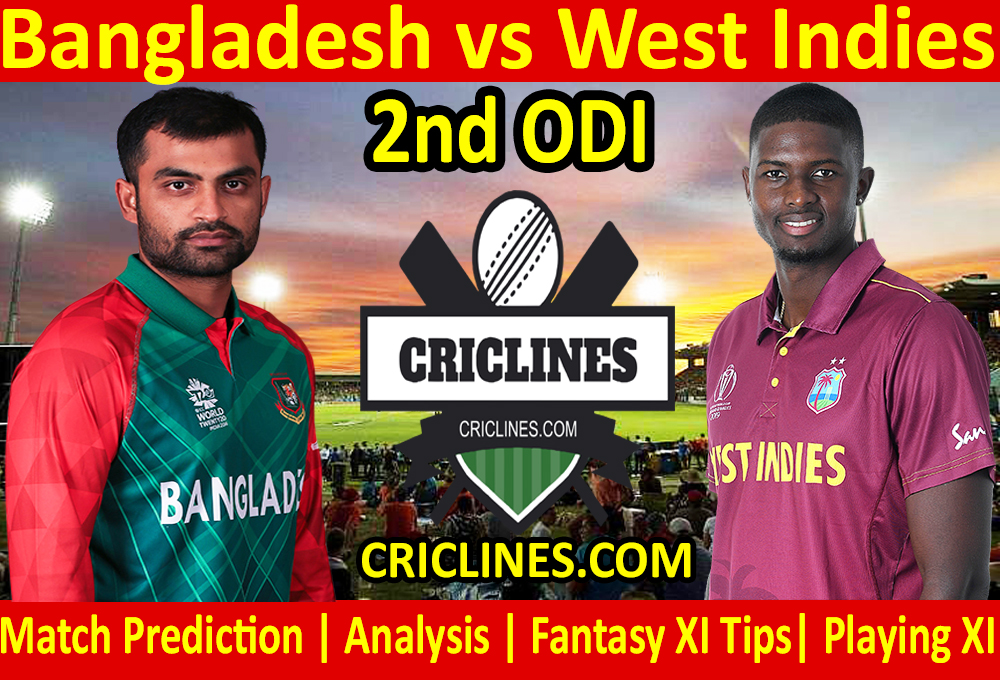 The world is ready to witness yet another big battle of ODI cricket. The 2nd ODI match of the West Indies tour of Bangladesh, 2021 is scheduled to be held on Friday, 22nd January 2021 at Shere Bangla National Stadium, Dhaka. We are providing 100 safe, perfect, and accurate today match prediction for all matches of Bangladesh and the West Indies.

Bangladesh had a good start to this ODI series against West Indies and had won the opening match of this series by the margin of six wickets. They won the toss and decided to field first. The way how their bowling unit performed in that match was just outstanding. They send the all team of West Indies back to the pavilion on a total of 122 runs in 32.2 overs. Shakib ul Hasan was the most successful bowler from their side who picked four wickets in his 7.2 overs bowled out just eight runs.

Hasan Mahmud also performed well with the ball in the previous match. He picked three wickets in his three overs bowled out while he was charged for 28 runs. Mustafizur Rahman picked two wickets while Mehidy Hasan could manage to pick one wicket. Like the bowling, the batting order of Bangladesh also performed well in the previous match. They chased the target of 123 runs in 33.5 overs. The skipper, Tamim Iqbal was the most successful and highest run-scorer from their side who scored 44 runs. He faced 69 deliveries and smashed seven boundaries during his inning. Shakib Al Hasan and Mushfiqur Rahim scored 19 runs each.

West Indies failed to have a kick start to this series against Bangladesh. They lost the opening match of this series against Bangladesh by the margin of six wickets. They lost the toss and were asked to bat first. The batting order of the West Indies almost collapsed in that match. They could manage to score 122 runs and were all-out in 32.2 overs. Kyle Mayers was the most successful and highest run-scorer from their side who scored 40 runs. He faced 56 deliveries and smashed four boundaries and one six.

Rovman Powell scored 28 runs in the previous match while the skipper, Jason Mohammed had 17 runs to his name. The bowling unit of the West Indies also failed to give their best performance in the first match of this series. They failed to defend the target of 123 runs and leaked this target in 33.5 overs. Akeal Hosein was the most successful and highest wicket-taker from their side who picked three wickets in his 10 overs bowled out against 26 runs. The skipper, Jason Mohammed picked one wicket while Alzarri Joseph, Chemar Holder, Andre McCarthy, and Nkrumah Bonner were the bowlers who failed to pick any wicket.

Bangladesh had played a total of 377 ODI matches so far. They won 129 matches while other teams won 241 matches while their 7 matches were ended with no result.

West Indies had played 824 ODI International matches right now with 401 wins to their name. They had lost 383 matches while 30 matches were ended with no result and 10 matches were tied.

Bangladesh had played 39 ODI matches against West Indies where they won 16 while West Indies had won 21 matches and two matches between these two teams were ended with no result.

The 2nd ODI match between Bangladesh and West Indies is going to be played at Shere Bangla National Stadium, Dhaka. The pitch at this stadium is excellent for batting. The boundaries at this venue are short and will bring the spinners into play. The pitch will continue to be good for batting throughout the match. As per the live cricket score, a total of

Who Will Win Bangladesh vs West Indies 2nd ODI

Who Will Win Bangladesh vs West Indies 2nd ODI Toss-WI

Who Will Win Bangladesh vs West Indies 2nd ODI Match-BAN