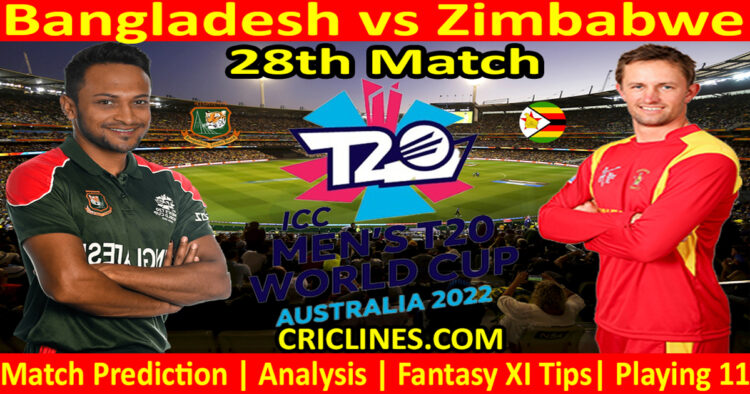 Cricket fans are ready to witness yet another big battle of the World Cup T20. The 28th match of World Cup T20 2022 is scheduled to play between Bangladesh and Zimbabwe on Sunday, 30th October 2022 at The Gabba, Brisbane. We are posting a safe, accurate, and secure today match prediction of the ICC T20 World Cup 2022.

Two other big matches of the ICC T20 World Cup were washed out by the rain. The matches of Afghanistan vs Ireland and England vs Australia were abandoned without a ball being bowled due to rain (no toss). The points tables of both groups are fluctuating very fast. We also had seen some massive upsets in this tournament. Zimbabwe and Bangladesh are currently in the middle of the table of Group 2.

Zimbabwe had played just one completed match against Pakistan which they won after an interesting competition while their match against South Africa was washed out by the rain. Bangladesh had also played two matches with one win and the other loss. They beat the Netherlands in their first match and were beaten by South Africa in the next match by a huge margin.

Bangladesh totally failed to play good cricket in their previous match against South Africa and lost the match by a margin of 104 runs. This kind of big defeat never comes in T20 cricket. The bowlers and batters of Bangladesh were totally under pressure. They lost the toss and were asked to field first. The performance of their bowling unit was very poor and they leaked 205 runs in 20 overs. No bowler from their side could stop the batters of South Africa from scoring the runs. The skipper, Shakib Al Hasan proved the highest wicket-taker with two wickets to his name in three overs against 33 runs. Taskin Ahmed, Hasan Mahmud, and Afif Hossain picked one wicket each while Mehidy Hasan Miraz, Mustafizur Rehman, and Mosaddek Hossain were the bowlers who failed to pick any wicket.

The batting order of Bangladesh also collapsed in the previous match while chasing a big total on the board. They could manage to score just 101 runs and their full team came back to the pavilion in 16.3 overs while chasing the target of 206 runs. Litton Das was the only batter from their side who put some runs on the board. He scored 34 runs on 31 balls with the help of one boundary and the same huge six. Soumya Sarkar scored 15 runs while Mosaddek Hossain had 12 runs to his name. Taskin Ahmed could manage to score just 10 runs. No other batter from the side of Bangladesh could enter into the double figure. Bangladesh had lost one match and their net run rate is also very poor. They need to win the remaining matches with big margins to remain in the contest.

Zimbabwe had an upset against Pakistan and their important match with a margin of just one run. They won the toss and decided to bat first. The performance of their batting order was not much impressive and they could manage to score just 130 runs in 20 overs. Sean Williams was the highest run-scorer from their side with 31 runs to his name on 28 balls with the help of three boundaries. Brad Evans and the skipper, Craig Ervine scored 19 runs each while Madhevere scored 17 runs. Ryan Burl also performed well and remained not out after scoring 10 runs.

Zimbabwe won the previous match due to outstanding performance by their bowling unit. They were also good at fielding and put the strong batting order of Pakistan right from the start. They defended the target of 131 runs and leaked 129 runs. Remember that they defended eight runs in the 20th over. Sikandar Raza did not perform well with the bat but he was just outstanding with the ball. He was also the most successful and highest wicket-taker with three wickets to his name in four overs against just 25 runs. Brad Evans was the other bowler who destroyed the batting order of Pakistan. He picked up two wickets in four overs while he was charged with 25 runs. Luke Jongwe and Blessing Muzarabani picked one wicket each.

Bangladesh is full of experienced and young players in the t20 format. The batting order of this team is also strong and some well-known hitters of the t20 format are part of the squad of this team, so the winning chances of today’s match for Bangladesh have been increased. The equation of who will win today’s cricket match prediction and who will win the cricket match today is mentioned as under.

The 28th match of World Cup T20 2022 is going to be held at The Gabba, Brisbane. We had observed in the previous matches played here that the pitch here at this venue is good for batting. The pitch is bouncy and fast and run-scoring is not much easy in early and middle overs. We are hoping that the surface is bound to get slower and be a bit more difficult for batting in this match. A score of 170 is going to be tough to chase.

Who Will Win Bangladesh vs Zimbabwe, 28th Match World Cup 2022

Shakib Al Hasan, Sikandar Raza, and Blessing Muzarabani are key players to watch in this match.

We had provided you above-mentioned today match prediction on the basis of our research, understanding, and analysis. You can consider the point we provided you and the final decision will be yours that you have to make at your own risk.