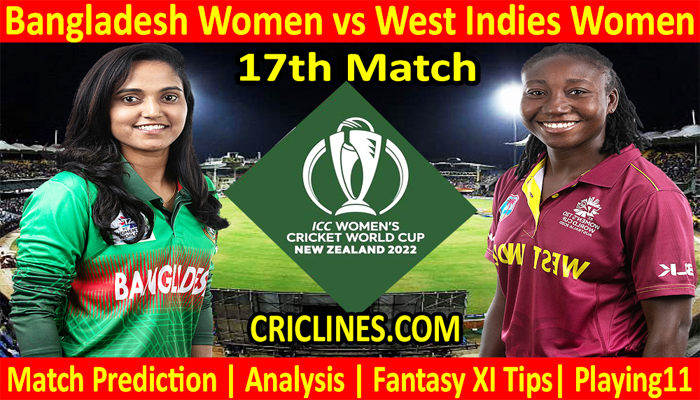 The world is ready to witness yet another big battle of Women’s ODI cricket. The 17th match of Women’s World Cup 2022 is scheduled to play between Bangladesh Women and West Indies Women on Friday, 18th March 2022 at Bay Oval, Mount Maunganui. We are posting safe, accurate, and secure today match prediction of world cup free.

Bangladesh Women are the worst-performing team of this tournament right now. They had played a total of three matches with just one win to their name. They had lost two matches and are laying at the second position from the bottom of the table. On the other side, West Indies had performed average in this tournament. They had won two out of four matches played so far. They had lost two matches and are holding the fifth position on the points table.

Bangladesh Women had beaten Pakistan Women in their previous match with a margin of just nine runs. They lost the toss and were asked to bat first. The performance of their batting order was good. They scored 234 runs in their inning of 50 overs. Fargana Hoque was the highest run-scorer from their side who scored 71 runs on 115 deliveries with the help of five boundaries. The skipper, Nigar Sultana scored 46 runs while Sharmin Akhter could manage to score 44 runs.

Bangladesh won the previous match due to the best performance by their bowling unit. They defended the target of 235 runs and leaked 225 runs in their inning of 50 overs. Fahima Khatun was the most successful and highest wicket-taker from their side who picked three wickets in her eight overs bowled out against 38 runs. Rumana Ahmed also performed well and picked two wickets while Jahanara Alam and Salma Khatun picked one wicket each.

West Indies Women were beaten by Australia Women in their most recent match by the margin of seven wickets where they won the toss and decided to bat first. Their batting order almost collapsed in the previous match. All teams of West Indies came back to the pavilion on a total of just 131 runs in 45.5 overs. The skipper, S Taylor was the highest run-scorer from their side with 50 runs to her name. She faced 91 balls and smashed three boundaries during her inning.

S Campbell scored 50 runs while Hayley Matthews and Kycia Knight failed to open their account on the scoreboard. The bowling unit of West Indies also failed to give the best performance. They leaked the target of 132 runs in just 30.2 overs. Hayley Matthews, Shamilia Connell, and Chinelle Henry picked one wicket each while Karishma Ramharack, Shakera Selman, and Stafanie Taylor were the bowlers who failed to pick any wicket.

The 17th match of Women’s ODI World Cup 2022 will be played at Bay Oval, Mount Maunganui. The pitch here at this stadium has something in it for both batsmen and bowlers. It is typically a little slow and low but very flat. The pace bowlers have very little to work with and it is the slower bowlers that will be the bigger threat.

Check out the Dream11 lineup for the 20th Women’s ODI World Cup match to be played between Bangladesh Women vs West Indies Women.