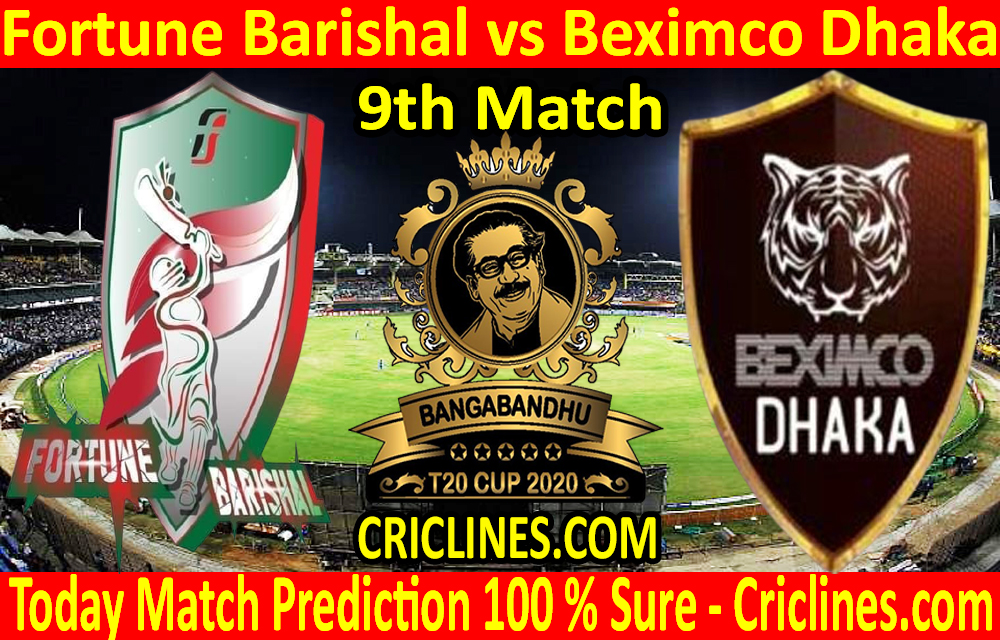 The cricket fans are ready to witness yet another big battle of the B T20 Cup. The 9th Match match of Bangabandhu T20 Cup 2020 is scheduled to play between Beximco Dhaka and Fortune Barishal on Wednesday, 2nd December 2020 at Shere Bangla National Stadium, Dhaka. We are posting safe, accurate, and secure today match prediction for all matches of Bangabandhu T20 Cup 2020 free.

Fortune Barishal had failed to give their best performance in this tournament. They had played a total of three matches with just one win to their name. They had lost two matches and are holding the 4th position on the points table. They had lost their most recent match of this tournament against Gemcon Khulna by the margin of four wickets. They lost the toss and were asked to bat first. The performance of their batting order was average in that match. They could manage to score 152 runs in their inning of 20 overs. Parvez Hossain Emon was the highest run-scorer from their side who scored 51(42) runs and smashed three boundaries and four sixes. Towhid Hridoy could manage to score 27 runs.

Mahidul Islam Ankon scored 21 runs on just 10 deliveries while the skipper, Tamim could manage to score just 15 runs. Mehidy Hasan failed to open the account on the scoreboard and got out on a golden duck. The bowling unit of Barishal failed to give their best performance in the previous match. They failed to defend the target of 156 runs and were charged for the target in 19.5 overs. Sumon Khan and Taskin Ahmed picked two wickets each while Mehidy Hasan and Kamrul Islam picked one wicket each. Aminul Islam and Afif Hossain failed to pick any wicket in the previous match.

Beximco Dhaka is the worst performing team of this season of the Bangabandhu T20 Cup right now. They had lost all three matches played and are laying at the bottom of the points table. They are coming to this match after losing their previous match against Minister Group Rajshahi by a margin of just two runs. They won the toss and decided to bat field first. Their bowling unit almost failed to perform well in that match. They leaked 169 runs in their inning of 20 overs. Muktar Ali was the most successful bowler from their side who picked three wickets in his four overs bowled out against 22 runs. Mehedi Hasan Rana, Nasum Ahmed, and Nayeem picked one wicket each.

The batting order of Beximco Dhaka performed well in the previous match but they failed to chase the target of 170 runs and could manage to score 167 runs. The skipper, Mushfiqur Rahim was the most successful and highest run-scorer from their side who scored 41 runs while he faced 34 deliveries and smashed three boundaries and one six. Akbar Ali also had a good performance with the bat. He scored 34 runs while Mohammad Naim had 26 runs to his name.

The 9th Match of Bangabandhu T20 Cup season 2020 is scheduled to be held at Shere Bangla National Stadium, Dhaka. The pitch here at this venue is good for batting. It also has a lot of help for the spin bowlers. A total of 180 runs should be a par score.