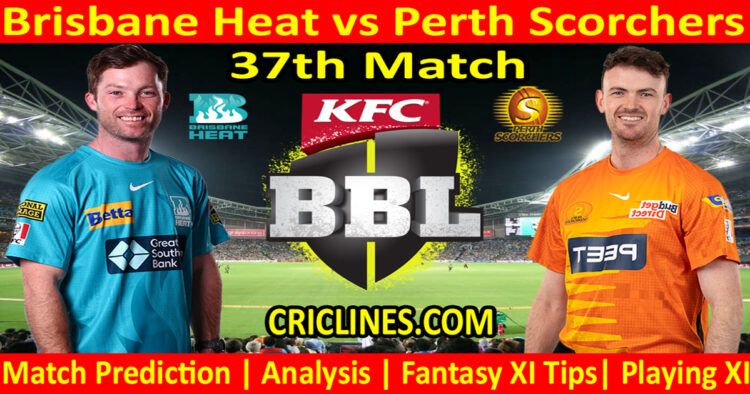 The cricket fans are ready to witness yet another big battle of BBL T20. The 37th match of Big Bash League 2022-23 is scheduled to play between Brisbane Heat and Perth Scorchers on Wednesday, 11th January 2022 at The Gabba, Brisbane. We are posting safe, accurate, and secure today match prediction of BBL T20 free.

The performance of Brisbane Heat had not been very impressive in this tournament. They had played eight matches with just two wins to their name. They had lost five matches while their one match was not decided due to bad weather. They are currently laying at the second position from the bottom of the points table.

Perth Scorchers had just been outstanding in this tournament. They are the defending champions and currently the second best performing team of this season of Big Bash League. They had played a total of eight matches with six wins to their name. They had lost just two matches and are holding the second position on the ladder. They are in good form and we are sure that they will win this match.

Some key players of almost all team of BBL are departing for different league and Brisbane Heat is one of these teams. Colin Munro had been the best batter of the Heat and scored 278 runs and now he is departing to United Arab Emirates for International T20 League. Sam Billings also had been good and he is will also not available. Sam Hain and Ross Whiteley will replace these players. The key players of Brisbane Heat like Usman Khawaja and Marnus Labuschagne had returned from the test series and had joined the Heat. These both players had performed well in the test series and we are sure that they will continue their good form.

Jimmy Peirson had also performed well in this tournament and we are hoping that he will perform well in this match. Mark Steketee and Michael Neser had been the best bowlers for Heat in this tournament. Brisbane Heat was beaten by the same team, Perth Scorchers in their most recent match by a big margin of seven wickets. The batting order of this team performed well and scored 171 runs in 20 overs. Colin Munro was the most successful and highest run-scorer with 45 runs to his name on 26 balls with the help of three boundaries and the same huge sixes. Josh Brown scored 34 runs while Sam Billings scored 27 runs. The bowling unit of Brisbane Heat totally failed to give the best performance and leaked the target of 1712 runs in 16.3 overs. Matthew Kuhnemann and Mark Steketee picked one wicket each.

Faf du Plessis had been the key performer for Perth Scorchers and now he he is available for the selection. Adam Lyth is the other player who had left the side. Cameron Green and Mitch Marsh are two key players of the Scorchers but these both players are facing injuries and will take some time to recover. Stephen Eskinazi had been added to the squad as alternative player. The batting order of the Scorchers is still strong. Ashton Turner had been outstanding in the previous matches and scored 217 runs. Aaron Hardie and Josh Inglis had also performed well in the previous matches. Aaron Hardie had scored 202 runs while Josh Inglis had 246 runs to his name.

Cameron Bancroft also had been good in this tournament till now. He had scored 124 runs in the previous matches. Ashton Agar, David Payne, and Lance Morris had been the best bowlers for Scorchers. Perth Scorchers are coming to his match on the back of a massive win over the same team, Brisbane Heat with a big margin of seven wickets. The performance of their bowling unit was not much impressive as they leaked 171 runs in 20 overs. Andrew Tye was the highest wicket taker with three wickets to his name in four overs against 37 runs while Lance Morris and M Kelly picked two wickets each. The batting order of Perth Scorchers also performed well in the previous match and chased the target of 172 runs in just 16.3 overs. Cameron Bancroft was the highest run-scorer with 76 runs to his account on 48 balls with the help of seven boundaries and two huge sixes. He remained not out till the chase of the target while Aaron Hardie scored 57 runs.

Aaron Hardie, Cameron Bancroft, and Josh Brown Short to watch in this match.

Perth Scorchers is full of experianced and young players of the t20 foramt. The batting order of this team is also strong and some well known hitter of t20 format are the part of the squad of this team, so the winning chances of today match for Perth Scorchers have been increased. The equation of who will win today cricket match prediction and who will win the cricket match today is mentioned as under.

The toss will play an important role in the decision of all matches of Big Bash League. Having a good total on the board is always a big advantage in these kind of big matches. According to toss prediction, the team who will win the toss may choose to bat first.

The 37th match of Big Bash League 2022-23 is going to be held at The Gabba, Brisbane. We had observed in the previous matches played here that the pitch here at this venue is good for batting. The track is slower than the others we have seen and helps the spinners quite a bit. We are hoping that the surface is bound to get slower and be a bit more difficult for batting in this match. A score of 185 is going to be tough to chase.

We had provided you with the above-mentioned BBL T20 Prediction on the basis of our research, understanding, and analysis. These prediction tips have also based on the reports which we have from our different sources. You can consider the point we had provided you and the decision will be yours.