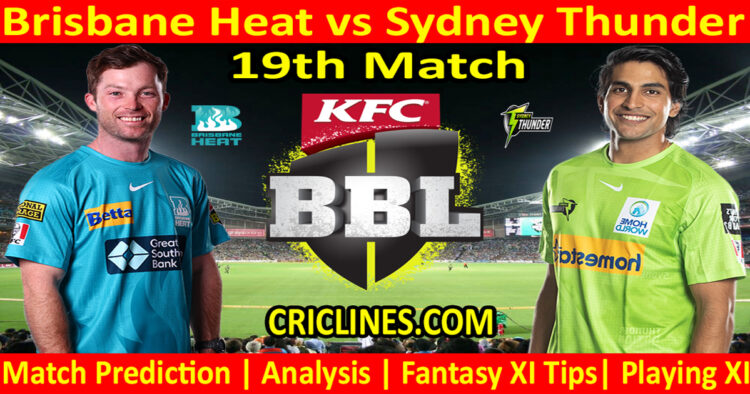 The cricket fans are ready to witness yet another big battle of BBL T20. The 19th match of Big Bash League 2022-23 is scheduled to play between Brisbane Heat and Sydney Thunder on Thursday, 29th December 2022 at Carrara Oval, Queensland. We are posting safe, accurate, and secure today match prediction of BBL T20.

Brisbane Heat and Sydney Thunder faced each other at Sydney Showground Stadium, Sydney, and now are going to play against each other once again at Carrara Oval, Queensland. Sydney Thunder had beaten the Heat with a handsome margin of ten wickets. Brisbane Heat had not been good in this tournament. They had played four matches with just one win to their name. They had lost three matches and are laying at the bottom of the ladder.

The performance of Sydney Thunder had not been much impressive in this edition of Big Bash League. They had played a total of five matches with just two wins to their name. They had lost three matches and are holding the fifth position on the points table. Now they are going to face Brisbane Heat and they already had beaten this team by a big margin.

Brisbane Heat totally collapsed in the previous match against the Thunder. The batting and bowling units of this team looked under pressure. They decided to bat first after winning the toss. The performance of their batting order was very poor and they could manage to score just 121 runs in 20 overs. Just three batsmen from their side could manage to enter into the double figure. Colin Munro was the most successful and highest run-scorer with 43 runs to his name on 47 balls with the help of three boundaries and one huge six. Xavier Bartlett remained not out after scoring 28 runs. He faced 17 balls and smashed four boundaries.

The skipper, Jimmy Peirson scored 27 runs on 24 balls with the help of three boundaries. Max Bryant and Sam Billings are their leading batsmen but they totally failed to put some big runs on the board. Both batsmen scored just one run each. The bowling unit of Brisbane Heat also failed to give the best performance. They leaked the target of 122 runs in just 11.4 overs. No bowler from their side could manage to pick any wicket. They used five bowlers and all bowlers from their side remained wicketless. Michael Neser, Mark Steketee, Xavier Bartlett, Mitchell Swepson, and Matthew Kuhnemann were the bowlers who failed to pick any wicket. Brisbane Heat is not a weak team and they just need to put things in the right way to get the winning momentum.

Sydney Thunder performed well in each and every department of the game in this most recent match against the same team, Brisbane Heat. They lost the toss and were asked to field first. The performance of their bowling unit was just superb. They leaked 121 runs in 20 overs. The skipper, Chris Green was the most successful bowler from their side with two wickets to his name in four overs against just 14 runs. Daniel Sams also performed well and picked two wickets while he was charged for 27 runs in four overs. Usman Qadir was the other bowler who performed well with the ball and picked one wicket in four overs against 19 runs.

Nathan McAndrew was the other bowler with a wicket to his name in three overs while he leaked 28 runs. Gurinder Sandhu and Brendan Doggett were the bowlers who failed to pick any wicket in the previous match. The batting order of Sydney Thunder also had an outstanding performance and chased the target of 122 runs in just 11.4 overs without losing any wickets. The opening batsmen of the Thunder, Matthew Gilkes, and Alex Hales were just superb with the bat. Alex Hales proved the highest run-scorer with 59 runs to his name on 36 balls with the help of ten boundaries. Matthew Gilkes also had an outstanding performance and scored 56 runs. He faced 34 balls and smashed six boundaries and three huge sixes. We are sure that both batsmen will perform well in this match.

Alex Hales, Matthew Gilkes, and Colin Munro are key players to watch in this match.

The 19th match of Big Bash League 2022-23 is going to be held at Carrara Oval, Queensland. We had observed in the previous matches played here that the pitch here at this venue is good for batting. The track is slower than the others we have seen and helps the spinners quite a bit. We are hoping that the surface is bound to get slower and be a bit more difficult for batting in this match. A score of 185 is going to be tough to chase.