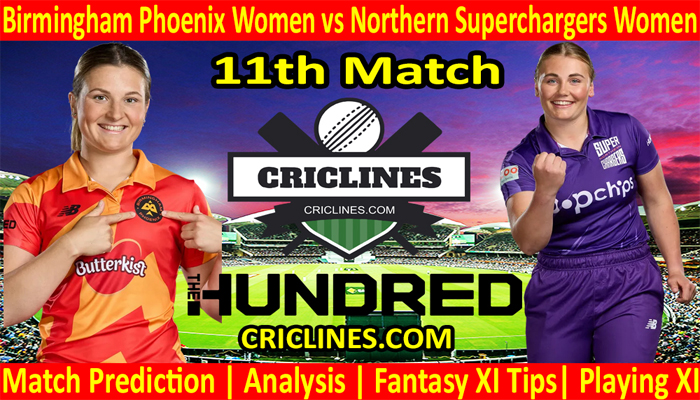 The world is ready to witness yet another big battle of Women’s cricket. The 11th Match of The Hundred Women’s Competition 2022 is scheduled to play between Birmingham Phoenix Women and Northern Superchargers Women on Friday, 19th August 2022 at Edgbaston, Birmingham. We are posting safe, accurate, and 100% secure today match prediction for all matches of The Hundred League 2022 free.

Birmingham Phoenix Women is the best performing team this season of The Hundred Women League 2022. They had played two matches and had won both matches. They are leading the points table. They had beaten Trent Rockets Women in their most recent match by the margin of eight wickets. Earlier, they won their match against Welsh Fire Women by the margin of 19 runs. The performance of their batting order was good. They scored 161 runs in their 100 balls inning. E Perry was the most successful batter from their side who scored 58 runs on 30 balls with the help of 10 boundaries. The skipper, S Devine was the other batter who put some big runs on the board. She scored 48 runs. She faced 25 balls and smashed seven boundaries and two huge sixes during his inning.

Molineux also performed well with the bat and remained not after scoring 29 runs. The performance of the batting order of Birmingham Phoenix Women was also good in the previous match. They defended the target of 162 runs and leaked 145 runs in their inning of 100 balls. Sophie Molineux, Issy Wong, Georgia Elwiss, Kirstie Gordon, Abtaha Maqsood, Emily Arlott, and the skipper, Sophie Devine are the leading bowlers of this team. Georgia Elwiss was the most successful bowler from their side who picked two wickets in her 20 balls against 29 runs. Abtaha Maqsood and Sophie Devine picked one wicket each. Our match prediction of this match is confirming that they will win this match.

Northern Superchargers are the other team that had played two matches with one win and the other lost. They are holding the fifth position on the points table. Their most recent match was very interesting against London Spirit Women where they lost the match by the margin of just five runs. They played their first match against Oval Invincibles Women by a huge margin of nine wickets. The performance of their batting order was not very good in that match where they scored just 143 runs in their 100 balls inning. Rodrigues was the most successful and highest run-scorer from their side who scored 51 runs on 32 balls with the help of eight boundaries. Wolvaardt was the other batter who was just good with the bat.

Wolvaardt scored 49 runs in the first match. She faced 39 balls and smashed five boundaries and one huge six during her inning. The bowling department of Northern Superchargers Women also failed to give the best performance in the previous match. They leaked the target of 144 runs in 84 balls. Lucy Higham, Beth Langston, Linsey Smith, Jenny Gunn, Katie Levick, and Alice Davidson Richards are the leading bowlers of this team but only Jenny Gunn was the bowlers who could manage to pick one wicket while all other bowlers remained wicket-less. The bowling department of this team is very strong and they will give a tough time to the batters of Birmingham Phoenix Women.

Birmingham Phoenix Women is full of experienced and young players of the t20 format. The batting order of this team is also strong and some well-known hitters of the t20 format are part of the squad of this team, so the winning chances of today match for Birmingham Phoenix Women have been increased. The equation of who will win today’s cricket match prediction and who will win the cricket match today is mentioned as under.

The 11th Match of The Hundred Women’s Competition 2022 is going to be held at Edgbaston, Birmingham. We had observed in the previous matches played here that the pitch here at this venue is good for batting. The track is slower than the others we have seen and helps the spinners quite a bit. We are hoping that the surface is bound to get slower and be a bit more difficult for batting in this match. A score of 180 is going to be tough to chase.

The weather forecast for Birmingham is good for this cricket match. There are almost no chances of rain in the region and we are hopeful that we will have a full match to enjoy.

Dream11 fantasy team lineup prediction for Birmingham Phoenix Women vs Northern Superchargers Women 11th Match The Hundred Women’s Competition 2022. After checking the latest player’s availability, which players will be part of both teams, the possible tactics that the two teams might use as we had learned from previous seasons of The Hundred Women’s Competition 2022 to make the best possible Dream11 team.