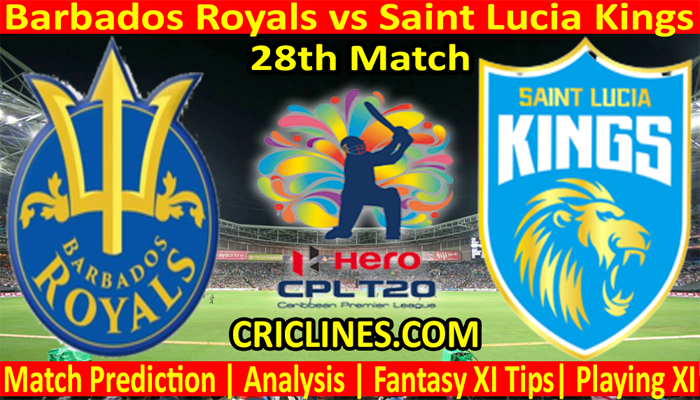 The world is ready to witness yet another big battle of the Caribbean Premier League T20. The 28th Match of CPL T20 2021 is scheduled to play between Barbados Royals and Saint Lucia Kings on Sunday, 12th September 2021 at Warner Park, Basseterre, St Kitts. We are posting safe, accurate, and secure today match prediction of matches of CPL free.

Today is the last day of league stage matches of the Caribbean Premier League T20, 2021. Barbados Royals is out from the race to the semi-finals as they had won just two out of nine matches played so far. They had lost seven matches and are laying at the bottom of the points table. Saint Lucia Kings have a chance to qualify for the next level of this tournament but this match is a must-win for this team. They had played nine matches with five wins to their name. They had lost four matches and are holding the 4th spot on the points table.

Barbados Royals were beaten by Saint Lucia Kings in their most recent match by the margin of 14 runs. That was a rain-affected match and was decided to through the DLS method. They won the toss and decided to field first. The performance of their bowling unit was not impressive. They leaked 175 runs in their inning of 20 overs. Mohammad Amir was the most successful and highest wicket-taker from their side who picked two wickets in his four overs bowled out against 31 runs. Joshua Bishop, Hayden Walsh, Nyeem Young, and the skipper, Jason Holder picked one wicket each while J Lintott was the only bowler who failed to pick any wicket.

The performance of the batting order of Barbados Royals was average. They were given the target of 170 runs to chase in 19 overs but they could manage to score 155 runs in their inning of 19 overs. The skipper, Jason Holder was the highest run-scorer from their side who scored 34 runs on 24 deliveries with the help of one boundary and three huge sixes. Shai Hope scored 31 runs while Johnson Charles and Hayden Walsh scored 30 runs each. No other batsmen from their side could even enter into a double-figure.

Saint Lucia Kings had beaten the same team, Barbados Royals in their most recent match with the margin of 14 runs in a rain-affected match. They lost the toss and were asked to bat first. The way how the batting order of Saint Lucia Kings performed in the previous match was just outstanding. They scored a total of 175 runs in their inning of 20 overs. The skipper, FAF du Plessis was the highest run-scorer from their side who scored 84 runs on 54 deliveries with the help of five boundaries and four huge sixes. Tim David had 34 runs to his name in the previous match.

Like the batting, the bowling unit of Saint Lucia Kings also performed well in the previous match. They were given the target of 170 runs to defend in 19 overs. They leaked 155 runs in their inning of 19 overs. David Wiese was the most successful and highest wicket-taker from their side who picked five wickets in his four overs bowled out against 25 runs. Javor Royal, Wahab Riaz, and Alzarri Joseph picked one wicket each.

Barbados Royals had faced Saint Lucia Kings in 16 matches where they had won 10 while SLK had won 6 matches.

The 28th Match of the Caribbean Premier League is going to be played at Warner Park, Basseterre, St Kitts. We had observed in the previous matches played here that the pitch here at this venue is good for batting. The track is slower than the others we have seen and helps the spinners quite a bit. We are hoping that the surface is bound to get slower and be a bit more difficult for batting in this match. A score of 185 is going to be tough to chase.

Dream11 fantasy team lineup prediction for Barbados Royals vs Saint Lucia Kings 28th Match match CPL 2021. After checking the latest player’s availability, which players will be part of both teams, he possible tactics that the two teams might use as we had learned from previous seasons of Caribbean Premier League to make the best possible Dream11 team.