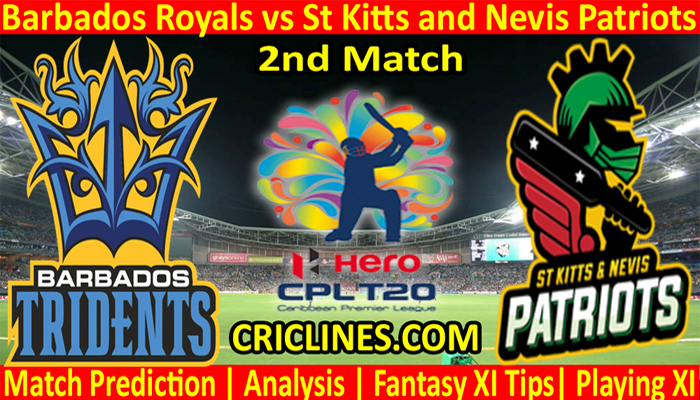 The cricket fans are ready to witness yet another big battle of the Caribbean Premier League T20. The 2nd Match match of CPL T20 2021 is scheduled to play between Barbados Royals and St Kitts and Nevis Patriots on Thursday, 26th August 2021 at Warner Park, Basseterre, St Kitts. We are posting safe, accurate, and secure today match predictions for all matches of CPL free.

Barbados Royals failed to perform well in the previous edition of the CPL T20. They could manage to win just three out of 10 matches played at the league stage. They lost seven matches and were laying at the 5th position on the points table. The management of Barbados Royals had made some key changes in their squad for this season. They had added some extra power in the batting and bowling department. Jason Holder is going to lead this team in CPL T20, 2021.

The batting order of Barbados Royals is strong when we compare it with the previous editions. Johnson Charles, Thisara Perera, and Kyle Mayers are the leading batsmen of this team. Shai Hope, Azam Khan, Samit Patel, and Glenn Philips are wicket-keeper batsmen who are part of the squad of BTS. The bowling department of this team is also strong at least on papers. Mohammad Amir, Oshane Thomas, Hayden Walsh, Ashley Nurse, and Nyeem Young will the taking care of the bowling department.

St Kitts and Nevis Patriots were the worst-performing teams of the most recent season of the CPL. They could manage to win just one out of 10 matches played at the league stage. They lost eight matches while their one match was ended with no result. They were situated at the bottom of the points table after the end of the league stage matches. The squad of this team had been upgraded for this tournament. This team has some big names of the shorter format of cricket in their squad.

Chris Gayle, Evin Lewis, and Asif Ali are the key batters of this team. Chris Gayle had been outstanding in the recent matches he had played and we are sure that he will be proved a game-changer for SNP. Evin Lewis is the other batsman who had played some good innings recently for West Indies. Asif Ali had performed well in the recent season of PSL T20. Dwayne Bravo, Fabian Allen, Ravi Bopara, and Sherfane Rutherford are the extra strength in batting. The bowling department of St Kitts and Nevis Patriots is not much stronger than the batting. Sheldon Cottrell and Fawad Ahmed are the leading bowlers for this team.

St Kitts and Nevis Patriots are full of experienced and young players of the t20 format and have the players like Chris Gayle. The batting order of this team is also strong and some well-known hitter of t20 format is the part of the squad of this team, so the winning chances of today match for St Kitts and Nevis Patriots have been increased. The equation of who will win today’s cricket match prediction and who will win the cricket match today is mentioned as under.

The toss will play a key role in the result of each and every match of the Caribbean Premier T20 League as we had observed in the previous seasons. According to our toss prediction, the team who will win the toss will elect to field first as there is some rain expected and can make the batting a bit difficult.

The 2nd Match match of the Caribbean Premier League is going to be played at Warner Park, Basseterre, St Kitts. We had observed in the previous matches played here that the pitch here at this venue is good for batting. The track is slower than the others we have seen and helps the spinners quite a bit. We are hoping that the surface is bound to get slower and be a bit more difficult for batting in this match. A score of 185 is going to be tough to chase.

Dream11 fantasy team lineup prediction for Barbados Royals vs St Kitts and Nevis Patriots 2nd Match match CPL 2021. After checking the latest players’ availability, which players will be part of both teams, he possible tactics that the two teams might use as we had leaned from previous seasons of Caribbean Premier League to make the best possible Dream11 team.