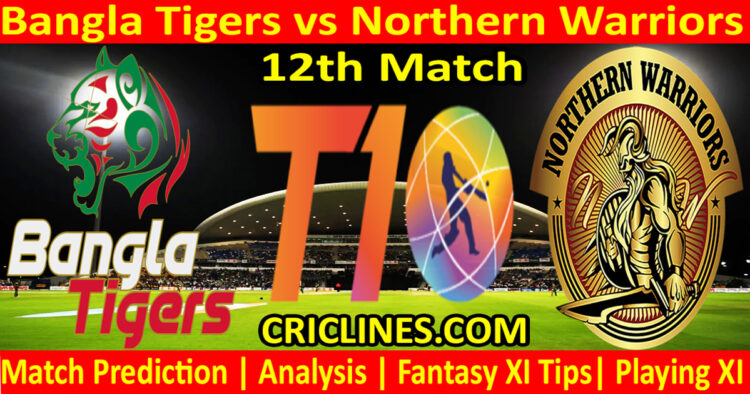 The performance of the Bangla Tigers had not been much impressive in this tournament so far. They had played a total of three matches with just one win to their name. They had lost two matches and are holding the sixth position on the points table right now. They should improve their batting and bowling units to give the best performance in the next matches.

Northern Warriors are the worst performers this season of the Abu Dhabi T10 League. They had played two matches and are still searching for a win as they had lost their both played matches and are laying at the bottom of the ladder. They also have to make some changes in the final playing eleven for this match.

Bangla Tigers had lost their most recent match against The Chennai Braves by a big margin of 33 runs. They lost the toss and were asked to field first. The performance of their bowling unit was not much impressive and they leaked 126 runs in 10 overs. Matheesha Pathirana was the only successful bowler from their side who had one wicket to his name in one over against just six runs. Rohan Mustafa also performed well and picked one wicket in two overs while he was charged with 21 runs. Benny Howell and the skipper, Shakib Al Hasan also picked one wicket each while Mrittunjoy Chowdhury and Ben Cutting were the bowlers who failed to pick any wicket.

The batting order of the Bangla Tigers also failed to give the best performance in the previous match. They could manage to score 93 runs and their full team came back to the pavilion in 9.5 overs while chasing the target of 127 runs. Just three batters of the Bangla Tigers could manage to enter into the double figure. Iftikhar Ahmed was the most successful and highest run-scorer from their side with 49 runs to his name on just 20 balls with the help of two boundaries and five huge sixes. Colin Munro also performed well and scored 15 runs on nine balls. He smashed one boundary and the same huge six. The skipper, Shakib Al Hasan also scored 15 runs but he destroyed 14 balls with the help of one boundary and one huge six. Hazratullah Zazai failed to open the account on the scoreboard and Evin Lewis scored just four runs.

Northern Warriors lost their most recent match against Deccan Gladiators by a margin of 24 runs. They lost the toss and were asked to field first. The performance of their bowling unit was very poor. They leaked 138 runs in 10 overs. R Emrit was the only successful bowler from their side who had one wicket to his name in two overs against 24 runs. Junaid Siddique was the other bowler who had a wicket to his name but he leaked a lot of runs. He picked one wicket while he was charged with 32 runs. No other bowler from their side could manage to pick any wicket. Gus Atkinson, Liam Dawson, Mark Deyal, and Wayne Parnell were the bowlers who failed to pick any wicket in the previous match.

The batting order of Northern Warriors is strong and experienced but they totally failed to give the best performance in the most recent match. They failed to chase the target of 139 runs and scored 114 runs in 10 overs. Adam Lyth was the most successful and highest run-scorer from their side who scoring 51 runs on 22 balls with the help of five boundaries and four huge sixes. Kennar Lewis scored 19 runs while Usman Khan remained not out after scoring 17 runs. The skipper, Rovman Powell could manage to score just 10 runs. Wayne Parnell failed to open the account on the scoreboard and he came back to the pavilion on a golden duck. Sherfane Rutherford scored six runs while Liam Dawson remained not out after scoring seven runs. The batting order of Northern Warriors is performing well and they should change their bowling unit to win the remaining matches.

The 12th Match of the T10 League is going to be played at Sheikh Zayed Stadium, Abu Dhabi. This venue has one of the flattest and completely dead tracks we have seen in the past. We are expecting a slow, flat, and good batting surface for this match. A score of more than 120 runs should be a par score.

Adam Lyth, Iftikhar Ahmed, and Matheesha Pathirana are key players to watch in this match.

The dream11 team prediction for Bangla Tigers vs Northern Warriors 12th Match T10 League. After checking the latest player’s availability, which players will be part of both teams, and the possible tactics that the two teams might use as we had learned from previous seasons of Abu Dhabi T10 League to make the best possible Dream11 team.