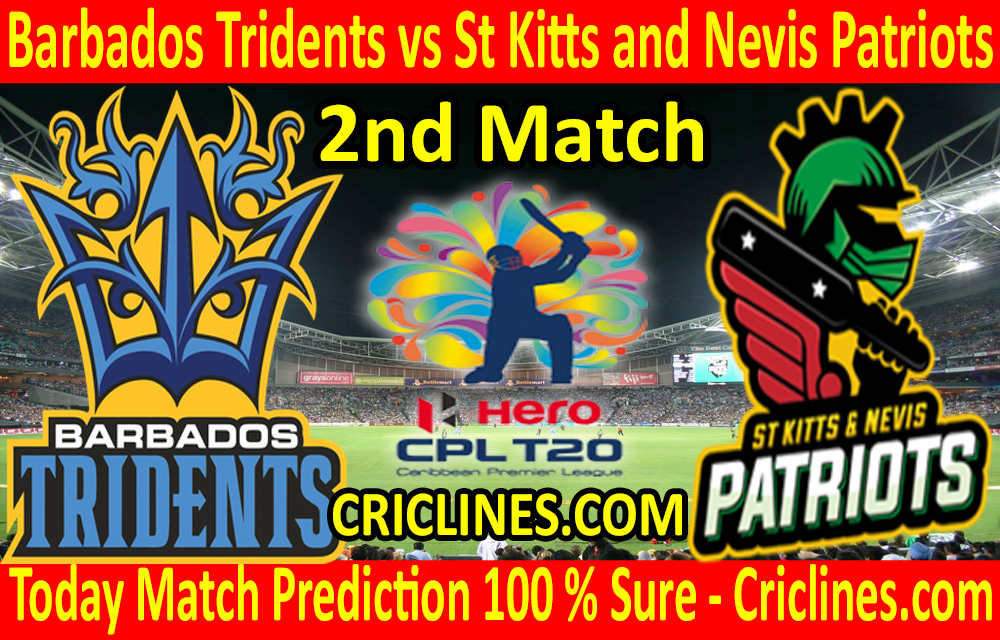 The cricket fans are ready to witness yet another big battle of the Caribbean Premier League. The 2nd Match match of CPL 2020 is scheduled to play between Barbados Tridents and St Kitts and Nevis Patriots on Tuesday, 18th August 2020 at Brian Lara Stadium, Tarouba, Trinidad. We are posting safe, accurate, and secure today match prediction for all matches of CPL free.

Barbados Tridents had won the title of CPL T20 for the two times. First in 2014 and second in 2019. This team had played a total of 72 matches in all seasons of this tournament with 33 wins to their name. They had lost 38 matches while their one match was ended with no result. The winning percentage of this team is 46.47. Barbados Tridents are the defending champions for this season of the Caribbean Premier League. The performance of this team was average in the previous season of CPL T20 till the league stage matches. They played 10 matches at the league stage with five wins to their name. They lost five matches and were holding the second position on the points table. They lost the qualifier 1 match against Guyana Amazon Warriors but win the second qualifier match against Trinbago Knight Riders and made their way to the final where they faced Guyana Amazon Warriors, a team who was un-beaten and was over the line with 11 consecutive wins. The performance of Barbados Tridents was outstanding in the grand final match and beaten the favorite team with a margin of 27 runs.

The team management of Barbados Tridents had made some key changes in the final squad for this tournament. The batting order of this team is good. Corey Anderson, Johnson Charles, Shayan Jahangir, Shai Hope, Keon Harding, Jason Holder, and Jonathan Carter are the key batsmen for this team. Rashid Khan will be leading the spin bowling unit while Ashley Nurse and Hayden Walsh are the key bowlers. This team had some best all-rounders of the shorter format of T20 cricket. Jason Holder is an all-rounder whole will be leading the Tridents in this tournament. Jonathan Carter, Mitchell Santner, Kyle Mayers, and Raymon Reifer are the key all-rounders of Barbados Tridents.

St Kitts and Nevis Patriots made their way to the Caribbean Premier League back in 2015 and they had not won any title of CPL T20 but they were runner up in the season of 2017. They had played 54 matches in their history of five years with 24 wins and 29 losses. Their one match was ended with no result and their winning ratio is 44.33%. The performance of St Kitts and Nevis Patriots was average in the previous season. They played 10 matches at the league stage with five wins and the same losses. They were situated at the third position on the points table after the end of league stage matches. They were beaten by Trinbago Knight Riders in the Eliminator match.

Like all other teams, St Kitts and Nevis Patriots also had made some key changes in their final squad for this season of CPL T20. The batting order of this team looks strong at least on papers. The batsmen like Evin Lewis, Nick Kelly, Chris Lynn, Ben Dunk, Rassie van der Dussen, and Sunny Sohal will be taking care of the batting order of Patriots. This team has the services of some best all-rounders of T20 format. Rayad Emrit, Fabian Allen, and Imran Khan are the key all-rounders. The bowling unit of this team is also good at least on papers. Alzarri Joseph, Ish Sodhi, Sohail Tanvir, Sheldon Cottrell, Dominic Drakes, and Jon-Russ Jaggesar are the players who will be handling the bowling department.

St Kitts and Nevis Patriots are full of experienced and best players of the t20 format. The batting order of this team is also strong, so the winning chances of today match for St Kitts and Nevis Patriots have been increased. The equation of who will win today’s cricket match prediction and who will win the cricket match today is mentioned as under.

The toss is going to play an important role in the result of each and every match of the Caribbean Premier T20 League as we had observed in the previous seasons. According to our toss prediction, the team who will win the toss will elect to bat first as the behavior of pitch will be the same during both innings.

The 2nd Match match of the Caribbean Premier League is going to be played at Brian Lara Stadium, Tarouba, Trinidad. We had observed in the previous matches played here that the pitch here at this venue is good for batting. The track is slower than the others we have seen and helps the spinners quite a bit. We are hoping that the surface is bound to get slower and be a bit more difficult for batting in this match. A score of 180 is going to be tough to chase.

The weather forecast for Guyana is not good for this cricket match. There is a lot of rain in the region and it is possible that we may not watch the full match.

Dream11 Prediction for Barbados Tridents vs St Kitts and Nevis Patriots 2nd Match match CPL 2020. After checking the latest players’ availability, which players will be part of both teams, he possible tactics that the two teams might use as we had leaned from previous seasons of the Caribbean Premier League to make the best possible Dream11 team.