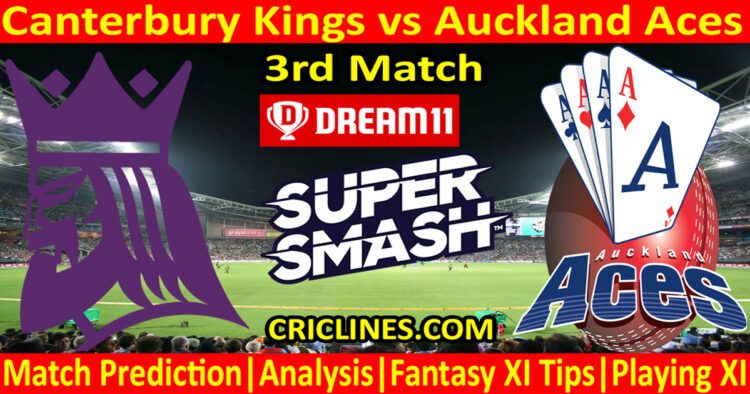 The cricket fans are ready to witness yet another big battle of T20 cricket. The 3rd match of Super Smash League 2022-23 is scheduled to play between Auckland Aces and Canterbury Kings on Monday, 26th December 2022 at Hagley Oval, Christchurch. We are posting safe, accurate, and secure today match prediction of Super Smash League.

Canterbury Kings had an ideal start to this edition of Super Smash League and had won their opening match of this tournament against Northern Knights with a big margin of nine wickets now they are going to face Auckland Aces who are going to play this very first match.

The first match of Canterbury Kings was a rain-affected match and was reduced to 14 over per side. They won the toss and decided to field first. This decision worked for this team properly as their bowling unit was just outstanding. They leaked just 96 runs in 14 overs. Henry Shipley was the most successful bowler from their side with two wickets to his name in two overs against just five runs. Ed Nuttall also picked two wickets but he leaked a lot of runs. He was charged with 34 runs in three overs.

Angus McKenzie, Todd Astle, and Blake Coburn were the bowlers who failed to pick any wicket in the previous match. The way how the batting order of Canterbury Kings performed in the previous match was just outstanding. They chased the target of 97 runs in 12.5 overs with nine wickets in hand. Chad Bowes was the most successful and highest run-scorer from their side who remained not out after scoring 57 runs on just 39 balls with the help of five boundaries and two huge sixes. Leo Carter also performed well and scored 27 runs. He faced 26 balls and smashed two boundaries and one huge six. He also remained not out till the chase of the target. Matthew Boyle scored 12 runs.

Auckland Aces had updated its squad for this edition of Super Smash League. They had picked some best players who were good in domestic cricket. Robbie O’Donnell had been appointed as the captain of the Aces. The batting order of this team is strong at least on paper. Graeme Beghin, Jamie Brown, Robbie O’Donnell (c), Mark Chapman, Louis Delport, and Danru Ferns are the leading batsmen in the squad of this team.

Ben Horne is the wicketkeeper-batsman in their squad. Auckland Aces also picked some best bowlers for this tournament. Glenn Phillips, Lockie Ferguson, and Martin Guptill are the leading bowlers of this team. Lockie Ferguson and Martin Guptill had played a lot of T20 matches for New Zealand and we are sure that these bowlers will play a main role for the Aces. It is not confirmed that both bowlers will be available for all matches but we are sure that they will play most of the matches.

The 3rd match of the Super Smash League is going to be held at Hagley Oval, Christchurch. The pitch here at this venue should be good for batting as it is in most places around New Zealand. We should have a very high-scoring match is we get some warm and sunny conditions. A score of more than 190 runs should be as par.

We had provided you with the above-mentioned Super Smash League Prediction on the basis of our research, understanding, and analysis. These prediction tips have also based on the reports which we have from our different sources. You can consider the point we had provided you and in the end, the 3rd decision will be yours that you have to make at your own risk.