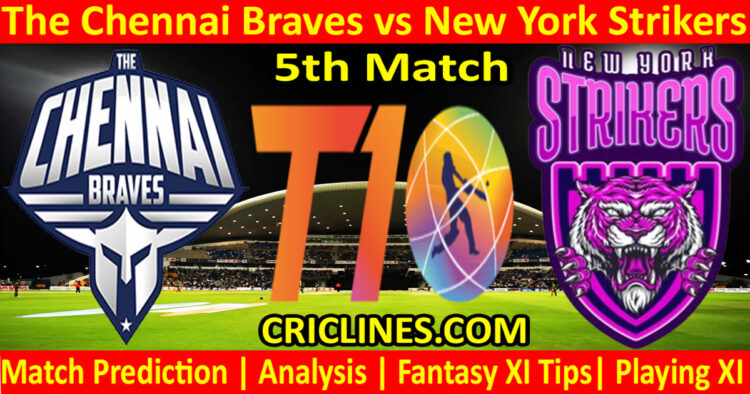 New York Strikers are the new addition to the family of the Abu Dhabi T10 League and they had got the services of the best players of white ball cricket. This is their second match as there will face Bangla Tigers in their first match. We are sure that New York Strikers are going to give a tough time to the other teams in this tournament.

The Chennai Braves were not good in the previous seasons. They had also made some major changes in their squad and we are hoping that they will perform well in this tournament. We are not sure who will be leading Chennai Braves in this tournament as they had not still announced their new captain. The batting order of this team is very strong and experienced. Ben Duckett and Laurie Evans are their two key batsmen. Some best batting all-rounders like Dasun Shanaka, Sikandar Raza, and Ross Whiteley are also part of the batting squad of Chennai Braves. Bhanuka Rajapaksa and Vriitya Aravind are wicketkeepers in this team.

The bowling unit of The Chennai Braves is also strong and they had got the services of some best bowlers of the T20 format of cricket. Carlos Brathwaite is a hard-hitter of cricket balls and he can be dangerous in the middle overs. Obed McCoy is the key bowler of this team while Maheesh Theekshana, Olly Stone, Sam Cook, Karthik Meiyappan, Sabir Rao, and James Fuller are other bowlers in the squad of Chennai Braves. Olly Stone had recently debuted in the national team of England and had been good in the recently played matches. Dawid Malan is also part of the squad on this team but we are not sure that he will be the part of final playing eleven of this match. He can join the team after two or three matches.

New York Strikers are a strong team in this tournament. They had picked some best batters in the T20 format of cricket. Eoin Morgan and Mohammad Waseem are the star batters in the squad of this team. Some big names in T20 cricket will be shining for the Strikers in this tournament. Kieron Pollard, Paul Stirling, and Jordan Thompson are batting all-rounders who are part of the squad of this team. Andre Fletcher had represented West Indies in 54 T20 matches and 25 ODI matches and he is the wicketkeeper batter of the Strikers.

The bowling unit of New York Strikers is very experienced and we are expecting that they will give a tough time to the other strong teams in this tournament. Wahab Riaz is the leading bowler of this team with Romario Shepherd, Kesrick Williams, and Akeal Hosein. Some other best bowlers of white ball cricket like Ravi Rampaul, Mohammad Farooq, Izharulhaq Naveed, Tom Hartley, and Nav Pabreja are also in the bowling squad of this side. New York Strikers are overall a strong and experienced team but this is also true that they are playing in Abu Dhabi T10 League for the first time. We are sure that it will be difficult to defeat any strong team in this tournament.

The 5th Match of the T10 League is going to be played at Sheikh Zayed Stadium, Abu Dhabi. This venue has one of the flattest and completely dead tracks we have seen in the past. We are expecting a slow, flat, and good batting surface for this match. A score of more than 120 runs should be a par score.

Kieron Pollard, Azam Khan, and Wahab Riaz are key players to watch in this match.

The dream11 team prediction for The Chennai Braves vs New York Strikers 5th Match T10 League. After checking the latest player’s availability, which players will be part of both teams, the possible tactics that the two teams might use as we had learned from previous seasons of Abu Dhabi T10 League to make the best possible Dream11 team.

We had provided you with the above-mentioned Abu Dhabi T10 Prediction on the basis of our research, understanding, and analysis. These prediction tips have also based on the reports that we have from our different sources. You can consider the point we had provided you and the decision will be yours that you have to make at your own risk.