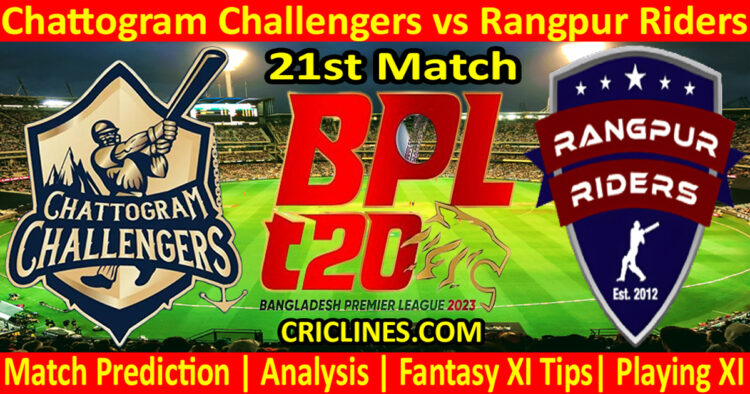 The world is ready to witness yet another big battle of T20 cricket. The 21st match of Bangladesh Premier League 2023 is scheduled to play between Chattogram Challengers and Rangpur Riders on Monday, 23rd January 2023 at Shere Bangla National Stadium, Dhaka. We are posting safe, accurate, and secure today match prediction of BPL T20.

Bangladesh Premier League season 2023 is moving back to Dhaka where four matches will be played. Chattogram Challengers had not been much impressive in this tournament and they are the second-worst-performing team right now. They had played six matches with just two wins to their name. They had lost four matches and are laying at the second position from the bottom of the ladder. Rangpur Riders also failed to give the best performance in this season of BPL. They had just two out of five matches played. They had lost three matches and are holding the fifth position on the points table.

Chattogram Challengers had lost their most recent match against Khulna Tigers by a big margin of seven wickets. They lost the toss and were asked to bat first but their batting order failed to put some big runs on the board. They scored 157 runs in 20 overs. Usman Khan had performed well in this tournament and he was the highest run-scorer in the previous match. He scored 45 runs on 31 balls with the help of seven boundaries and one huge six. Afif Hossain scored 35 runs while Darwish Rasooli could manage to score 25 runs.

The bowling unit of Chattogram Challengers had totally failed to give the best performance in this tournament and they totally failed to give the best performance in the previous match. They leaked the target of 158 runs in 19.2 overs. Nihaduzzaman was the most successful and highest run-scorer from their side with two wickets to his name in 3.2 overs against 32 runs. The skipper, Shuvagata Hom picked one wicket in three overs while he was charged for 17 runs. Mehedi Hasan Rana, Farhad Reza, Taijul Islam, Ziaur Rahman, and Afif Hossain were the bowlers who failed to pick any wicket.

Rangpur Riders were beaten by Fortune Barishal in their previous match by a big margin of 67 runs. They won the toss and decided to field first but this decision did not work and they leaked a lot of runs. They were charged for 238 runs in 20 overs. Hasan Mahmud was the most successful bowler from their side who picked two wickets in four overs against 31 runs. Haris Rauf also performed well but he leaked a lot of runs. He was charged for 42 runs in four overs. Robiul Haque, Mahedi Hasan, Shamim Hossain, and Mohammad Nawaz were the bowlers who failed to pick any wicket in the previous match.

The batting order of Rangpur Riders performed well but failed to chase a big target and scored 171 runs while chasing the target of 239 runs in 20 overs. Shamim Hossain was the most successful and highest run-scorer from their side. He scored 44 runs and remained not out. He faced 24 balls and smashed three boundaries and two huge sixes. Mohammad Nawaz was the other batsman who performed well and put some runs on the board. He scored 33 runs on 24 balls with the help of two boundaries and the same huge sixes. Mohammad Naim scored 31 runs while Saim Ayub scored 18 runs and Robiul Haque could manage to score 13 runs.

The 21st match of BPL season 2023 is going to be held at Shere Bangla National Stadium, Dhaka. The pitch at the stadium is considered to be decent for batting but it will offer some help to the spinners like every other surface in the country. A score of around 190 should be considered par at the venue. The average first-inning score at this venue is 143 runs and the average second-inning score is 124 runs. This venue has the highest total recorded of 211 runs in 20 overs.

Dream11 prediction for Chattogram Challengers vs Rangpur Riders-BPL T20-21st Match. After checking the latest player’s availability, which players will be part of both teams, and the possible tactics that the two teams might use as we had learned from previous seasons of BPL to make the best possible Dream11 team.