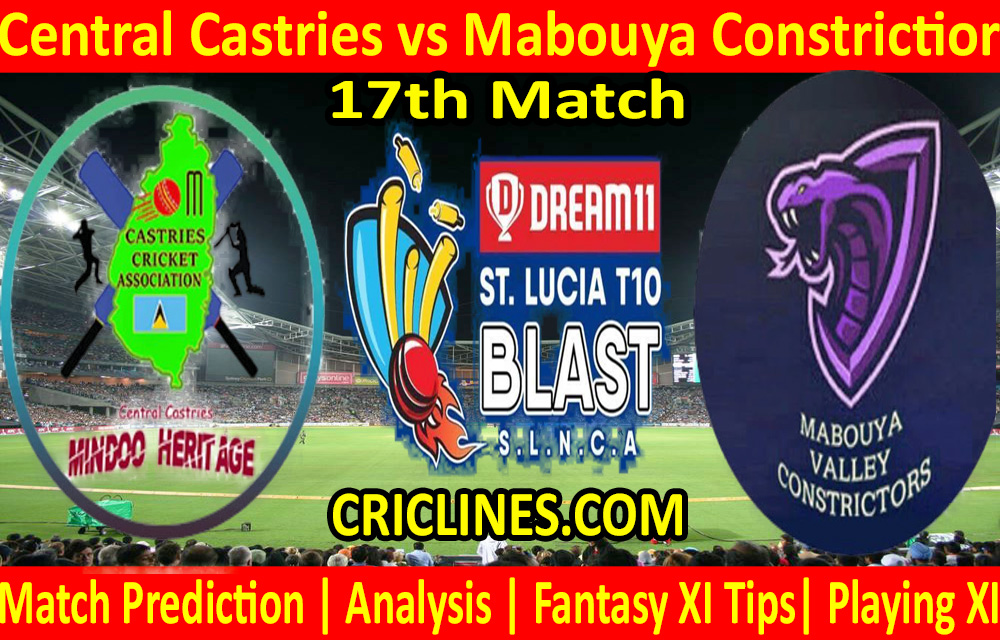 The world is ready to witness yet another big battle of T10 cricket. The 17th Match of St. Lucia T10 Blast 2021 is scheduled to play between Mabouya Constrictor and Central Castries on Saturday, 8th of May, 2021 at The Daren Sammy Cricket Ground, Gros Islet, St Lucia. We are posting safe, accurate, and secure today match prediction for all matches of SPL T10 free.

Mabouya Constrictor had played one match so far which they had lost and are laying at the 11th position on the points table. They were beaten by Micoud Eagles in their first match by the margin of 8 wickets. The batting order of this team failed to put a big total on the board and scored just 67 runs in their inning of 10 overs. Zachary Edmund was the highest run-scorer from their side who scored 29 runs with the help of three boundaries. Chard Polius was the other batsman who put some runs on the board in their very first match of this tournament. He remained not out after scoring 25 runs. He smashed one boundary and the same six during his inning. Orey Changoo scored four runs while Murgaran Shoulette and Leon Polius scored just one run each.

Like the batting, the bowling department of Mabouya Constrictor also failed to give the best performance in their first match of this season of St. Lucia T10 Blast. They failed to defend the target of 68 runs and leaked this target in just six overs. Christian Ange was the only successful bowler from their side who picked one wicket in his two overs bowled out against just 12 runs. Lennice Modeste was the other bowler who picked one wicket. He leaked 21 runs in his two overs bowled out. Shem Severin and Chard Polius were the bowlers who failed to give the best performance in the previous match. We think the Mabouya Constrictor is not a strong team and need to improve their batting and bowling departments.

Central Castries had failed to perform well in this tournament. They had lost both opening matches of this season the of St. Lucia Blast and are holding the 10th position on the points table. They were beaten by Vieux Fort North Raiders in their most recent match by the margin of seven wickets. The performance of their batting order was average in that match. They scored 82 runs in their inning of 10 overs. Dwight Thomas was the highest run-scorer from their side who remained not out after scoring 27 runs. He faced 15 deliveries and smashed one boundary and two sixes. Gaspard Prospere also had an outstanding performance with the bat. He scored 25 runs and smashed two boundaries and the same huge sixes.

Alleyn Prospere scored 12 runs while Stephen Naitram could manage to score 10 runs. The performance of the bowling department of Central Castries was not good in their most recent match. They failed to defend the target of 83 runs and leaked this target in just 6.3 overs. No bowler from their side could give the best performance. Sanjay Hayle was the only bowler who picked a wicket in his one over bowled out against nine runs. Jaden Elibox, Alleyn Prospere, Mc Kenny Clarke, Dillan John, and Jemmi Mauricette were the bowlers who failed to pick any wicket.

The 17th Match of St. Lucia T10 Blast season 2020 is scheduled to be held at The Daren Sammy Cricket Ground, Gros Islet, St Lucia. A blowing favored pitch is expected. A score near about 100 can be difficult for the chasing team.