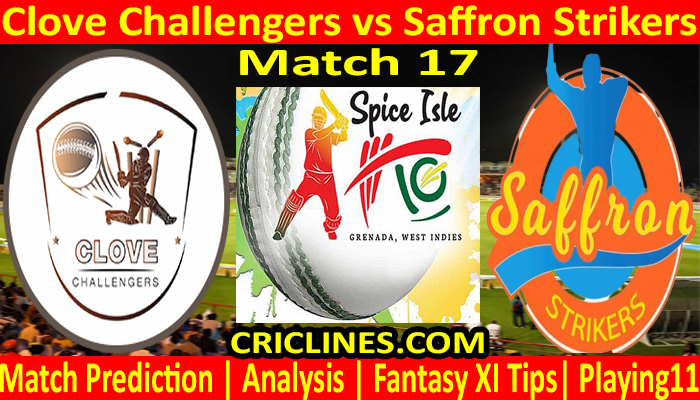 The cricket fans are ready to witness yet another big battle of T10 cricket. The 17th Match of Spice Isle T10 League 2021 is scheduled to play between Saffron Strikers and Clove Challengers on Saturday, 5th June 2021 at National Cricket Stadium, St George’s, Grenada, St George’s. We are posting safe, accurate, and secure today match prediction for all matches of Spice Isle T10 League free.

Clove Challengers had performed well in this tournament. They had played five matches with three wins to their name. They had lost two matches and are situated at the third position on the points table. They were beaten by Bay Leaf Blasters in their most recent match by the margin of eight wickets. Their batting order almost failed to give the best performance. They could manage to score 80 runs in their inning of 10 overs. Teddy Bishop was the most successful batsman from their side who scored 18 runs on just eight deliveries with the help of three boundaries and one huge six.

Melvin Gordon also scored 18 runs while Casimir Thomas remained not out after scoring 13 runs. Like the batting, the bowling department of Clove Challengers also failed to give the best performance in the previous match. They failed to defend the target of 81 runs and leaked this target in 8.2 overs. Jeron Noel was the only successful bowler from their side who picked one wicket in his two overs bowled out against 16 runs. Denroy Charles also picked one wicket while he was charged for 16 runs in his 1.2 overs bowled out. Deyna George, Jamie Buddy, and Darron Nedd were the bowlers who failed to pick any wicket.

Saffron Strikers is the best performing team of this season of the Spice Isle T10 League. They had played five matches with three wins. They had lost two matches and are leading the points table but they are tied in the points with Cinnamon Pacers and Clove Challengers. They had lost their most recent match against Bay Leaf Blasters by a handsome margin of seven wickets. The performance of their batting order was good in the previous match. They scored a total of 119 runs in their inning of 10 overs. Lendon Lawrence was the most successful and highest run-scorer from their side who remained not out after scoring 64 runs. He faced 31 deliveries and smashed six boundaries and five huge sixes. Mickel Joseph was the other batsman who put some runs on the board.

Mickel Joseph scored 30 runs on 16 balls with the help of three sixes and one boundary. Saffron Strikers lost the previous match due to the worst-performing by their bowling unit. They failed to defend the target of 120 runs and leaked this target in just 8.3 overs. Sherman Lewis, Mickel Joseph, and Alex Moses picked one wicket each while Laurie Williams, Ryan John, and John Olive were the bowlers who failed to pick any wicket. Sherman Lewis was the worst performer who leaked 35 runs in just two overs bowled out.

The toss is playing a key role in the decision of all matches of Spice Isle T10. According to our toss prediction, the team that will win the toss may choose to field first.

The 17th Match of Spice Isle T10 season 2021 is scheduled to be held at National Cricket Stadium, St George’s, Grenada, St George’s. Fewer matches had been played here. A score near about 110 can be difficult for the chasing team.