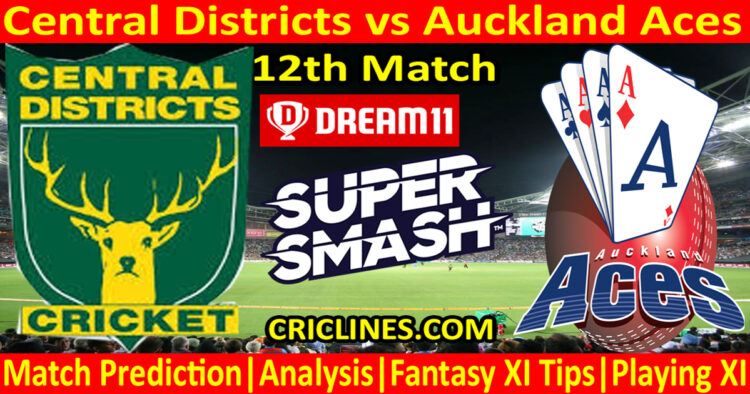 The cricket fans are ready to witness yet another big battle of T20 cricket. The 12th match of Super Smash League 2022-23 is scheduled to play between Auckland Aces and Central Districts on Thursday, 5th January 2023 at Pukekura Park, New Plymouth. We are posting safe, accurate, and secure today match prediction of Super Smash League free.

Central Districts had performed well in this tournament till now. They had played three matches with two wins to their name. They had lost one match and are holding the third position on the points table. They have their key players in good form and we think that they will perform well in this match. The performance of Auckland Aces had not been much impressive in this tournament. They had won just one out of three matches played. They had lost one match while their one match was tied. They are laying at the second position from the bottom of the ladder.

Central Districts had won their most recent match against Northern Knights with a margin of three wickets. This was a high-scoring match where they won the toss and decided to field first but their bowling unit totally failed to give the best performance and they leaked 217 runs in 20 overs. The skipper, Tom Bruce was the only successful bowler from their side with three wickets to his name in three overs against 35 runs. Raymond Toole also picked three wickets while he was charged with 44 runs in four overs. D Bracewell picked two wickets in four overs against 30 runs while Jayden Lennox had one wicket to his name.

Central Districts won the previous match due to the outstanding performance of their batting order. They chased the target of 218 runs in 19.4 overs with three wickets in hand. Almost all batsmen from their side put some runs on the board. Josh Clarkson was the most successful and highest run-scorer from their side with 58 runs to his name on just 29 balls with the help of six boundaries and three huge sixes. Doug Bracewell also performed well and scored 38 runs. He faced 18 balls and smashed five huge sixes during his inning. Dane Cleaver scored 32 runs while Ross Taylor scored 30 runs on just 14 balls with the help of one boundary and three huge sixes. Ben Smith scored 16 runs.

Adithya Ashok and Mark Chapman were the bowlers who failed to pick any wicket. The batting order of Auckland Aces performed well but failed to chase the target of 175 runs and leveled the score of 174. Sean Solia was the most successful and highest run-scorer from their side with 39 runs to his name on 29 balls with the help of three boundaries and two huge sixes. The skipper, Robert O’Donnell also performed well with the bat and scored 28 runs. He faced 21 balls and smashed four boundaries and one huge six. Mark Chapman also performed well with the bat and scored 25 runs while Cole Briggs had 24 runs to his name and Ben Horne scored 23 runs.

The 12th match of Super Smash League is going to be held at Pukekura Park, New Plymouth. The pitch here at this venue should be good for batting as it is in most places around New Zealand. We should have a very high-scoring match if we get some warm and sunny conditions. A score of more than 190 runs should be as par.

The weather forecast for New Plymouth for today’s match is not good. There are some chances of rain but we are hoping that there will be no disturbance during this match.

We had provided you with the above-mentioned Super Smash League Prediction on the basis of our research, understanding, and analysis. These prediction tips have also based on the reports we have from our different sources. You can consider the point we had provided you and in the end, the 12th decision will be yours that you have to make at your own risk.