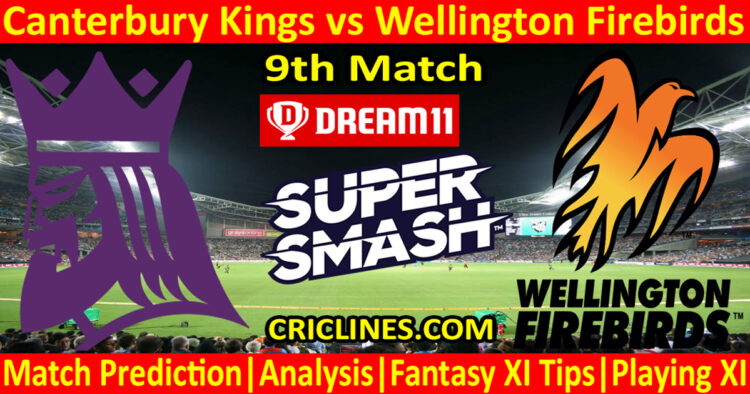 The cricket fans are ready to witness yet another big battle of T20 cricket. The 9th match of Super Smash League 2022-23 is scheduled to play between Wellington Firebirds and Canterbury Kings on Sunday, 1st January 2023 at Hagley Oval, Christchurch. We are posting safe, accurate, and secure today match prediction of Super Smash League.

Canterbury Kings had not been much impressive in this tournament. They had played three matches with just one win to their name. They had lost two matches and are holding the fourth position on the ladder. Wellington Firebirds had just been outstanding in this edition of Super Smash League. They won their both played matches and are currently leading the points table.

Canterbury Kings were beaten by Central Districts in their most recent match by the margin of four wickets where they won the toss and decided to bat first. The performance of their batting order was just outstanding and they put a total of 186 runs on the board in 20 overs. Almost all batsmen from their side put some runs on the board. Leo Carter was the most successful and highest run-scorer from their side with 88 runs to his name. He faced 63 balls and smashed ten boundaries and two huge sixes. Cam Fletcher also perform well and remained not out after scoring 35 runs on 23 balls with the help of one boundary and two huge sixes.

McConchie scored 23 runs while Bowes had 23 runs to his name. Canterbury Kings lost the previous match due to the worst performance by their bowling unit. They failed to defend the target of 187 runs and leaked this target in 19.1 overs. Henry Shipley was the only successful bowler from their side with two wickets to his name in three overs against 30 runs. Ed Nuttall also picked two wickets but he leaked a lot f runs. He was charged for 53 runs in just three overs. Blake Coburn and William ORourke picked one wicket each while Todd Astle and the skipper, Cole McConchie were the bowlers who failed to pick any wicket. The batting order of Canterbury Kings is performing well but they should upgrade their bowling unit to get better results.

The most recent match of Wellington Firebirds was very interesting against Central Districts which they won with a margin of just two runs. They lost the toss and were asked to bat first. The way how their batting order performed in that match was just outstanding. They scored 214 runs in 20 overs. Almost all batsmen from their side put some runs on the board. Nick Kelly was the most successful and highest run-scorer from their side. He scored 58 runs while he faced just 25 balls and smashed eight boundaries and three huge sixes.

The 9th match of Super Smash League is going to be held at Hagley Oval, Christchurch. The pitch here at this venue should be good for batting as it is in most places around New Zealand. We should have a very high-scoring match is we get some warm and sunny conditions. A score of more than 190 runs should be as par.

We had provided you with the above-mentioned Super Smash League Prediction on the basis of our research, understanding, and analysis. These prediction tips have also based on the reports that we have from our different sources. You can consider the point we had provided you and in the end, the 9th decision will be yours that you have to make at your own risk.