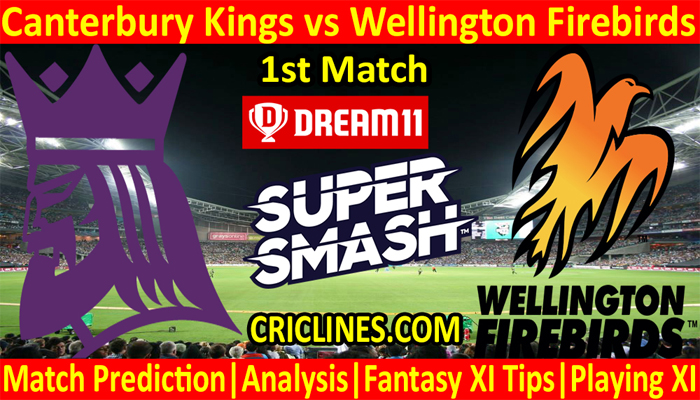 The world is ready to witness yet another big battle of T20 cricket. The 1st match of Super Smash League 2021-22 is scheduled to play between Wellington Firebirds and Canterbury Kings on Friday, 26th November 2021 at Hagley Oval, Christchurch. We are posting safe, accurate, and secure today match prediction of Super Smash League free.

Canterbury Kings was the third-best performing team of the previous edition of Super Smash League after the end of league stage matches. They beat Central Districts and made their way to the final but were beaten by the same team, Wellington Firebirds in the final. Canterbury Kings are one of the consistent teams of this tournament and won the title of Super Smash League just once.

Canterbury Kings is overall a strong and balanced team. They had added some young players to their side which had made the batting and bowling unit of this team very strong. Chad Bowes and Ken McLure will open the batting inning for this team. Jack Boyle and Colin McConchie will be handling the middle batting order. The bowling department of this team is also strong and experienced. Todd Astle, Matt Henry, and Ed Nuttall are the key bowlers of this side.

Wellington Firebirds is one of the strongest teams of this tournament but their key players will be available in this match as they are with the national team on the tour of India. Michael Bracewell, James Neesham, Rachin Ravindra, and Devon Conway will join the team later in this tournament while Michael Bracewell, Hamish Bennett, Logan van Beek, and Finn Allen are available for this match.

Head to Head Record Between Canterbury Kings and Wellington Firebirds

The 1st match of Super Smash League is going to be held at Hagley Oval, Christchurch. The pitch here at this venue should be good for batting as it is in most places around New Zealand. We should have a very high-scoring match if we get some warm and sunny conditions. A score of more than 180 runs should be as par.

We had provided you with the above-mentioned Super Smash T20 League prediction on the basis of our research, understanding, and analysis. These prediction tips have also based on the reports which we have from our different sources. You can consider the point we had provided you and in the end, the final decision will be yours.