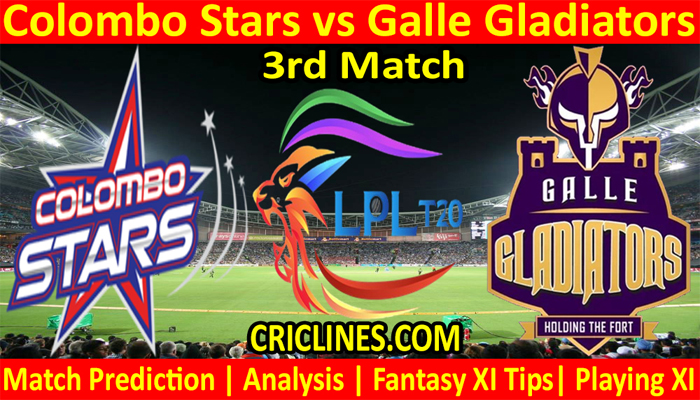 The world is ready to witness yet another big battle of the Lanka Premier League. The 3rd match of LPL T20 is scheduled to play between Colombo Stars and Galle Gladiators on Monday, 6th December 2021 at R.Premadasa Stadium, Colombo. We are posting safe, accurate, and 100% secure today match prediction of LPL T20 free.

Colombo Kings are renamed as Colombo Stars in this 2nd edition of Lanka Premier League. They were the best performing team of the 1st season of LPL T20 where they won six out of eight matches played at the league stage. They lost just two matches and were leading the points table. They were unlucky as they were beaten by the same team, Galle Gladiators in the 1st semi-final match.

Galle Gladiators had a good start to this second season of LPL T20 and had won their opening match against Jaffna Kings with a handsome margin of 54 runs. This win will help the Gladiators to get some confidence and momentum for the next matches.

Colombo Stars had changed their name also had made some key changes in their squad for this season of Lanka Premier League. Angelo Mathews had been selected as the captain of the Stars. The batting order of this team is good but not much strong when we compare it with the other teams of this tournament. Chris Gayle is the only hard hitter in the squad of this team and has a big responsibility of scoring the runs for this team. Pathum Nissanka, Nuwanidu Fernando, and Hashan Dumindu are the lead batsmen of Colombo Stars.

Some best batting and bowling all-rounders of the T20 format of cricket are also part of the squad of the Stars. Dhananjaya de Silva, Ashan Priyanjan, Sherfane Rutherford, and Haris Sohail are batting all-rounders in this team while Malindu Maduranga, Kusal Perera, Dinesh Chandimal, and Tom Banton are wicket-keeper batsmen of Colombo Stars. The bowling department of this team is young and un-experienced. Dushmantha Chameera, Lakshan Sandakan, Seekkuge Prasanna, Jehan Daniel, and Akila Dananjaya are the leading bowlers of the Stars.

Galle Gladiators is a strong side and they had proved this in their very first match of this tournament. They were put in to bat first after losing the toss. The performance of their batting order was good. They scored a total of 164 runs in their inning of 20 overs. The skipper, B Rajapaksa was the most successful and highest run-scorer for their side who scored 56 runs on just 31 deliveries with the help of six boundaries and four huge sixes. Samit Patel also had an outstanding performance with the bat. He scored 42 runs while he faced 31 balls and smashed six boundaries during his inning.

The bowling unit of Galle Gladiators also performed well in the previous match. They defended the target of 165 runs and leaked 110 runs. They send all team of Jaffna Kings back to the pavilion in just 18.4 overs. Samit Patel was the most successful and highest wicket-taker from their side who picked three wickets in his four overs bowled out against 21 runs. Mohammad Hafeez also performed well and picked two wickets in his four overs while he was charged for just 11 runs. Mohammad Hafeez also picked two wickets while Nuwan Thushara, Noor Ahmad, and Lahiru Madushanka picked one wicket each.

The 3rd match of Lanka Premier League is going to be held at the R.Premadasa Stadium, Colombo. We had observed in the previous matches played here that the pitch here at this venue is good for batting. The track is slower than the others we have seen and helps the spinners quite a bit. We are hoping that the surface is bound to get slower and be a bit more difficult for batting in this match. A score of 185 is going to be tough to chase.

Dream11 fantasy team lineup prediction for Colombo Stars vs Galle Gladiators 3rd Match LPL 2021. After checking the latest player’s availability, which players will be part of both teams, he possible tactics that the two teams might use as we had learned from previous seasons of Lanka Premier League to make the best possible Dream11 team.

We had provided you with the above-mentioned Lanka Premier League Prediction on the basis of our research, understanding, and analysis. These prediction tips have also based on the reports which we have from our different sources. You can consider the point we had provided you and in the end, the final decision will be yours.