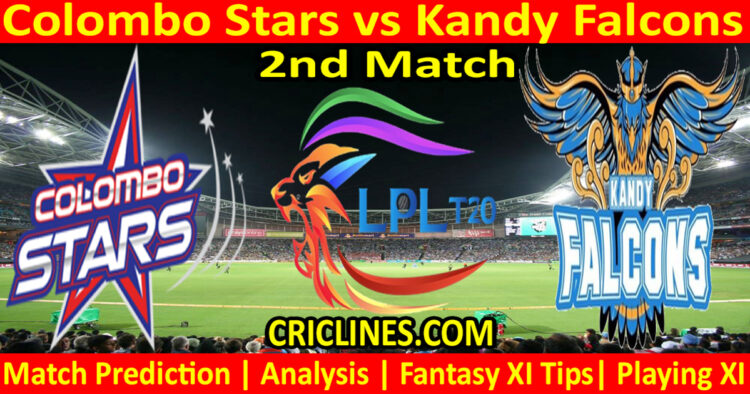 The cricket fans are ready to witness yet another big battle of the Lanka Premier League. The 2nd match of LPL T20 is scheduled to play between Colombo Stars and Kandy Falcons on Tuesday, 7th December 2022 at Mahinda Rajapaksa International Stadium, Hambantota. We are posting safe, accurate, and 100% secure today match prediction of LPL T20.

The performance of Colombo Stars was good in the previous edition of the Lanka Premier League. They played eight league matches with four wins to their name. They lost four matches and were holding the third position on the points table. They were beaten by Dambulla Giants in the eliminator match.

Kandy Warriors had been renamed Kandy Falcons in this season of LPL T20. They were the worst performers in the previous edition of this tournament. They could manage to win just two out of eight matches played. They lost six matches and were laying at the bottom of the ladder. Will the name change bring good luck to this team? some early matches of this tournament will answer this question.

Colombo Stars had made some interesting changes in their squad for this season of the Lanka Premier League. They had not picked any regular batsman while a total of six batting all-rounders are part of this squad of this team and they also have three wicket-keeper batsmen. Angelo Mathews is the new captain of Colombo Stars and he will be leading the batting order of this team with Charith Asalanka, Dhananjaya Lakshan, Chathuranga Kumara, Navod Paranavithana, Benny Howell, and Ravi Bopara. Dinesh Chandimal, Niroshan Dickwella, and Nishan Madushka are wicketkeeper batsmen in the squad of the Stars.

Colombo Stars got the services of some best bowlers of the shorter format of cricket and we are sure that they will give a tough time to the batters of almost all teams. Naveen-ul-Haq and Karim Janat are the leading bowlers of this team. These both players had played in the recent season of the Abu Dhabi T10 League and had performed well. We are hoping that both bowlers will also perform well in this tournament. Seekkuge Prasanna and Dominic Drakes are other experienced bowlers in the squad of the Stars. Dominic Drakes was just outstanding in the recent season of CPL and we are hoping for his best performance. Jeffrey Vandersay, Muditha Lakshan, Lakshitha Manasinghe, Romario Shepherd, Kasun Rajitha, and Suranga Lakmal are also available for the selection of the final playing eleven of this match.

Kandy Falcons also had changed their main players with the name change. They had selected some best and match-winning players from the auctions and we are sure that they will perform well in this season of LPL T20. The batting order of this team is strong and experienced at least on paper. Kaveen Bandara, Najibullah Zadran, and Pathum Nissanka are key batters of this team while Fabian Allen, Janith Liyanage, Kamindu Mendis, and Ashan Priyanjan are batting all-rounders in this team. Wanindu Hasaranga is the new skipper of the Falcons. Andre Fletcher, Lasith Abeyratne, Minod Bhanuka, and Avishka Perera are wicketkeepers in the squad of the Kandy Falcons.

Kandy Falcons had picked the best bowlers of T20 cricket from different cricket nations for this tournament. They are very rich in the bowling department and we are hoping that it will not be easy for the batsmen of other teams to put a big total on the board against the bowling unit of the Falcons. Chamika Karunaratne, Isuru Udana, Oshane Thomas, Matheesha Pathirana, Ashen Bandara, Ashian Daniel, Ahmed Daniyal, and Chamindu Wijesinghe are leading bowlers in the squad of Kandy Falcons. The management of Kandy Falcons had made some smart decisions and they had made major changes in the batting order and bowling unit. We are sure that these changes will work for this team and they will perform well in this tournament. A couple of early matches will also indicate this.

The 2nd Match of the Lanka Premier League is going to be held at the Mahinda Rajapaksa International Stadium, Hambantota. We had observed in the previous matches played here that the pitch here at this venue is good for batting. The track is slower than the others we have seen and helps the spinners quite a bit. We are hoping that the surface is bound to get slower and be a bit more difficult for batting in this match. A score of 185 is going to be tough to chase.

Dream11 fantasy team lineup prediction for Colombo Stars vs Kandy Falcons 2nd Match LPL 2022. After checking the latest player’s availability, which players will be part of both teams, and the possible tactics that the two teams might use as we had learned from previous seasons of Lanka Premier League to make the best possible Dream11 team.