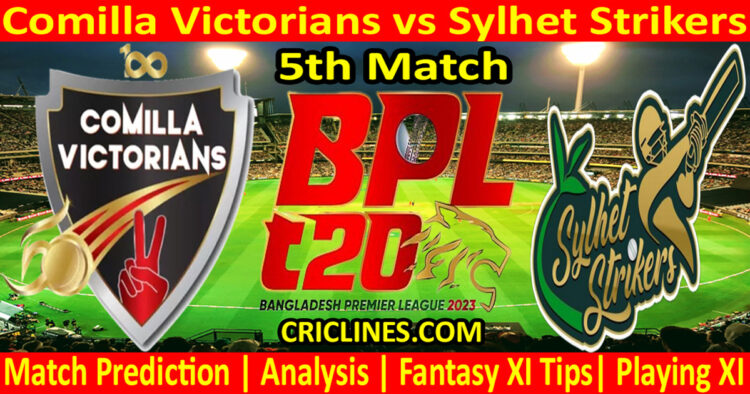 The cricket fans are ready to witness yet another big battle of T20 cricket. The 5th match of Bangladesh Premier League 2023 is scheduled to play between Comilla Victorians and Sylhet Strikers on Monday, 9th January 2023 at Shere Bangla National Stadium, Dhaka. We are posting safe, accurate, and secure today match prediction of BPL T20 free.

Comilla Victorians are a strong team but they totally failed to give the best performance in their very first match of this tournament and they their very first match against Rangpur Riders by a big margin of 34 runs. The way how Sylhet Strikers performed in this tournament is just outstanding. They had won their both played matches till now and are leading the points table.

Comilla Victorians totally failed to give the best performance in almost each and every department of the game in their first match against Rangpur Riders. They won the toss and decided to field first but their bowling unit did not perform well and leaked 176 runs in 20 overs. The best bowlers of T20 cricket like Fazalhaq Farooqi, Mohammad Nabi, Mustafizur Rahman, Mosaddek Hossain, and Khushdil Shah are part of the bowling unit of Victorians but failed to stop the batting order of Riders from scoring runs. Khushdil Shah was the most successful bowler with one wicket to his name in four overs against 25 runs.

Mosaddek Hossain picked one wicket in two overs while he was charged with 13 runs. Mustafizur Rahman and Fazalhaq Farooqi also picked one wicket each while Mohammad Nabi and Ashiqur Zaman were the bowlers who failed to pick any wicket. The batting order of Comilla Victorians totally failed to give the best performance. They could manage to score 142 runs and their full team came back to the pavilion in 19.1 overs while chasing the target of 177 runs. The skipper, Imrul Kayes was the most successful and highest run-scorer from their side with 35 runs to his name on 23 balls with the help of four boundaries and one huge six. Jaker Ali scored 19 runs while Dawid Malan could manage to score 17 runs and Shykat Ali had 16 runs to his name.

Sylhet Strikers had just been outstanding in both previous matches. They won their first match against Chattogram Challengers and then beat Fortune Barishal in their second match with a handsome margin of six wickets where they lost the toss and were asked to field first. The performance of their bowling unit was very poor and they leaked 194 runs in 20 overs. Almost all bowlers from their side leaked plenty of runs. Mashrafe Mortaza was the most successful bowler from their side with three wickets to his name in four overs against 48 runs. Imad Wasim, Rejaur Rahman Raja, and Thisara Perera picked one wicket each.

Mohammad Amir and Colin Ackermann were the bowlers who could not manage to pick any wicket. Sylhet Strikers won the previous match due to the best performance by their batting order. They chased the target of 195 runs in 19 overs. Towhid Hridoy was the most successful and highest run-scorer from their side scoring 55 runs in 34 balls with the help of seven boundaries and one huge six. Najmul Hossain Shanto also had an outstanding performance with the bat. He faced 40 balls and smashed five boundaries and one huge six. Zakir Hasan was the other batsman who put some runs on the board. He scored 43 runs on just 18 balls with the help of four boundaries and three huge sixes. The skipper, Mushfiqur Rahim scored 23 runs while Thisara Perera had 20 runs to his name. Thisara Perera and Mushfiqur Rahim remained not out till the chase of the target.

The 5th match of BPL season 2023 is going to be held at Shere Bangla National Stadium, Dhaka. The pitch at the stadium is considered to be decent for batting but it will offer some help to the spinners like every other surface in the country. A score of around 190 should be considered par at the venue. The average first-inning score at this venue is 152 runs and the average second-inning score is 130 runs. This venue has the highest total recorded of 211 runs in 20 overs.

Dream11 prediction for Comilla Victorians vs Sylhet Strikers-BPL T20-5th Match. After checking the latest player’s availability, which players will be part of both teams, the possible tactics that the two teams might use as we had learned from previous seasons of BPL to make the best possible Dream11 team.

We had provided you with the above-mentioned BPL Prediction on the basis of our research, understanding, and analysis. These prediction tips have also based on the reports which we have from our different sources. You can consider the point we had provided you and in the end, the decision will be yours that you have to make at your own risk.