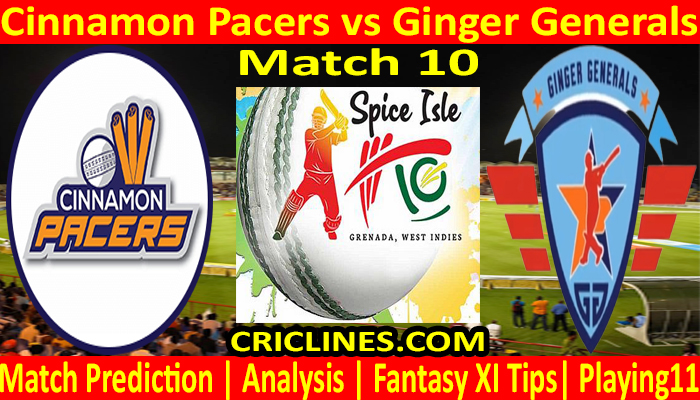 The cricket fans are ready to witness yet another big battle of T10 cricket. The 10th Match of Spice Isle T10 League 2021 is scheduled to play between Ginger Generals and Cinnamon Pacers on Thursday, 3rd June 2021 at National Cricket Stadium, St George’s, Grenada, St George’s. We are posting safe, accurate, and secure today match prediction for all matches of Spice Isle T10 League free.

Cinnamon Pacers had performed well in this season of the Spice Isle T10 League. They had played a total of three matches with two wins to their name. They had lost just one match and are holding the 3rd position on the points table right now. They are coming to this match on the back of a massive win over Saffron Strikers with a margin of 10 runs. The performance of their batting order was just good in the previous match. They scored a total of 121 runs in their inning of 10 overs.

Alick Athanaze was the most successful and highest run-scorer from their side who remained not out after scoring 78 runs. He faced 39 deliveries and smashed six boundaries and the same huge sixes. Heron Campbell also performed well and scored 30 runs. The bowling unit of Cinnamon Pacers also performed well in the previous match and defended the target of 122 runs. They leaked 111 in their inning of 10 overs. Kenroy Peters was the highest wicket-taker from their side who picked three wickets in his two overs bowled out against 23 runs. Chard Charles and Micah Narine picked one wicket each while Reuel Williams, Javel St.Paul, and Adel Beggs were the bowlers who failed to pick any wicket.

The performance of Ginger Generals had been good in this tournament. They also had played three matches with two wins to their name. They had lost just one match and are situated at the 2nd position on the points table. They had won their most recent match against Nutmeg Warriors with a margin of 14 runs. The batting order of this team performed well and scored 120 runs in their 10 overs inning. Benjamin Wavel was the most successful batsman from their side who smashed the inning of 53 runs on 26 balls with the help of seven boundaries and two sixes. Roland Cato also performed well with the bat and put 43 runs on the board.

Like the batting, the bowling department of Ginger Generals also performed well in the most recent match. They defended the target of 121 runs and leaked 106 runs in their inning of 10 overs. Redhead Nicklaus was the most successful and highest wicket-taker from their side who picked four wickets in his two overs bowled out while he was charged for 23 runs. Nelon Pascal, Larry Edwards, and Fraser Michael picked one wicket each while Mc Donald Daniel and Charles Reynold were the bowlers who failed to pick any wicket.

The 10th Match of Spice Isle T10 season 2021 is scheduled to be held at National Cricket Stadium, St George’s, Grenada, St George’s. Fewer matches had been played here. A score near about 110 can be difficult for the chasing team.