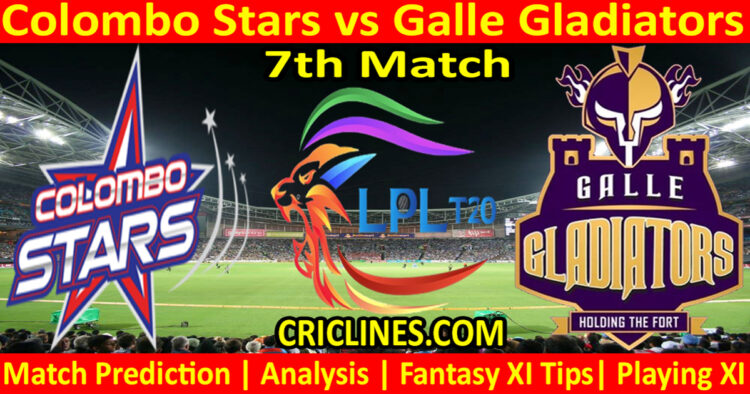 The world is ready to witness yet another big battle of the Lanka Premier League. The 7th match of LPL T20 is scheduled to play between Colombo Stars and Galle Gladiators on Sunday, 11th December 2022 at Pallekele International Cricket Stadium, Pallekele. We are posting safe, accurate, and 100% secure today match prediction of LPL T20.

The performance of the Colombo Stars had been average in this tournament. They had played two matches with one win to their name. They had lost one match and are holding the third position on the ladder. They had won their most recent match against Dambulla Aura.

Galle Gladiators is a strong and experienced team but they had totally failed to give the best performnace in the season of the Lanka Premier League. They are currently the worst-performing team in this tournament. They had lost their both played matches and are laying at the bottom of the points table.

The most recent match of Colombo Stars was very interesting against Dambulla Aura where they won with a margin of just nine runs. They won the toss and decided to bat first. The performance of their batting order was good and they scored 165 runs in 20 overs. Dickwella was the most successful and highest run-scorer from their side with 62 runs to his name on 41 balls with the help of eight boundaries and two huge sixes. Chandimal also performed well and remained not out after scoring 29 runs. He faced 23 balls and smashed two boundaries and one huge six.

Ravi Bopara also performed well and scored 26 runs while Dominic Drakes had 18 runs to his name. The bowling unit of Colombo Stars did not perform well but they defended the target of 166 runs and leaked 156 runs in 20 overs. Suranga Lakmal was the most successful and highest run-scorer from their side with two wickets to his name in four overs against 29 runs. Dominic Drakes also picked two wickets while he was charged with 35 runs in four overs. Karim Janat was the other bowler with two wickets to his name in three overs while he leaked 30 runs. Naveen-ul-Haq picked one wicket while Charith Asalanka, Jeffrey Vandersay, Ravi Bopara, and Angelo Mathews were the bowlers who failed to pick any wicket.

Galle Gladiators were beaten by Kandy Falcons in their most recent match by the margin of five wickets. They won the toss and decided to bat first but their batting order totally failed to give the best performance and could manage to score just 121 runs in 20 overs. Movin Subasingha was the most successful and highest run-scorer from their side with 40 runs to his name on 38 balls with the help of four boundaries and two huge sixes. Imad Wasim was the other batsman who put some runs on the board. He scored 34 runs while the skipper, Kusal Mendis could manage to score just 14 runs.

The key batsmen of Galle Gladiators like Thanuka Dabare, Azam Khan, and Iftikhar Ahmad totally failed to give the best performance in the previous match. The bowling unit of Galle Gladiators could not defend a low target on the board and leaked the target of 122 runs in just 15 overs. Nuwan Pradeep was the highest wicket-taker from their side but he leaked plenty of runs. He picked two wickets while he was charged for 34 runs in three overs. Nuwan Thushara, Iftikhar Ahmed, and Pulina Tharanga picked one wicket each while Wahab Riaz and Imad Wasim were the bowlers who failed to pick any wicket in the most recent match.

The 7th Match of the Lanka Premier League is going to be held at the Pallekele International Cricket Stadium, Pallekele. We had observed in the previous matches played here that the pitch here at this venue is good for batting. The track is slower than the others we have seen and helps the spinners quite a bit. We are hoping that the surface is bound to get slower and be a bit more difficult for batting in this match. A score of 185 is going to be tough to chase.

Dream11 fantasy team lineup prediction for Colombo Stars vs Galle Gladiators 7th Match LPL 2022. After checking the latest player’s availability, which players will be part of both teams and the possible tactics that the two teams might use as we had learned from previous seasons of Lanka Premier League to make the best possible Dream11 team.