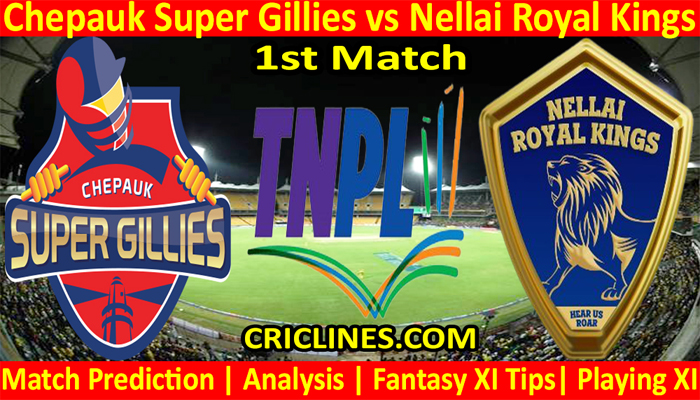 The cricket fans are ready to witness yet another big battle of the TNPL T20 League. The 1st match of Tamil Nadu Premier League 2022 is scheduled to play between Chepauk Super Gillies and Nellai Royal Kings on Thursday 23rd June 2022 at Indian Cement Company Ground, Tirunelveli. We are posting safe, accurate, and secure today match prediction of TNPL free.

TNPL is one of the famous domestic cricket leagues in India which is working under the Tamil Nadu Cricket Asociation. In the 1st match of the TNPL season, 2022 Chepauk Super Gillies are the defending champions as they won the previous edition of this league. Nellai Royal Kings could not perform well in the previous edition of the Tamil Nadu Premier League.

Chepauk Super Gillies was the second-best performing team of TNPL 2021 after the end of the league stage matches. They beat Ruby Trichy Warriors in the final match after an interesting competition. Kaushik Gandhi is going to lead CSG in TNPL 2022. He is a good batter and has a decent record in domestic cricket. He will be leading the batting order of Chepauk Super Gillies with Uthirasamy Sasidev, Rajagopal Sathish, and S Harish Kumar.

Nellai Royal Kings could not perform well as many of the fans this team was expecting. They played seven matches in the league round with three wins and the same losses. Their one match was washed out by the rain and they were situated at the fifth position on the ladder. They had made some major changes in their squad for this edition. Baba Aparajith will be leading NRK in TNPL 2022. He is a batting all-rounder. The batting order of the Kings is good but not strong when we compare it with CSG. Baba Indrajith, Laxmesha Suryaprakash, G Ajitesh, Krish Jain, M Rooban Raj, Vikram Jangid, and G Satheesh Kumar are the star batters of NRK.

The bowling department of Nellai Royal Kings is strong and experienced and they have a lot of bowlers to choose the best playing XI. V Athisayaraj Davidson, NS Harish, Trilok Nag, T Veeramani, Rohan Raju, Jitendra Kumar, Sri Niranjan, Karthick Manikandan, Sanjay Yadav, and Akash Dev Kumar are the leading bowler of NRK. M Shajahan, Arya Yohan Menon, and K Easwaran are batting all-rounders in the squad of Nellai Royal Kings while Pradosh Paul is the only wicket-keeper batter on this side.

The 1st Match match of Tamil Nadu Premier League season 2022 is scheduled to be held at Indian Cement Company Ground, Tirunelveli. The pitch here at this venue is flat and good for batting as there is no bounce and pace. Out-field at this venue is very fast and the ball will travel to the boundary very quickly. It also has a lot of help for the spin bowlers but almost all teams in this tournament have a strong batting order so this does not matter. According to the live cricket score, a total of 180 runs should be a par score.

While we had a deep look at the squad, we think that Nellai Royal Kings is going to perform well in this match the TNPL T20 season 7 as they have a couple of players who can change the game. In this match, the batting department of the Nellai Royal Kings is much stronger as compared to the Chepauk Super Gillies. We also have reports from different sources for the win of the DDS.

We had provided you with the above-mentioned today prediction on the basis of our research, understanding, and analysis. You can consider the point we had provided you and in the end, the 1st Match decision will be yours.