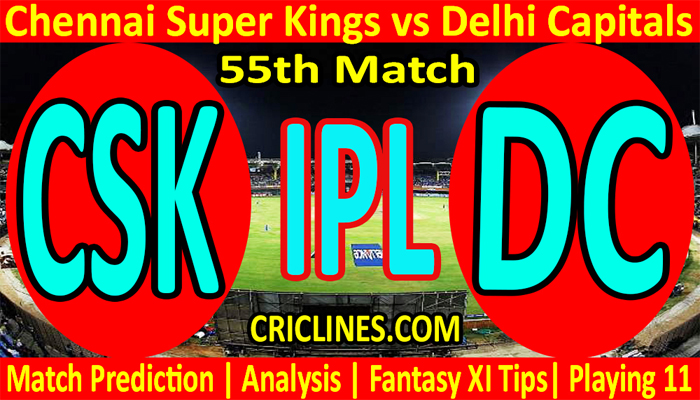 The world is ready to witness yet another big battle of the IPL 2022. The 55th match of the Indian Premier League 2022 is scheduled to play between Chennai Super Kings and Delhi Capitals on Sunday, 8th May 2022 at Dr. DY Patil Sports Academy, Mumbai. We are posting safe, accurate, and 100% secure today match prediction of IPL T20 2022 with live IPL score and ball by ball updates with prediction.

Chennai is almost out of the race to the playoff but they still have some chances to qualify for that, they have to win all remaining matches with a handsome margin as they need to improve the net run rate. They had won three out of ten matches played. They had lost seven matches and are laying at the second position from the bottom of the points table. They were beaten by RCB in the most recent match. On the other side, DC had a good start to IPL 2022 but lost momentum soon. They had also played a total of ten matches with five wins and the same losses. They are holding the fifth position on the points table. They are coming to this match on the back of a massive win over SRH. Many IPL prediction sites are saying that DC is going to win this match but we think that CSK will give a tough time to Delhi in this match.

Dr. DY Patil Stadium had proved lucky for CSK as they had won two out of three matches played on this venue. The bowling department of CSK had disappointed its fans in almost all previously played matches. Deepak Chahar is not available for this match and we think that they will pick Simranjeet Singh or Mukesh Chaudhary as his replacement. With these, both bowlers, M Theekshana, Ravindra Jadeja, Moeen Ali, and Pretorius are leading the bowling department of Chennai. M Theekshana was the most successful bowler in the previous match against RCB with three wickets to his name in four overs against 27 runs. Moeen Ali also performed well and picked two wickets while Pretorius had one wicket to his name. Ravindra Jadeja, Simarjeet Singh, and Mukesh Choudhary were the bowlers who could not pick any wicket. Ravindra Jadeja is an experienced all-rounder in the history of IPL but we don’t think that he had proved good in IPL 2022. M Theekshana and Moeen Ali have a big responsibility for handling the bowling department for CSK in the remaining matches.

CSK had won all matches due to the best and outstanding performance by their batting order. Moeen Ali and Devon Conway had led the batting in almost all previously played matches. This match will not be easy for the batters of Chennai as DC has a strong bowling department. Devon Conway had scored two consecutive fifties in the previous matches and he is looking in good form. We are sure that he will be a game-changer in this match. Amabati Rayadu, Ravindra Jadeja, and Robin Uthappa are handling the middle batting order of CSK with Ambati Rayudu, Ruturaj Gaikwad, and MS Dhoni. Devon Conway was the highest run-scorer in the previous match with 56 runs to his name on 37 balls with the help of six boundaries and two huge sixes. Moeen Ali also performed well with the bat and scored 34 runs while Ruturaj Gaikwad had 28 runs to his name. The batting order of Chennai is strong and they are doing well if the bowlers of Chennai give the best performance, we are sure that Chennai will surely win the remaining matches.

DC faced some issues with the batting order in the previous match against SRH and we think that these will remain in this match. Axar Patel and Prithvi Shaw are not available for this match and this can be a big blow for Delhi. Mandeep Singh is the other batter who is struggling with his form these days. Delhi had also some positive things as they have a strong middle batting order which is performing well since some last matches. Without their opening partnership, they scored more than 200 runs in the previous match against Hyderabad. David Warner, Mitchell Marsh, Rovman Powell, and Rishabh Pant are performing well in the middle and lower batting order of Delhi. David Warner was the most successful and highest run-scorer in the previous match with 92 runs to his name on just 58 balls with the help of 12 boundaries and three huge sixes. He remained not out till the 20th over. Rovman Powell was the other batter who was just good with the bat in the previous match.

Rovman Powell also remained not out after scoring 67 runs at the strike rate of 191. He smashed three boundaries and six huge sixes during his inning. He had a partnership of 127 runs with David Warner. Mitchell Marsh is not giving the best performance but we all know that he is the kind of player who can come back into the game at any time. Ripal Patel and Lalit Yadav are also struggling in IPL 2022. The bowling department of Delhi had not been impressive till now. Shardul Thakur, Khaleel Ahmed, Anrich Nortje, Mitchell Marsh, and Kuldeep Yadav are the key handlers of the bowling department of Delhi. Khaleel Ahmed was the highest wicket-taker in the previous match with three wickets to his name in four overs against 30 runs. Shardul Thakur also picked a wicket but he leaked a lot of runs. He picked two wickets while he was charged for 44 runs in four overs. Kuldeep Yadav, Anrich Nortje, and Mitchell Marsh picked one wicket each. Mitchell Marsh had been impressive in the previous matches and the pitch at the DY Patil Stadium will also support him but we think that the remaining bowlers of DC will struggle in this venue.

Chennai had played 26 matches against Delhi where they had won 16 matches while DC had won 10 matches in the history of IPL against CSK.

Chennai Super Kings had won two out of the most recent five matches they had played while Delhi Capitals had won three matches out of five recently played matches.

Chennai Super Kings is overall a strong team when we compare with Delhi Capitals. They have the best players in the t20 format of cricket. The batting order of this team is also strong and some well-known hitters of the t20 format are part of the squad of this team, so the winning chances of today’s match for Chennai Super Kings have been increased. The equation of who will win today’s cricket match prediction and who will win the cricket match today is mentioned as under.

The 55th match of IPL T20, 2022 is going to be held at the Dr. DY Patil Sports Academy, Mumbai. We had observed in the previous matches played here that the pitch here at this venue is good for batting in early overs. The track has a good amount of pace and bounce which allows the batsmen to the good cricketing shorts but this ground also has big boundaries which can be a plus point for the bowlers. A score of 190 plus seems to be a par score.

David Warner, R Gaikwad, and Devon Conway are the key players to watch in this match.

Dream11 fantasy team lineup prediction for Chennai Super Kings vs Delhi Capitals 55th Match IPL 2022. After checking the latest player’s availability, which players will be part of both teams, the possible tactics that the two teams might use as we had learned from previous seasons of the Indian Premier League to make the best possible Dream11 team.