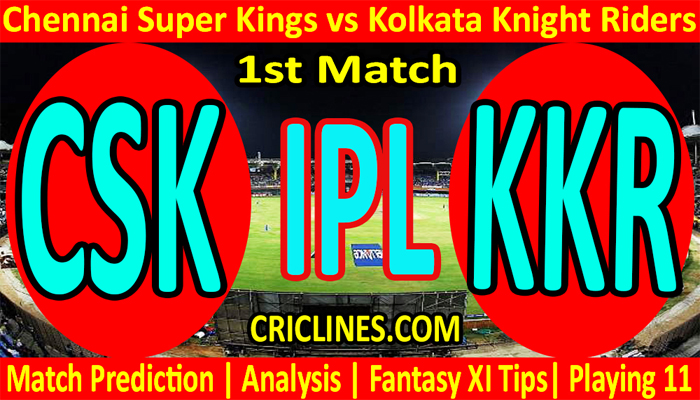 The cricket fans are ready to witness yet another big battle of the IPL T20. The 1st match of the Indian Premier League is scheduled to play between Chennai Super Kings and Kolkata Knight Riders on Saturday, 26th March 2022 at Wankhede Stadium, Mumbai. We are posting safe, accurate, and 100% secure today match prediction for all matches of IPL T20 free.

The biggest and most loved cricket league in the world, the Indian Premier League which is also known as IPL T20 is going to start. This time, IPL is bigger than ever as two new teams had joined and a total of 74 matches will be played instead of 64 matches between ten teams. The opening match of IPL 2022 is scheduled between the finalist of the previous edition, Chennai Super Kings and Kolkata Knight Riders.

Chennai Super Kings won the title of the previous edition of IPL and will be defending it. CSK had trusted on the most experienced players than the young players and we will also see this in this tournament. The most successful captain of Chennai Super Kings, MS Dhoni had resigned and Ravindra Jadeja will be leading the Kings. Deepak Chahar will not available for the first half of IPL and this is not a good sign for CSK. Moeen Ali had got the visa and we can expect that he will be part of the playing eleven for this match. Devon Conway will debut in the Indian Premier League in this match and he will be opening the batting inning of CSK with Ruturaj Gaikwad.

The batting order of Chennai Super Kings is average but experienced. Ambati Rayadu, Ravindra Jadeja, Dwayne Bravo, Robin Uthappa, and MS Dhoni will be handling the batting order of CSK and we are sure that the above mentioned players will be the part of playing eleven for this match. Ravindra Jadeja and Ambati Rayadu can be the highest run-scorer in this match. The bowling department of CSK is also average. Chris Jordan and Adam Milne are available and we think that one of these players will be selected for this match. Theekshana, KM Asif, Tushar Deshpande, and Rajvardhan Hangargekar are also available for selection.

Kolkata Knight Riders were the runner-up team of this previous season. The performance of KKR was average in the previous edition at the league stage where they won seven and lost the same matches but they beat Royal Challengers Bangalore in the Eliminator and Delhi Capitals in the qualifier two matches. They had retained Sunil Narine, Varun Chakravarthy, Venkatesh Iyer, and Andre Russel from the auction. Shreyas Iyer is a new addition to this team who is in superb form these days as we had seen him against the series against West Indies. Venkatesh Iyer will open the batting inning for KKR but we are not sure who will be his second partner.

Nitish Rana, Ajinkya Rahane, and Aaron Finch are available and one of these three batters will open the batting inning with Venkatesh Iyer. Sam Billings will also the part of the final playing eleven for this match as he is the only full-time wicket-keeper in the squad of KKR. Shivam Mavi and Umesh Yadav are the leading bowlers of KKR with Andre Russell and Sunil Narine. The batting order of KKR is good and strong but there are some gaps in the bowling department which will be filled with some local bowlers.

Chennai Super Kings is overall a strong team than Kolkata Knight Riders. They have the best players of the t20 format. The batting order of this team is also strong and some well-known hitters of the t20 format are part of the squad of this team, so the winning chances of today’s match for Chennai Super Kings have been increased. The equation of who will win today’s cricket match prediction and who will win the cricket match today is mentioned as under.

The 1st match of IPL T20, 2022 is going to be held at the Wankhede Stadium, Mumbai. We had observed in the previous matches played here that the pitch here at this venue is good for batting in early overs. We had seen a total score of near about 220 runs in the most recent three matches played here. The track has a good amount of pace and bounce which allows the batsmen for the good cricketing shorts but this ground also has big boundaries which can be a plus point for the bowlers. A score of 180 plus seems to be a par score.

The weather forecast of Mumbai is almost good for this cricket match. There are almost no chances of rain in the region and we are hopeful that we will have a full match to enjoy.

Shreyas Iyer, Venkatesh Iyer, and Andre Russell are the key players to watch in this match.

Dream11 fantasy team lineup prediction for Chennai Super Kings vs Kolkata Knight Riders 1st Match IPL 2022. After checking the latest player’s availability, which players will be part of both teams, the possible tactics that the two teams might use as we had learned from previous seasons of the Indian Premier League to make the best possible Dream11 team.

We had provided you with the above-mentioned IPL prediction on the basis of our research, understanding, and analysis. These prediction tips have also been based on the reports that we have from our different sources. You can consider the point we had provided you and in the end, the 1st Match decision will be yours.