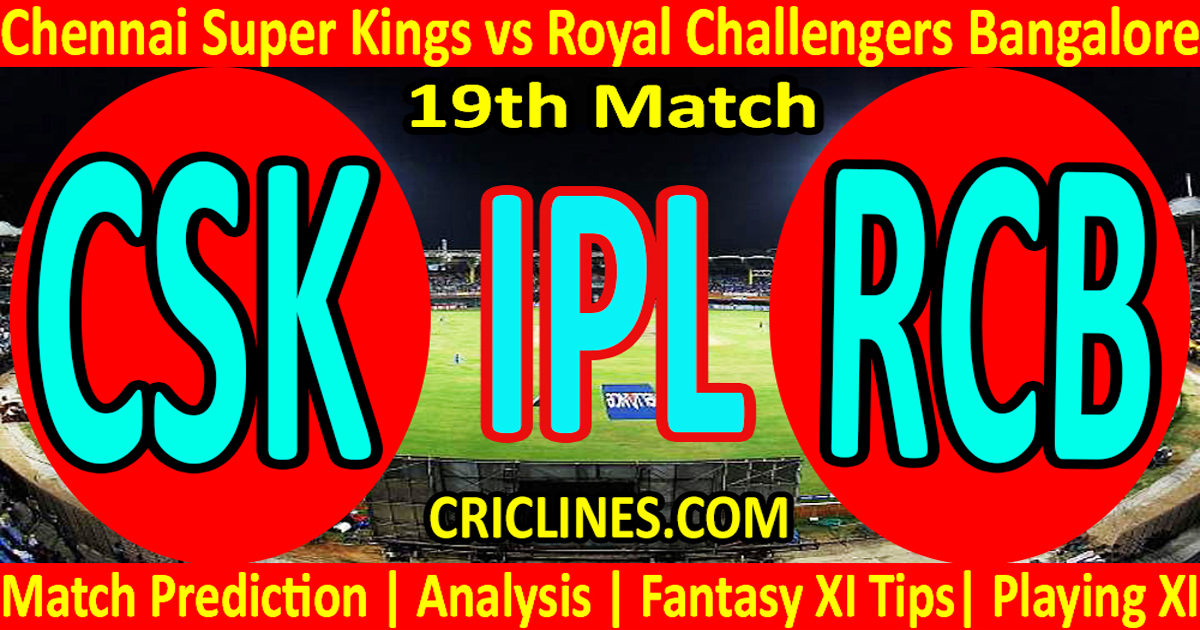 The cricket fans are ready to witness yet another big battle of the IPL T20. The 19th Match of the Indian Premier League is scheduled to play between Chennai Super Kings and Royal Challengers Bangalore on Sunday, 25th April 2021 at Wankhede Stadium, Mumbai. We are posting safe, accurate, and 100% secure today match prediction for all matches of IPL T20 free.

Chennai Super Kings is on winning track after losing the first match of this season of IPL against Delhi Capitals. They had beaten Punjab Kings, Rajasthan Royals, and Kolkata Knight Riders and now are going to face the un-beaten team of this tournament, Royal Challengers Bangalore. This is the most awaited match of this edition of IPL. Chennai Super Kings had been outstanding in almost all matches they had played so far. The batting order of this team is in good form and we observed this in their most recent match against KKR when they scored a total of 220 runs. Faf du Plessis had been consistent in run-scoring in almost all matches. He scored 95 runs at the strike rate of 158 runs. Ruturaj Gaikwad also had put some runs on in the previous match while Moeen Ali also had been outstanding with the bat. We also saw some good shorts by the skipper, MS Dhoni in the most recent match.

The bowling department of Chennai Super Kings had also been good in almost all matches they had played. Deepak Chahar is leading the batting order of CSK and had picked wickets in all previously played matches. The addition of Lungi Ngidi in the final playing eleven also had proved good for Chennai Super Kings. Ravindra Jadeja is the other bowler who had picked wickets and also he is the most economical bowler. He also had been good in fielding and had picked some outstanding catches. The performance of Sam Curran is also good but he was the most expensive bowler from their side in the previous match where he leaked 58 runs in four overs including 30 runs in just one over. Shardul Thakur also needs to bowl in the right areas against the strong batting order of other teams.

Royal Challengers Bangalore had made history after winning their first four matches in a row as this had not happened before in IPL. The batting order of Royal Challengers Bangalore had been shining in this edition of IPL so far. Glenn Maxwell and AB de Villiers were leading the batting order of this team in the last three matches. This pair is known as one of the dangerous pair among all other teams but in the most recent match against Rajasthan Royals, The opening batsmen of RCB, Virat Kohli, and Devdutt Padikkal took the charge and chased the target of 178 runs in 16.3 overs without losing any wicket. Devdutt Padikkal scored his maiden century in the previous match. He scored a total of 101 runs at the strike rate of near 200 with the help of 11 boundaries and six huge sixes. The skipper, Virat Kohli scored the first fifty of this season of IPL and scored a total of 72 runs on 47 deliveries with the help of six boundaries and three sixes.

The skipper, Virat Kohli completed his 6000 runs in the IPL and now, he is the only batsman who had scored such many runs in the number t20 league of the world. We also had seen some best performances by the bowling department of RCB. Mohammad Siraj had been good with the ball in this tournament so far. They had picked wickets in almost all matches and also had been the most economical bowler. Harshal Patel had been consistent in wicket-taking and he also had been an economical bowler in almost all previously played matches. Kane Richardson and Kayle Jamieson are the extra strength of the bowling unit of RCB and had played a key role in each and every win for the team. It will be interesting to see two teams who are in good form and had won most of their matches played so far.

Chennai Super Kings had won three out of five most recent matches played while Royal Challengers Bangalore also had won four one out of five recently played matches.

Royal Challengers Bangalore is overall a strong team than Chennai Super Kings. They have the best players in the t20 format. The batting order of this team is also strong and some well-known hitter of t20 format is part of the squad of this team, so the winning chances of today’s match for Royal Challengers Bangalore have been increased. The equation of who will win today cricket match prediction and who will win the cricket match today is mentioned as under.

The 19th Match of IPL T20, 2021 is going to be held at the Wankhede Stadium, Mumbai. We had observed in the previous matches played here that the pitch here at this venue is good for batting in early overs. The track is slower than the others we have seen and helps the spinners quite a bit. We are hoping that the surface is bound to get slower and be a bit more difficult for batting in the last overs this match. A score of 200 plus seems to be a par score.

Dream11 fantasy team lineup prediction for Chennai Super Kings vs Royal Challengers Bangalore 19th Match IPL 2021. After checking the latest player’s availability, which players will be part of both teams, the possible tactics that the two teams might use as we had learned from previous seasons of the Indian Premier League to make the best possible Dream11 team.