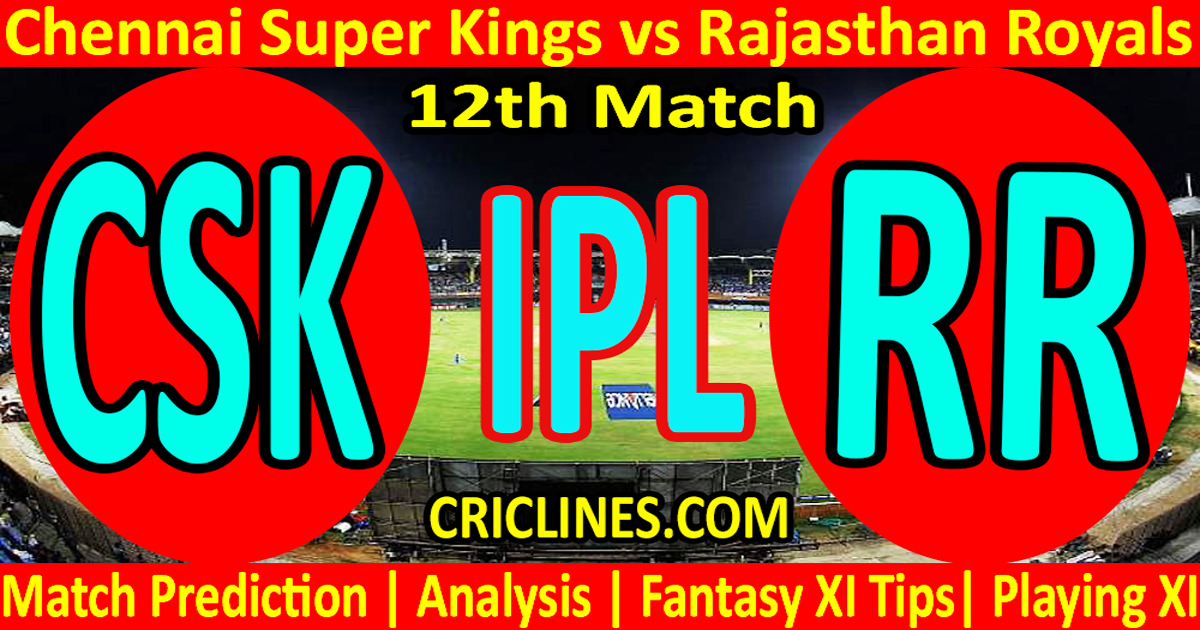 The world is ready to witness yet another big battle of the IPL T20. The 12th Match of the Indian Premier League is scheduled to play between Chennai Super Kings and Rajasthan Royals on Monday, 19th April 2021 at Wankhede Stadium, Mumbai. We are posting safe, accurate, and 100% secure today match prediction for all matches of IPL T20 free.

Chennai Super Kings showed in the previous match that they are not the team which was in the previous edition of IPL by giving a fantastic performance. The bowling department of CSK destroyed the batting order of Punjab Kings and stop them to the lowest score of this season of IPL T20. Deepak Chahar was outstanding with the new ball and picked wickets in the powerplay. The batting department of almost all teams is strong and losing early wickets in power play can set them back. We are expecting the same good performance by Deepak Chahar in this match against Rajasthan Royals. Sam Curran also performed well while he was getting support from the other end by Deepak Chahar. Dwayne Bravo, Ravindra Jadeja, and Moeen Ali were also good with the ball in the previous match but Shardul Thakur was poor. We think he needs to improve the skills and have to get adjusted to the conditions.

The batting order of Chennai Super Kings is still in process of setting up with the condition. Suresh Raina, Faf du Plessis, and Moeen Ali scored some runs but we think that they still need improvements. Moeen Ali proved the highest run-scorer in the previous match against Punjab Kings. He scored 46 runs with a strike rate of 148. Faf du Plessis was the other batsman who put some runs on the board. He remained not out after scoring 36 runs with the help of three boundaries and one six. Suresh Raina performed well in the first match but failed to put some big runs on the board in the previous match. He could manage to score just eight runs. Ruturaj Gaikwad also failed to score some runs. He had just five runs to his name. Ambati Rayudu failed to open his account on the scoreboard and was bowled out on a golden duck. We think that he will open the batting with Faf du Plessis in this match.

Rajasthan Royals have to some luck in the previous match against Delhi Capitals but we don’t think that this will repeat in the next matches. The batting order of Rajasthan Royals is a little bit weak when we compare it with other teams. Jos Buttler is also not scoring runs while Manan Vohra is also not performing as many of us were hoping. The batting performance of Riyan Parag and Shivam Dube is also not good. The responsibility of runs scoring is on David Miller, Sanju Samson, and Chris Morris. David Miller was the most successful batsman in the previous match against Delhi Capitals and scored 62 runs on 43 balls at the strike rate of 144 runs. He smashed seven boundaries and two sixes. Chris Morris played a key role in the first win of Rajasthan Royals. He scored 36 runs on just 18 balls at the right time. He smashed four sixes which was the key reason why they won the match.

We mentioned earlier that Rajasthan Royals will miss Jofra Archer and Ben Stokes and this is happening now. In the absence of these key bowlers, Chetan Sakariya, Chris Morris, Rahul Tewatia, Jaydev Unadkat, and Mustafizur Rahman are trying to handle the bowling department. These bowlers had leaked plenty of runs in both previous matches played. Unadkat proved the most successful bowler in the previous match. He picked three wickets in four overs against just 15 runs. Mustafizur picked two wickets but he leaked plenty of runs. He was charged for 29 runs in four overs. Chris Morris had one wicket to his name while Chetan Sakariya, Riyan Parag, and Rahul Tewatia were the bowlers who failed to pick any wicket.

Chennai Super Kings is overall a strong team than Rajasthan Royals. They have the best players in the t20 format. The batting order of this team is also strong and some well-known hitter of t20 format is part of the squad of this team, so the winning chances of today match for Chennai Super Kings have been increased. The equation of who will win today cricket match prediction and who will win the cricket match today is mentioned as under.

The 12th Match of IPL T20, 2021 is going to be held at the Wankhede Stadium, Mumbai. We had observed in the previous matches played here that the pitch here at this venue is good for batting in early overs. The track is slower than the others we have seen and helps the spinners quite a bit. We are hoping that the surface is bound to get slower and be a bit more difficult for batting in the last overs this match. A score of 185 seems to be a par score.

Dream11 fantasy team lineup prediction for Chennai Super Kings vs Rajasthan Royals 12th Match IPL 2021. After checking the latest player’s availability, which players will be part of both teams, the possible tactics that the two teams might use as we had learned from previous seasons of the Indian Premier League to make the best possible Dream11 team.