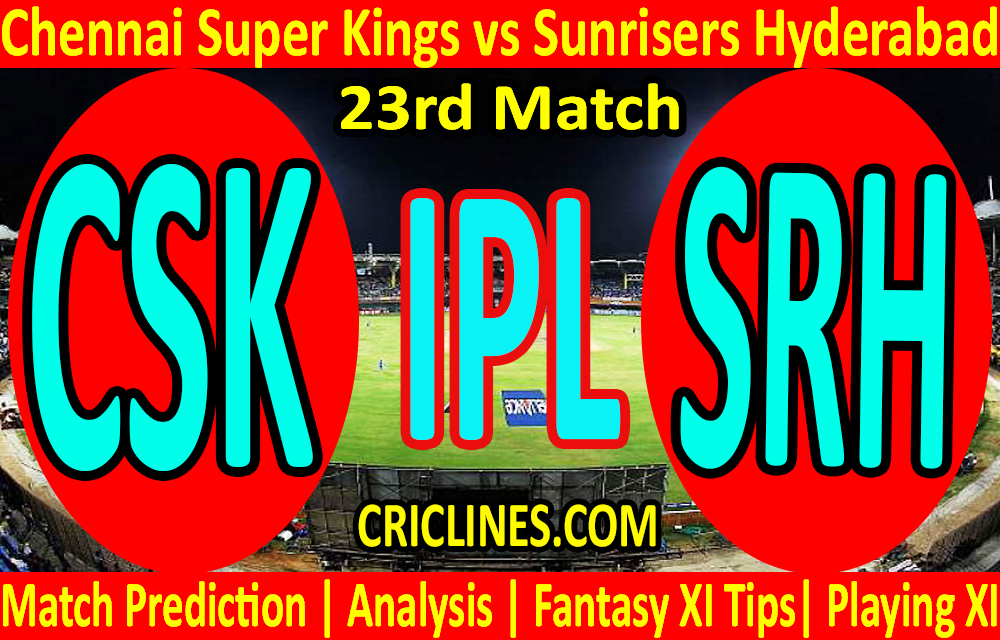 The cricket fans are ready to witness yet another big battle of the IPL T20. The 23rd Match of the Indian Premier League is scheduled to play between Chennai Super Kings and Sunrisers Hyderabad on Wednesday, 28th April 2021 at Arun Jaitley Stadium, Delhi. We are posting safe, accurate, and 100% secure today match prediction for all matches of IPL T20 free.

Chennai Super Kings is on winning track after losing their very first match of this season of the IPL T20. They had played a total of five matches with four wins to their name. They had lost just one match and are leading the points table of this tournament right now. They had beaten the strong team of this tournament, Royal Challengers Bangalore with a handsome margin of 69 runs. Chennai Super Kings had finally got the best combination and now they are good in batting and also in bowling. The batting order of this team had been consistent in run-scoring in almost all matches. Faf du Plessis had scored runs in almost all matches that he had played and had given the best start to his team. Ruturaj Gaikwad also had scored runs in a couple of matches. Suresh Raina started his campaign in this tournament is an excellent way but had failed to score some big runs in upcoming matches. The form of Ambati Rayudu also has a big question and we think that he should be given rest in some next matches.

Ravindra Jadeja was the hero of the previous match against Royal Challengers Bangalore. He had an outstanding performance in batting and also in bowling. He smashed 62 runs with a strike rate of 221 and remained not out and also picked three wickets while bowling. The bowling department of Chennai Super Kings is also in good form and performing well. Imran Tahir was given the first chance in the final playing eleven in the previous match where he performed well. Not only he picked wickets, but he was also good in the fielding and also, he was an economical bowler. He picked two wickets in his four overs against just 16 runs and also had a run-out to his name. Deepak Chahar had performed well throughout this tournament so far and had picked early wickets in almost each and every match. Sam Curran and Shardul Thakur are the other bowlers who had been good in the previously played matches. The form of Dwayne Bravo had not been good and we think that he should be skipped from this match.

Sunrisers Hyderabad is the team that is struggling in this edition of the Indian Premier League in almost each and every match they had played. They had won just one out of four matches played so far and are laying at the bottom of the points table. They were near to win the previous match against Delhi Capitals but lost in the super over. The top batting order of this had been good so far. Kane Williamson, Jonny Bairstow, and the skipper, David Warner had performed well in almost all previously played matches but the form of the middle batting order has a big question mark on it. Virat Singh, Kedar Jadhav, and Abhishek Sharma had almost failed to out some runs on the board and we think these players should be replaced with the players who are sitting on the benches. The management of this team needs to make some big decisions and should bring the batsmen who should score some big runs in the middle overs.

We think that the bowling department of Sunrisers Hyderabad also needs up-gradation. Rashid Khan is the only bowler who had performed well in this tournament so far from the Hyderabad side. He had been the most economical bowler and also had taken key wickets in almost each and every match. The form of Khaleel Ahmed had not been good in this tournament so far. He was the most economical bowler in the most recent match against Delhi Capitals where he leaked 42 runs in his four overs and also remained wicketless. Vijay Shankar is the other bowler who had been struggling so far. We think that the batting order of Sunrisers Hyderabad is doing the job but their bowling unit is not performing well. It is near the half of this tournament and Sunrisers Hyderabad needs to come back strongly. Otherwise, they are going to face a lot of problems in upcoming matches.

Chennai Super Kings had won four out of five most recent matches played while Sunrisers Hyderabad had won just one out of five recently played matches.

Chennai Super Kings is overall a strong team than SRH. They have the best players in the t20 format. The batting order of this team is also strong and some well-known hitter of the t20 format is part of the squad of this team, so the winning chances of today match for Chennai Super Kings have been increased. The equation of who will win today cricket match prediction and who will win the cricket match today is mentioned as under.

The 23rd Match of IPL T20, 2021 is going to be held at the Arun Jaitley Stadium, Delhi. We had observed in the previous matches played here that the pitch here at this venue is good for batting in early overs. The track has a good amount of pace and bounce which allows the batsmen for the good cricketing shorts but this ground also has big boundaries which can be a plus point for the bowlers. A score of 190 plus seems to be a par score.

Dream11 fantasy team lineup prediction for Chennai Super Kings vs Sunrisers Hyderabad 23rd Match IPL 2021. After checking the latest players’ availability, which players will be part of both teams, the possible tactics that the two teams might use as we had learned from previous seasons of the Indian Premier League to make the best possible Dream11 team.