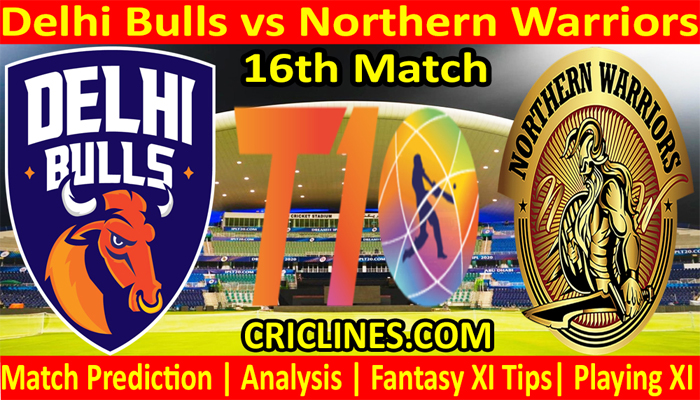 The world is ready to witness yet another big battle of the Abu Dhabi T10 League. The 16th match of the T10 League is scheduled to play between Delhi Bulls and Northern Warriors on Thursday, 25th November 2021 at Sheikh Zayed Stadium, Abu Dhabi. We are posting a safe, accurate, and secure today match prediction of Abu Dhabi T10 League free.

The performance of the Delhi Bulls had been average in this tournament till now. They had played a total of five matches with three wins to their name. They had lost two matches and are holding the 3rd position on the points table of Abu Dhabi T10 League season five.

Northern Warriors had finally a win to their name after losing four matches in a row. Now they had played five matches with just one win to their name. They had lost four matches and are laying at the second last position on the table. They can move to the next level of this tournament but for that, they have to win their all remaining matches.

Delhi Bulls had lost their most recent match against Team Abu Dhabi by the margin of six wickets. That was a match which they could easily win but they failed to defend 18 runs in the last over. They lost the toss and were asked to bat first. The performance of their batting order was good. They scored 121 runs in their 10 overs inning. Romario Shepherd was the most successful and highest run-scorer from their side who scored 39 runs on just 11 deliveries with the help of three boundaries and four huge sixes.

Luke Wright scored 25 runs while Rahmanullah Gurbaz had 22 runs to his name. Delhi Bulls lost the previous match due to the worst performance by their bowling unit. They failed to defend the target of 122 runs and leaked this target on the last ball of their 10th over. Dominic Drakes was the only successful bowler from their side who picked two wickets in his two overs bowled out against 12 runs. Fazalhaq Farooqi picked one wicket while Shiraz Ahmed, Ravi Rampaul, Romario Shepherd, and the skipper, Dwayne Bravo were the bowlers who failed to pick any wicket.

Northern Warriors had won their most recent match against The Chennai Braves with a margin of 19 runs. They lost the toss and were put in to bat first. The performance of their batting order was just outstanding. They scored a total of 152 runs in their 10 overs inning. Kennar Lewis and Moeen Ali were the most successful batsmen from their side and both batters scored 49 runs each. The skipper, Rovman Powell also performed well with the bat and scored 28 runs on just 12 balls.

The way how the bowling unit of Northern Warriors performed in the previous match was just outstanding. They defended the target of 153 runs and leaked 133 runs. They send all teams of The Chennai Braves back to the pavilion in 19.5 overs. Oshane Thomas was the most successful and highest wicket-taker from their side who picked three wickets in his two overs bowled out against 21 runs. He become the 4th bowler who had a hat-trick in the history of the Abu Dhabi T10 League. Joshua Little and Umair Ali picked two wickets each while Imran Tahir, Abhimanyu Mithun, and Rayad Emrit picked one wicket each in the previous match.

The 16th match of the T10 League is going to be played at Sheikh Zayed Stadium, Abu Dhabi. This venue has one of the flattest and completely dead tracks we have seen in the past. We are expecting a slow, flat, and good batting surface for this match. A score of more than 120 runs should be a par score.

Romario Shepherd, Dominic Drakes, and Moeen Ali to watch in this match.

The dream11 team prediction for Delhi Bulls vs Northern Warriors 16th match T10 League. After checking the latest player’s availability, which players will be part of both teams, he possible tactics that the two teams might use as we had learned from previous seasons of T10 League to make the best possible Dream11 team.