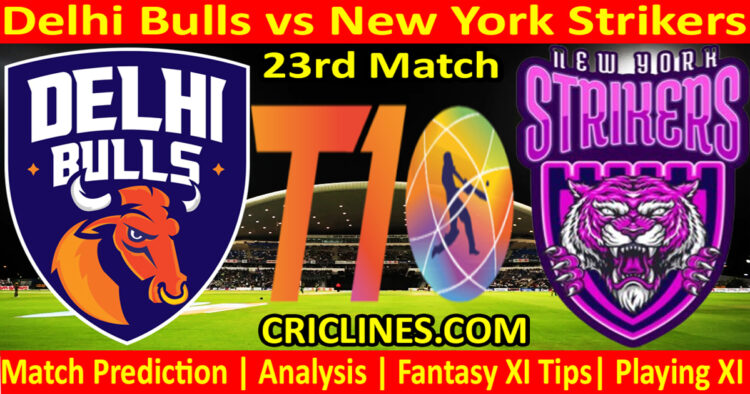 Delhi Bulls are the worst-performing team in this edition of the Abu Dhabi T10 League. They had played a total of five matches with just one win to their name. They had lost three matches while their one match was tied. They are currently laying at the bottom of the points table.

New York Strikers are playing their first-ever season of the Abu Dhabi T10 League and they had been just outstanding in this tournament. They are the second-best-performing team in this tournament right now. They had won three out of four matches played so far. They had lost just one match and are holding the second position on the ladder.

Delhi Bulls lost their most recent match against Bangla Tigers by a margin of 12 runs. They lost the toss and decided to field first but their bowling unit failed to give the best performance and leaked 133 runs in 10 overs. The skipper, DJ Bravo was the only successful bowler from their side who picked one wicket in two overs against 25 runs. Keemo Paul also had a wicket to his name but he leaked a lot of runs. He picked one wicket while he was charged with 16 runs in one over. No other bowler from their side could manage to pick any wicket.

Imad Wasim, Harbhajan Singh, Richard Gleeson, and Shiraz Ahmed were the bowlers who remained wicketless in the previous match. The batting order of Delhi Bulls performed well but failed to chase the target of 134 runs and scored 121 runs in 10 overs. Tim David had been outstanding in this tournament and he also performed well in the previous match. He proved the most successful and highest run-scorer from their side who scored 50 runs and remained not out. He faced 20 balls and smashed one boundary and six huge sixes. Jordan Cox also performed well and scored 34 runs on 21 balls with the help of two boundaries and the same huge sixes. Rilee Rossouw scored 15 runs while Keemo Paul remained not out after scoring 10 runs.

New York Strikers had beaten the strong team of this tournament, Morrisville Samp Army in their previous match with a margin of 12 runs. They lost the toss and were asked to bat first. The performance of their batting order was not much impressive. They could manage to score just 110 runs in 10 overs. Just two batters from their side could manage to enter into double figures. Azam Khan was the most successful and highest run-scorer from their side scoring 47 runs on just 21 balls with the help of three boundaries and five huge sixes. Paul Stirling also performed well and scored 34 runs. He faced just 13 balls and smashed five boundaries and two huge sixes.

No other batter from their side could enter into the double figure. Andre Fletcher scored just 8 runs while Eoin Morgan had seven runs to his name. New York Strikers won the most recent match due to the best performance by their bowling unit. They defended the target of 111 runs and leaked 98 runs in 10 overs. They used a total of eight bowlers and Ravi Rampaul proved the most successful and highest wicket-taker from their side with two wickets to his name in two overs against 25 runs. The skipper, Kieron Pollard also performed well and picked one wicket in one over against just six runs. Jordan Thompson and Paul Stirling also picked one wicket each while Akeal Hosein, Matiullah Khan, Wahab Riaz, and Muhammad Waseem were the bowlers who failed to pick any wicket in the previous match.

The 23rd Match of the T10 League is going to be played at Sheikh Zayed Stadium, Abu Dhabi. This venue has one of the flattest and completely dead tracks we have seen in the past. We are expecting a slow, flat, and good batting surface for this match. A score of more than 120 runs should be a par score.

Kieron Pollard, Azam Khan, and Tim David are key players to watch in this match.

The dream11 team prediction for Delhi Bulls vs New York Strikers 23rd Match T10 League. After checking the latest player’s availability, which players will be part of both teams, and the possible tactics that the two teams might use as we had learned from previous seasons of Abu Dhabi T10 League to make the best possible Dream11 team.