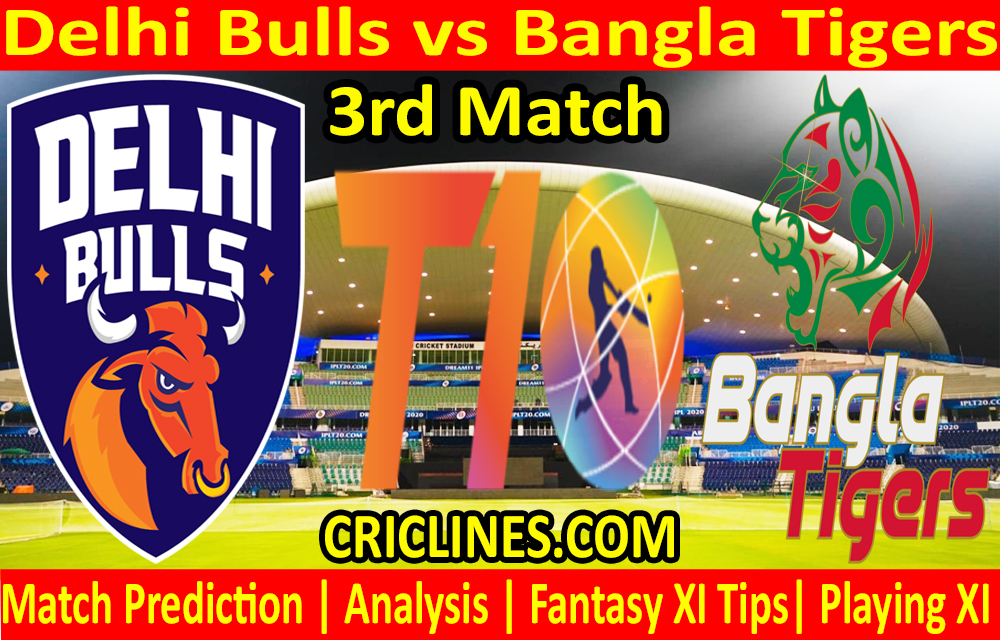 The cricket fans are ready to witness yet another big battle of the T10 League. The 3rd Match match of the T10 League is scheduled to play between Delhi Bulls and Bangla Tigers on Thursday, 28th January 2021 at Sheikh Zayed Stadium, Abu Dhabi. We are posting safe, accurate, and secure today match prediction for all matches of Abu Dhabi T10 League free.

Delhi Bulls failed to give their best performance in the previous season of the T10 League but they had some big names of the shorter format of cricket in their squad for this edition. The batting order of this team is strong at least on papers. Adam Lyth and Evin Lewis are going to lead the batting order of this team. Rahmatullah Gurbaz is another big name of this team. Dasun Shanaka, Ravi Bopara, Tom Abell, Mohammad Nabi, and Sherfane Rutherford are the key players of the Bulls.

The performance of the Bangla Tigers was average in the previous edition of this tournament. They won three out of six matches played at the league stage. The management of this team had acquired the services of some match-winners for this season of the T10 League. Johnson Charles, David Wiese, and Andre Fletcher are the key batsmen of the squad of team. Atif Hossain, Tom Moores, Chirag Suri, Qais Ahmad, Mujeeb ur Rahman, Noor Ahmed, Mohammad Irfan, and Isuru Udana are the key players of this team.

Bangla Tigers failed to give their outstanding performance in the previous season of this tournament but they had acquired the services of the best players, so the winning chances of today match for Bangla Tigers have been increased. The equation of who will win today cricket match prediction and who will win the cricket match today is mentioned as under.

The 3rd Match match of the T10 League is going to be played at Sheikh Zayed Stadium, Abu Dhabi. This venue has one of the flattest and completely dead tracks we have seen in the past. We are expecting a slow, flat, and good batting surface for this match. According to the live cricket score, a total of more than 120 runs should be a par score.

The dream11 team prediction for Delhi Bulls vs Bangla Tigers 3rd Match match T10 League. After checking the latest player’s availability, which players will be part of both teams, the possible tactics that the two teams might use as we had learned from previous seasons of T10 League to make the best possible Dream11 team.