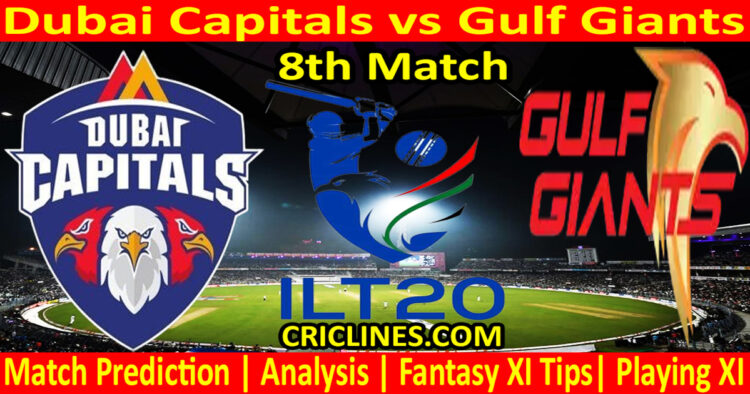 The world is ready to witness yet another big battle of IL 2023. The 8th match of the International League 2023 is scheduled to play between Dubai Capitals and Gulf Giants on Thursday, 19th January 2023 at Sharjah Cricket Stadium, Sharjah. We are posting safe, accurate, and 100% secure today match prediction of IL T20 2023 with live IL T20 scores and ball by ball updates with prediction.

Dubai Capitals were beaten by the same team, Gulf Giants in their most recent match by a margin of six wickets. They lost the toss and were asked to bat first. The way how their batting order performed in the previous match was just outstanding. They scored 182 runs in 20 overs. Robin Uthappa was the most successful and highest run-scorer from their side with 79 runs to his name. He faced 46 balls and smashed ten boundaries and two huge sixes. The skipper, Rovman Powell also performed well and scored 38 runs.

Sikandar Raza remained not out after scoring 30 runs while Hazrat Luqman scored 10 runs. Dubai Capitals lost the previous match due to the worst performance by their bowling unit. They failed to defend the target of 183 runs and leaked this target in 19 overs. Mujeeb Ur Rahman was the highest wicket-taker from their side with two wickets to his name in four overs against 36 runs. The skipper, Rovman Powell was the other bowler with a wicket to his name. He picked one wicket in two overs against 17 runs while no other bowler from their side could manage to pick any wicket.

Gulf Giants performed well in each and every department of the game in their very first match of this tournament. They have a strong bowling unit in their squad and leaked 182 runs in 20 overs. Rehan Ahmed was the most successful and highest wicket-taker from their side with two wickets in his account in four overs against 28 runs. Richard Gleeson was the other bowler who performed well with the balls and picked two wickets in four overs against just 22 runs. Sanchit Sharma and David Wiese picked one wicket each.

Chris Jordan and Liam Dawson were the bowlers who failed to pick any wicket. The way how the batting order of Gulf Giants performed in the previous match was just outstanding. They chased the target of 182 runs in 19 overs. The skipper, James Vince was the most successful and highest run-scorer from their side. He scored 83 runs on 56 balls with the help of seven boundaries and two huge sixes. He remained not out till the chase of the target. Gerhard Erasmus also had an outstanding performance with the bat. He scored 52 runs on just 28 balls and smashed five boundaries and two huge sixes. Rehan Ahmed scored 28 runs.

Gulf Giants is overall a strong team than Dubai Capitals. They have the best players in the t20 format of cricket. The batting order of this team is also strong and some well-known hitters of the t20 format are part of the squad of this team, so the winning chances of today’s match for Gulf Giants have been increased. The equation of who will win today’s cricket match prediction is mentioned as under.

The 8th match of IL T20, 2023 is going to be held at the Sharjah Cricket Stadium, Sharjah. We had observed in the most recent matches played here that the pitch here at this venue is good for batting especially in early overs. The track has a good amount of pace and bounce which allows the batsmen to the good cricketing shorts but this ground also have big boundaries which can be a plus point for the bowlers. The dew will play a major part in the second inning. A score of 180 plus seems to be a par score on this venue.

The weather forecast for Sharjah is good for this cricket match. There are almost no chances of rain in the region and the weather will be good at night as we know that the nights are cooler in UAE in the winter season.

James Vince, Rehan Ahmed, and Robin Uthappa are key players to watch in this match.

Dream11 fantasy team prediction for today’s match of Dubai Capitals vs Gulf Giants IL 2023. After checking the latest player’s availability and which players will be part of the playing eleven of both teams, the possible tactics that the two teams might use as we had learned from previous matches played here to make the best possible Dream11 team.

We had provided you with the above-mentioned IL T20 prediction on the basis of our research, understanding, and analysis. These prediction tips have also been based on the reports that we have from our different sources. You can consider the point we had provided you and the decision will be yours that you have to make at your own risk.