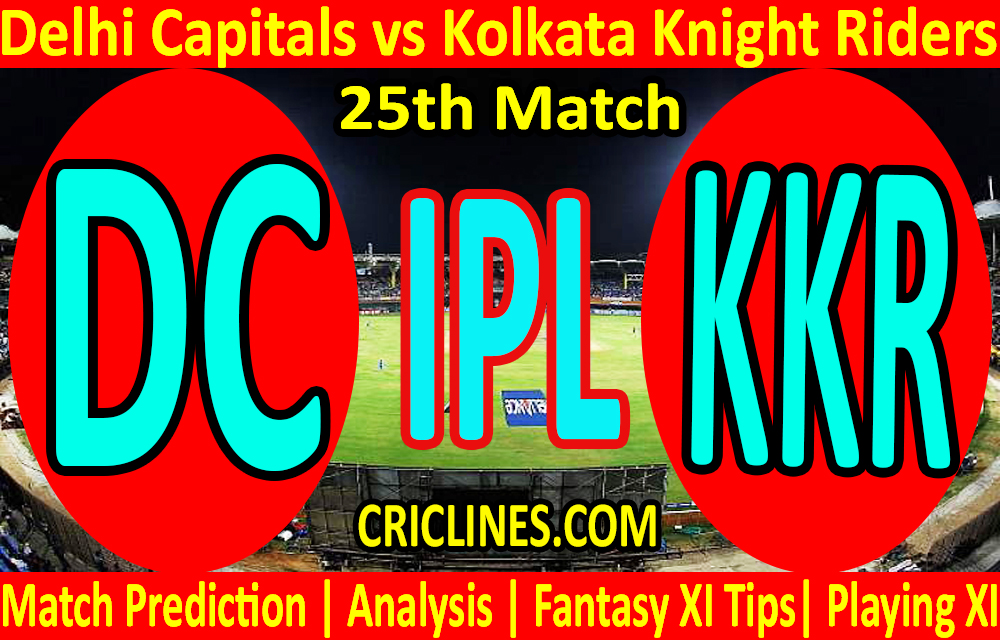 The cricket fans are ready to witness yet another big battle of the IPL T20. The 25th Match of the Indian Premier League is scheduled to play between Delhi Capitals and Kolkata Knight Riders on Thursday, 29th April 2021 at Narendra Modi Stadium, Ahmedabad. We are posting safe, accurate, and 100% secure today match prediction for all matches of IPL T20 free.

Delhi Capitals will be disappointed as they lost their previous match against Royal Challengers Bangalore by the margin of just one run. They had played a total of six matches with four wins to their name. They had lost two matches and are holding the 3rd position on the table right now. The team selection of the Delhi Capitals was perfect in the previous match but things did not work in their favor. They gave a chance to Ishant Sharma in the playing eleven in place of Lalit Yadav which was the right decision and now, they have a perfect bowling unit as Amit Mishra and Avesh Khan are in good form and are taking wickets in almost each and every match. Axar Patel is also back in the team while Kagiso Rabada also had been good in the previously played matches. We are unable to understand that why Marcus Stoinis was given the last over to bowl where he was charged for plenty of runs.

The top batting order of Delhi Capitals is strong and also in good form but we observed Rishab Pant struggling to hit the boundaries in the most recent match against RCB. He scored 58 runs on 48 deliveries but failed to hit the boundaries when they were needed. Prithvi Shaw and Shikhar Dhawan are in superb form these days and had scored runs in each match. The form of Steve Smith has a lot of questions to answer. He had played in almost all matches but had failed to put some big runs on the board. We think that there would be a lot of pressure on him to perform well in this match. We saw some hard-hitting from the bat of Shimron Hetmyer in the previous match. He scored 53 runs with a strike rate of 212 and smashed four sixes and two boundaries during his inning. He also remained not out till the end of the inning. We are hoping for the same form from Shimron Hetmyer. Delhi Capitals had got the good combination in the batting and also in the bowling and we don’t think that the loss in the previous match will affect their form in this match.

Kolkata Knight Riders won the previous match against Punjab Kings because of the outstanding performance by their bowling department. Now they had played six matches with two wins to their name. They had lost four matches and are holding the fifth position on the points table. The performance of the bowling department was just superb in the most recent match where they restricted the strong batting order of Punjab Kings on a total of just 123 runs on a pitch which was excellent for batting. Prasiddh Krishna and Sunil Narine had performed well in the previous matches and we are hoping that they will continue this good form in this match. Shivam Mavi is the other bowler who had picked wickets early and also had been the most economical bowler. He needs to continue this form in upcoming matches against the strong teams of this tournament.

Pat Cummins is the other bowler who had performed well in the previous matches while Andre Russell and Varun Chakravarthy are also good with the ball as we had observed in the most recent matches. The form of the batting order is a big issue for Kolkata Knight Riders so far. Shubman Gill and Nitish Rana are not in the good form and both batsmen had failed to put some big runs on the board. Sunil Narine also had struggled in the previous matches with the bat. The skipper, Eoin Morgan scored some runs in the previous match but he is the other batsman who had been struggling in this tournament. Rahul Tripathi was the other batsman who put some runs on the board in the previous match and he needs to continue this form. Pat Cummins, Dinesh Karthik, and Andre Russell had scored some runs in this tournament we are not satisfied with the form of the batting order of Kolkata Knight Riders overall. This team had won just two matches so far and needs to bounce back strongly in the next matches.

Delhi Capitals had won four out of five most recent matches played while Kolkata Knight Riders had also won two out of five recently played matches.

Delhi Capitals is overall a strong team than Kolkata Knight Riders. They have the best players in the t20 format. The batting order of this team is also strong and some well-known hitter of t20 format is the part of the squad of this team, so the winning chances of today match for Delhi Capitals have been increased. The equation of who will win today cricket match prediction and who will win the cricket match today is mentioned as under.

The 25th Match of IPL T20, 2021 is going to be held at the Narendra Modi Stadium, Ahmedabad. We had observed in the previous matches played here that the pitch here at this venue is good for batting in early overs. The track has a good amount of pace and bounce which allows the batsmen for the good cricketing shorts but this ground also has big boundaries which can be a plus point for the bowlers. A score of 190 plus seems to be a par score.

Dream11 fantasy team lineup prediction for Delhi Capitals vs Kolkata Knight Riders 25th Match IPL 2021. After checking the latest player’s availability, which players will be part of both teams, the possible tactics that the two teams might use as we had learned from previous seasons of the Indian Premier League to make the best possible Dream11 team.