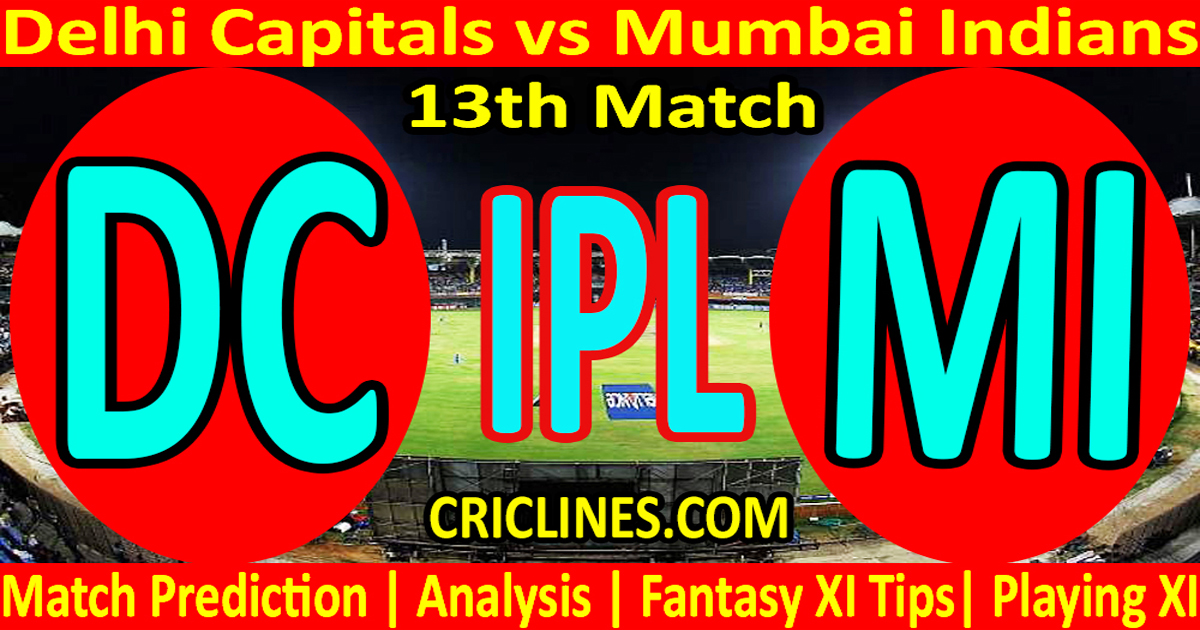 The cricket fans are ready to witness yet another big battle of the IPL T20. The 13th Match of the Indian Premier League is scheduled to play between Delhi Capitals and Mumbai Indians on Tuesday, 20th April 2021 at MA Chidambaram Stadium, Chennai. We are posting safe, accurate, and 100% secure today match prediction for all matches of IPL T20 free.

Delhi Capitals had won two out of three matches so far and the same Mumbai Indians had done. We had seen some interesting changes in their squad from the Delhi Capitals side which they had made in almost all matches played so far. Playing with just five batsmen on the pitches which are much favored for the batting is insane and as the result, Delhi Capitals had been struggling in run-scoring. Delhi Capitals had a plus point that their key batsman, Shikhar Dhawan is in excellent form. He scored 85 runs in the very first match and 92 runs in the previous match with a strike rate of 188 runs. Prithvi Shaw was also in good form in the Vijay Hazare trophy but had failed to score some big runs in the recent matches in IPL. Steve Smith is batting at number three but we had not seen any outstanding performance by Steve Smith.

Rishab Pant is the other batsman from the Delhi side who had been in good knock for a couple of months and also had performed well in the recent matches of the Indian Premier League. Stoinis had also shown some power hitting in the previous match. We think that Delhi Capitals need to make a couple of changes in their squad for this match. Sam Billings should in the final playing eleven in place of Chris Woakes. Ishant Sharma and Axar Patel are also available for selection. Two bowlers of Delhi Capitals had been outstanding so far in the previously played matches so far. Avesh Khan and Kagiso Rabada had done well with the ball but Lalit Yadav, Chris Woakes, and Lukman Meriwala are bowlers who had not disturbed the batting order of any team. The batting order of Delhi is giving the best and now, the bowling department of Delhi Capitals had to play a key role in each and every win for the team.

Mumbai Indians lost the first match of this season of the Indian Premier League but had won the next two matches due to the outstanding performance by their bowling department. Rahul Chahar is a bowler who had been just outstanding in the early and middle overs in each and every match they had played so far. Jasprit Bumrah also had performed well so far. Trent Boult was not good with the ball in the first match but he also had done well in the recent two matches. Mumbai Indians is a team that has the best bowling attack to bowl in the middle overs. Krunal Pandya had been outstanding in the middle overs with Adam Milne. Kieron Pollard and Hardik Pandya are the other bowlers who had done well in the middle overs in almost all matches that they had played. Due to the best bowling attack, Mumbai Indians had defended two low totals on the board in both previous matches.

The batting order of Mumbai Indians had not performed so far as many of us were expecting. The opening pair of this team had failed to give a good start and the middle order of this team also had failed. Rohit Sharma had spent some time on the pitch in the previous matches but had failed to convert it into a big total. We had seen Suryajumar Yadav struggling in almost all matches. Quinton de Kock scored some runs in the previous match and also needs to score runs consistently. Kieron Pollard was the other batsman who showed some power hitting in the most recent match and we are hopeful that he will continue his good form in upcoming matches. Hardik Pandya and Ishan Kishan are the other batsmen who are available to show some big sixes.

Mumbai Indians is a strong and better-balanced team and has a strong batting and bowling department. The batting and bowling squad of this team is much stronger at least on papers. According to our match prediction, Mumbai Indians is the favorite team who will win this match. There are many factors that make Delhi Capitals a favorite team to win this match. Some of the key factors are mentioned as under:

Mumbai Indians is overall a strong team than Delhi Capitals. They have the best players in the t20 format. The batting order of this team is also strong and some well-known hitter of t20 format is part of the squad of this team, so the winning chances of today match for Mumbai Indians have been increased. The equation of who will win today cricket match prediction and who will win the cricket match today is mentioned as under.

The 13th Match of IPL T20, 2021 is going to be held at the MA Chidambaram Stadium, Chennai. We had observed in the previous matches played here that the pitch here at this venue is good for batting in early overs. The track is slower than the others we have seen and helps the spinners quite a bit. We are hoping that the surface is bound to get slower and be a bit more difficult for batting in the last overs this match. A score of 185 seems to be a par score.

Dream11 fantasy team lineup prediction for Delhi Capitals vs Mumbai Indians 13th Match of IPL 2021. After checking the latest player’s availability, which players will be part of both teams, the possible tactics that the two teams might use as we had learned from previous seasons of Indian Premier League to make the best possible Dream11 team,