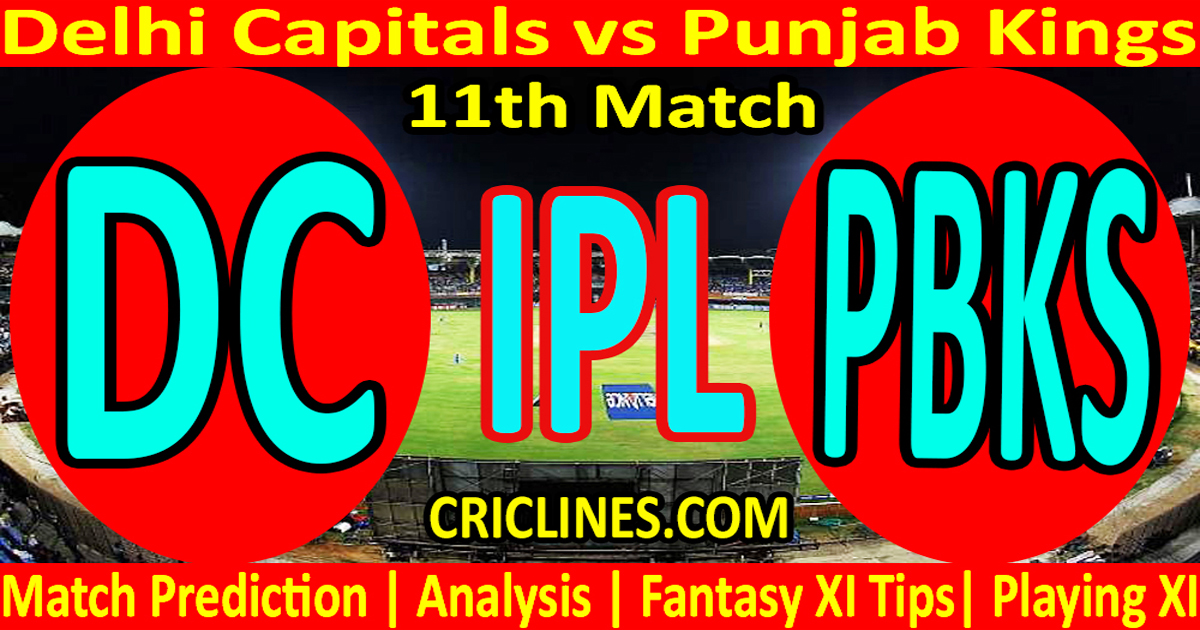 The cricket fans are ready to witness yet another big battle of the IPL T20. The 11th Match of the Indian Premier League is scheduled to play between Delhi Capitals and Punjab Kings on Sunday, 18th April 2021 at Wankhede Stadium, Mumbai. We are posting safe, accurate, and 100% secure today match prediction for all matches of IPL T20 free.

Delhi Capitals won their first match against Chennai Super Kings but were beaten by Rajasthan Royals on their second match by the margin of three wickets. We had seen some interesting matches which were decided on the last ball and this match was one of them. At one stage, Delhi Capitals had a grip on the match even after having a low total on the board. The top batting order of the Delhi Capitals almost collapsed in that match. They lost their key four wickets on a total of just 37 runs in seven overs. The skipper, Rishabh Pant stayed on the pitch but he failed to find any companion. He was the highest run-scorer with 51 runs to his name on 32 deliveries with the help of nine boundaries. Lalit Yadav scored 20 runs while Tom Curran scored 21 runs. Prithvi Shaw, Dhawan, and Rahane failed to put some runs on the board after performing well in the first match.

The bowling department of Delhi Capitals gives some hopes after picking early wickets. They picked key five wickets on the Rajasthan Royals on a total of 42 runs but failed to stop David Miller and Chris Morris from scoring the runs. Avesh Khan proved the most successful bowler who picked three wickets against 32 runs in four overs. Chris Woakes and Kagiso Rabada picked two wickets each while Ravichandran Ashwin, Tom Curran, and Marcus Stoinis were the bowlers who failed to pick any wicket. Marcus Stoinis leaked 15 runs in one over while Ravichandran Ashwin was the most economical bowler who leaked just 14 runs in three overs bowled out. Tom Curran was charged for 35 runs in 3.4 overs bowled out and we don’t think that he was the best option to bowl the last over when they have 11 runs to defend.

Punjab Kings won the first match of this season of IPL against Rajasthan Royals but were beaten easily by Chennai Super Kings in their most recent match. Punjab Kings is a team that had strong batting order in the side like KL Rahul, Mayank Agarwal, Chris Gayle, Deepak Hooda, and eve Shahrukh Khan but their batting order almost collapsed in the most recent match and could manage to score just 106 runs in their inning of 20 overs. Shahrukh Khan was the highest run-scorer from their side with 47 runs to his name at the strike rate of 130. Jhye Richardson scored 15 runs while Deepak Hooda and Chris Gayle scored 10 runs each. Punjab Kings performed well in the previous season of IPL as they were getting a good start by their opening pair but we had not seen this in the matches so far. We think that Chris Gayle will swap his place with Mayank Agarwal. Nicholas Pooran is not in good form and Moises Henriques may replace him in this match.

We also had seen the bowling unit of Punjab Kings struggling in both previously played matches. They leaked 217 runs in their first match and 107 runs in 15.4 overs in the most recent match against Chennai Super Kings in the previous match. Riley Meredith and Jhye Richardson are available in the team but they are still not adjusted to the conditions of India and had been much expensive in the previous matches. We think that keeping five bowlers in the final paying eleven will not the best choice for Kings. They have to add an extra bowler to help five regular bowlers. Mohammed Shami, Arshdeep Singh, and Murugan Ashwin had been good so far but overseas players are still in search of good form and to adjust to the conditions.

Delhi Capitals is overall a strong team than Punjab Kings. They have the best players in the t20 format. The batting order of this team is also strong and some well-known hitter of t20 format is part of the squad of this team, so the winning chances of today match for Delhi Capitals have been increased. The equation of who will win today cricket match prediction and who will win the cricket match today is mentioned as under.

The 11th Match of IPL T20, 2021 is going to be held at the Wankhede Stadium, Mumbai. We had observed in the previous matches played here that the pitch here at this venue is good for batting in early overs. The track is slower than the others we have seen and helps the spinners quite a bit. We are hoping that the surface is bound to get slower and be a bit more difficult for batting in the last overs this match. A score of 185 seems to be a par score.

Dream11 fantasy team lineup prediction for Delhi Capitals vs Punjab Kings 11th Match IPL 2021. After checking the latest players’ availability, which players will be part of both teams, the possible tactics that the two teams might use as we had learned from previous seasons of the Indian Premier League to make the best possible Dream11 team.