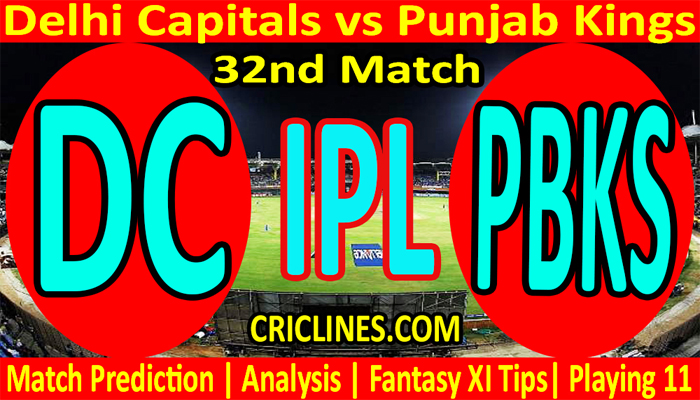 The cricket fans are ready to witness yet another big battle of the IPL 2022. The 32nd match of the Indian Premier League 2022 is scheduled to play between Delhi Capitals and Punjab Kings on Wednesday, 20th April 2022 at Maharashtra Cricket Association Stadium, Pune. We are posting safe, accurate, and 100% secure today match prediction of IPL T20 2022.

DC had not been impressive as many of us were expecting. They made key changes in the squad and picked some best players in IPL 2022 auctions but we are not seeing the results. They had played five matches with two wins to their name. They had lost three matches and are situated at the eighth position on the table. They were beaten by Royal Challengers Bangalore in their most recent match. On the other hand, the performance of Punjab had been average in IPL 2022. They had won three out of six matches played till now. They had lost three matches and are laying at the seventh spot on the table. They were beaten by SRH in the previous match even though they were the favorite to win this match as per IPL prediction of the major predictors.

Delhi had played five matches and they had still many matches left. They should remove the players who are not doing well in IPL 2022. They need to test the bench strength before it’s too late. They could win their previous match against RCB easily but they lost due to the worst batting performance. The bowling department of DC had been good but they failed to do their best in the previous match where they leaked 189 runs in 20 overs. Mustafizur Rahman, Thakur, Axar Patel, Kuldeep Yadav, and Khaleel Ahmed are the leading bowlers of this team. Lungi Ngidi, Anrich Nortje, and Chetan Sakariya are also available for the selection in this match. We think that Lungi Ngidi or Anrich Nortje will get a chance to play this match. Shardul Thakur was the most successful bowler in the previous match he picked one wicket in four overs against 27 runs. Axar Patel also picked one wicket while he was charged for 29 runs in four overs.

Khaleel Ahmed and Kuldeep Yadav also picked one wicket each. Remember that Kuldeep Yadav leaked a lot of runs. He was charged for 46 runs in four overs. Mustafizur Rahman was the only bowler who failed to pick any wicket. The batting order of DC performed well but could not chase the target of 190 runs and scored 173 runs in 20 overs. We have no doubt that the batting order of Delhi is strong and experienced. David Warner, Prithvi Shaw, Mitchell Marsh, Rovman Powell, Lalit Yadav, and Rishabh Pant are leading the batting order. David Warner was the most successful batter in the previous match scoring 66 runs on 38 balls with the help of four boundaries and five huge sixes. Rishabh Pant also performed well and scored 38 runs while Shardul Thakur scored 17 runs and Prithvi Shaw could manage to score 16 runs. David Warner and Prithvi Shaw are opening the batting inning and we are sure that they will provide a good opening start in this match.

The key strength of PBKS is the batting. They had won three matches in IPL 2022 due to the best batting performance and whenever their batting order failed, they lost the match. The most recent match against SRH is a key witness of it where they could manage to score just 151 runs in 20 overs. We are not saying that the batting order of Punjab is weak. They have the batters like Dhawan, Bairstow, Prabhsimran, Liam Livingstone, Shahrukh Khan, Jitesh Sharma, and Odean Smith on the side. Shikhar Dhawan had been through out in IPL 2022 but he could not score runs as per the expectations of the fans of PBKS. Liam Livingstone was the only successful batter from their side with 60 runs to his name. He faced just 33 balls and smashed five boundaries and four huge sixes during his inning. Shahrukh Khan also performed well with the bat and scored 26 runs. Prabhsimran Singh scored 14 runs while Odean Smith had 13 runs to his name. We are sure that the management of Punjab will make some key changes in the final playing eleven for this match and will test their bench strength.

The bowling department of Punjab is strong but we can’t compare it with the other teams of IPL 2022. Odean Smith, Rahul Chahar, Arshdeep Singh, Kagiso Rabada, and Vaibhav Arora are the leading bowlers while they are also using Liam Livingstone as the sixth bowling option. They have some best bowlers in the bench strength like Bhanuka Rajapaksa, Nathan Ellis, and Sandeep Sharma and they should test these bowlers as they are still in the early matches of IPL 2022. Rahul Chahar was the only successful batter in the previous match who picked two wickets in four overs against just 28 runs. Kagiso Rabada also had a wicket to his name. He picked one wicket in four overs while he was charged for 29 runs. No other bowlers from the side of PBKS could manage to pick any wicket. Vaibhav Arora, Arshdeep Singh, Odean Smith, and Liam Livingstone were the bowlers who remained wicketless. Punjab should make some major changes in the final playing eleven to win this and the next matches otherwise, they are going to face a lot of problems in IPL 2022. The positions of almost all teams are very close and the net run rate will be a big factor in IPL 2022.

Delhi had played 28 matches against Punjab where they had won 13 matches while Punjab had won 15 matches.

Delhi Capitals had won two out of the most recent five matches they had played while Punjab Kings had won three out of five recently played matches.

Delhi Capitals is overall a strong team when we compare with Punjab Kings. They have the best players in the t20 format of cricket. The batting order of this team is also strong and some well-known hitters of the t20 format are part of the squad of this team, so the winning chances of today’s match for the Delhi Capitals have been increased. The equation of who will win today’s cricket match prediction and who will win the cricket match today is mentioned as under.

The 32nd match of IPL T20, 2022 is going to be held at the Maharashtra Cricket Association Stadium, Pune. We had observed in the previous matches played here that the pitch here at this venue is good for batting in early overs. The track has a good amount of pace and bounce which allows the batsmen to the good cricketing shorts but this ground also have big boundaries which can be a plus point for the bowlers. A score of 190 plus seems to be a par score.

David Warner, Rahul Chahar, and Liam Livingstone are the key players to watch in this match.

Dream11 fantasy team lineup prediction for Delhi Capitals vs Punjab Kings 32nd Match IPL 2022. After checking the latest player’s availability, which players will be part of both teams, the possible tactics that the two teams might use as we had learned from previous seasons of Indian Premier League to make the best possible Dream11 team.

We had provided you with the above-mentioned today’s prediction on the basis of our research, understanding, and analysis. These prediction tips have also been based on the reports we have from our different sources. You can consider the point we had provided you and the final decision will be yours that you have to make at your own risk.