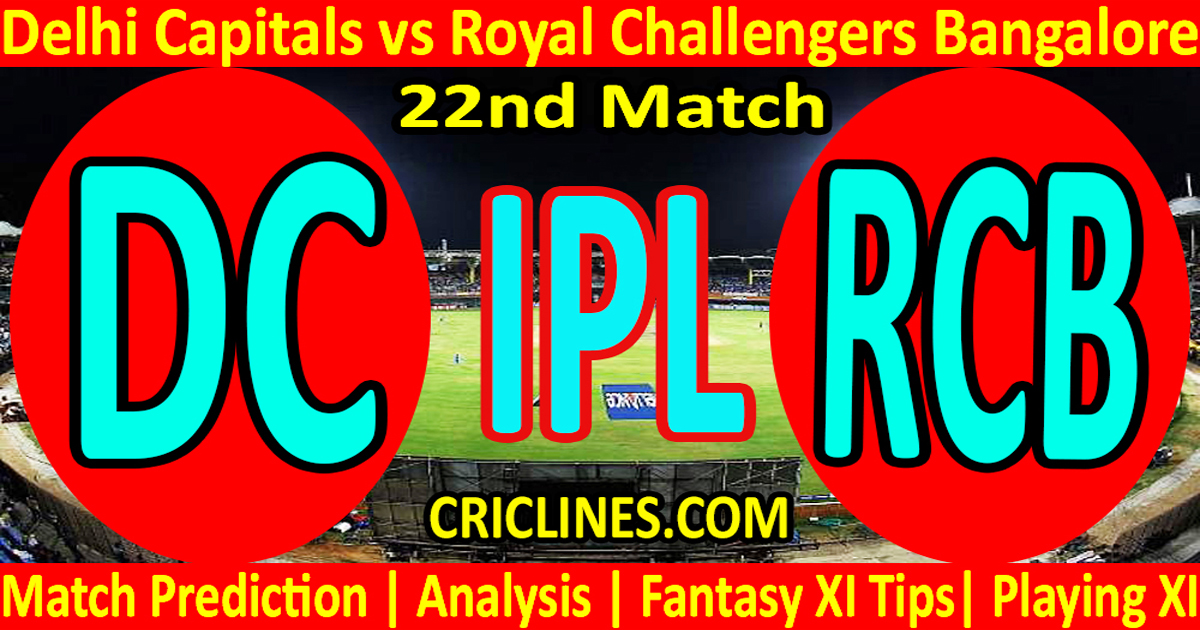 The world is ready to witness yet another big battle of the IPL T20. The 22nd Match of the Indian Premier League is scheduled to play between Delhi Capitals and Royal Challengers Bangalore on Tuesday, 27th April 2021 at Narendra Modi Stadium, Ahmedabad. We are posting safe, accurate, and 100% secure today match prediction for all matches of IPL T20 free.

Delhi Capitals had been good in this season of the Indian Premier League. They had won four out of five matches played so far and are holding the 2nd position on the points table right now. Rishabh Pant is leading this team in a good way. They had beaten Sunrisers Hyderabad in their previous match in the super over. This was the first super over of this tournament. The batting order of Delhi is scoring runs consistently. Shikhar Dhawan had been outstanding in this season of the IPL T20 and had scored runs in almost all matches that he had played. Prithvi Shaw was also outstanding with the bat in the previous match where he scored fifty. Steven Smith is also in some kind of form and had started run-scoring. Rishabh Pant is also scoring runs continuously. Shimron Hetmyer is a hard hitter but he had failed to score runs. We think he needs some rest to get his form back.

The bowling department of Delhi Capitals also had performed well in almost all previously played matches. Avesh Khan is the bowler who had picked wickets in almost all matches and also had been the most economical bowler from this side. Axar Patel is the other bowler who had played a key role in almost each and every win for the Delhi Capitals. Ravichandran Ashwin had been the economical bowler but he had failed to pick wickets in the matches he had played so far. The form of Kagiso Rabada has a big question mark as he had failed to give the performance as many of us were hoping. Not only he had failed to pick early wickets, but he also had leaked plenty of runs. Marcus Stoinis and Amit Mishra also had been average. The batting order of the Delhi Capitals is strong and performing well but this is the bowling department that needs some upgrades.

Royal Challengers Bangalore lost the previous match after winning four matches in a row. This loss in the previous match had moved this team from first to the third position on the points table. We have no doubt that the batting order of this team is strong and experienced. Virat Kohli and Devdutt Padikkal had been outstanding with the bat in the previous matches. The pair of Glenn Maxwell and AB de Villiers is also dangerous as we had observed this in the previously played matches but these all batsmen failed to score runs in the most recent match against Chennai Super Kings but we don’t think that they need some kind of change in their batting order. This is not possible that a strong and experienced batting lineup should score runs in almost all matches. No team of this tournament can take the batting order of Royal Challengers Bangalore lightly as this is the batting order which the most dangerous among all teams of this tournament.

Royal Challengers Bangalore is also a strong team when it comes to the bowling department. Mohammad Siraj is a bowler who had played a key role in the win for the team. He had picked wickets and also had been the economical bowler. Harshal Patel is the other bowler who is like the backbone of the bowling department of Bangalore but he was unlucky in the most recent match against CSK where they leaked 51 runs in four overs and picked three wickets. He also leaked 37 runs in over which is the highest score ever leaked in the history of IPL in one over. Kayle Jamieson is the other bowler who had been good with the ball in the previously played matches. Dan Christian and Washington Sundar also had performed well with the ball so far. The form of Chahal and Navdeep Saini had not been good and we think that these bowlers should be given the rest in this match.

Royal Challengers Bangalore is overall a strong team than Delhi Capitals. They have the best players in the t20 format. The batting order of this team is also strong and some well-known hitter of t20 format is part of the squad of this team, so the winning chances of today match for Royal Challengers Bangalore have been increased. The equation of who will win today cricket match prediction and who will win the cricket match today is mentioned as under.

The 22nd Match of IPL T20, 2021 is going to be held at the Narendra Modi Stadium, Ahmedabad. We had observed in the previous matches played here that the pitch here at this venue is good for batting in early overs. The track has a good amount of pace and bounce which allows the batsmen for the good cricketing shorts but this ground also has big boundaries which can be a plus point for the bowlers. A score of 195 plus seems to be a par score.

Dream11 fantasy team lineup prediction for Delhi Capitals vs Royal Challengers Bangalore 22nd Match IPL 2021. After checking the latest player’s availability, which players will be part of both teams, the possible tactics that the two teams might use as we had learned from previous seasons of the Indian Premier League to make the best possible Dream11 team.