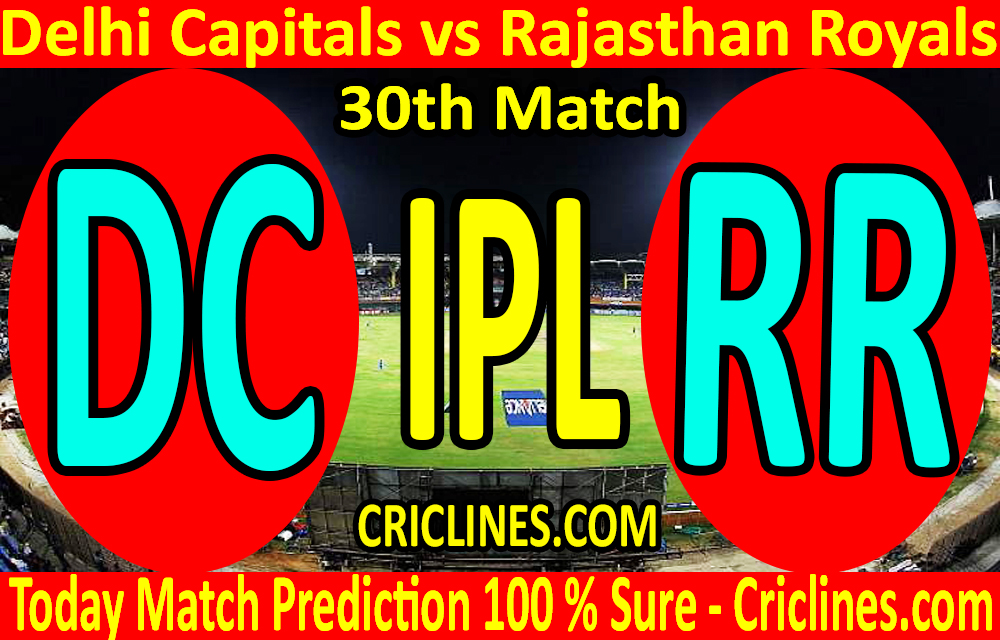 The world is ready to witness yet another big battle of the IPL T20. The 30th Match of Dream11 IPL T20 2020 is scheduled to play between Delhi Capitals and Rajasthan Royals on Wednesday, 14th October 2020 at Dubai International Cricket Stadium, Dubai. We are posting safe, accurate, and secure today match prediction for all matches of IPL T20 free.

Delhi Capitals had been outstanding in this Indian Premier League edition till now. Five wins from seven matches had put them at the second position on the points table where they are tied with the Mumbai Indians and RCB with the same points. DC had been rising in this tournament but now, they are going to face some issues are their key batsman, Rishabh Pant is injured and Alex Carey may be his replacement. Alex Carey is also a left-handed batsman and may face difficulties while facing the overseas bowlers. Ajinkya Rahane is another batsman who is waiting for a chance. Stoinis had to continue his good form as DC need his to fire in the middle overs otherwise, they have to face problem while competing against the strong teams of this tournament. In the bowling department, Kagiso Rabada is shining with full light in this season of IPL T20. He is the most wicket-taker of this tournament and had picked 21 wickets already. After missing some early matches, Ravi Ashwin is back to the playing eleven and had proved his ability in the last couple of matches. Anrich Nortje and Axar Patel are also doing well. DC has the option of Harshal Patel as the sixth bowler and can use him when needed.

Delhi Capitals lost the most recent match against Mumbai Indians by the handsome margin of five wickets. That was a match they could easily win but a couple of drop catches to become the reason for their loss. They won the toss and decided to bat first. The performance of their batting order was good in that match. They scored a total of 162 runs in their inning of 20 overs. Shikhar Dhawan was the highest run-scorer from their side who scored 69(52) runs with the help of six boundaries and one huge six. He remained not out till the end of the inning. The skipper, Shreyas Iyer also had a good performance with the bat and scored 42(33) runs and smashed five boundaries. Alex Carey remained not out after scoring 14 runs. The bowling unit of DC performed well in the previous match but failed to defend the target of 163 runs on the board. They were charged for the target in 19.4 overs. Kagiso Rabada was the highest wicket-taker from their side who picked two wickets in his four overs bowled out against 28 runs. Axar Patel, Ravichandran Ashwin, and Marcus Stoinis picked one wicket each while Anrich Nortje and Harshal Patel remained wicketless.

The halfway of this season of IPL T20 had been completed and Rajasthan Royals are still searching for a perfect combination. They had played a total of seven matches with three wins to their name. They had lost four matches and are holding the 6th position on the points table. They are coming to this match on the back of a massive win over Sunrisers Hyderabad in their previous match with the margin of five wickets. They lost the toss and were asked to field first. The performance of their bowling unit was good in that match. They restricted the strong batting order of Sunrisers Hyderabad on a total of 158 runs. Jofra Archer was the most economical bowler from their side who picked one wicket in his four overs bowled out against 25 runs. Kartik Tyagi picked one wicket in his three overs while he was charged for 29 runs. Jaydev Unadkat was the other bowler from their side who picked one wicket in four overs while he leaked 35 runs. Shreyas Gopal, Rahul Tewatia, and Ben Stokes were the bowlers who failed to pick any wicket.

The batting order of Rajasthan Royals performed well in the previous match and chased the target of 159 runs in 19.5 overs. The top order of RR almost failed to give the best performance in that match. They lost their key three batsmen on a total of 26 runs but Riyan Parag and Rahul Tewatia performed well and scored 64 runs in the last four overs of their inning. Rahul Tewatia was the highest run-scorer from their side who remained not out after scoring 45(28) runs with the help of four boundaries and two sixes. Riyan Parag also had a superb performance with the bat. He scored 42(26) runs and smashed two boundaries and the same huge sixes. He also remained not out till the chase of the target. Robin Uthappa had 18 runs to his name while Hose Buttler, who was playing his very first match of this season of Indian Premier League, could manage to score 16 runs. Sanju Samson scored 26 runs while Ben Stokes and the skipper, Steven Smith scored five runs each.

The 30th Match match of the Indian Premier League is going to be held at the Dubai International Cricket Stadium, Dubai. We had observed in the previous matches played here that the pitch here at this venue is good for batting. The track is slower than the others we have seen and helps the spinners quite a bit. We are hoping that the surface is bound to get slower and be a bit more difficult for batting in this match. A score of 175 is going to be tough to chase.

Dream11 fantasy team lineup prediction for Delhi Capitals vs Rajasthan Royals 30th Match IPL 2020. After checking the latest players’ availability, which players will be part of both teams, he possible tactics that the two teams might use as we had leaned from previous seasons of Indian Premier League to make the best possible Dream11 team.