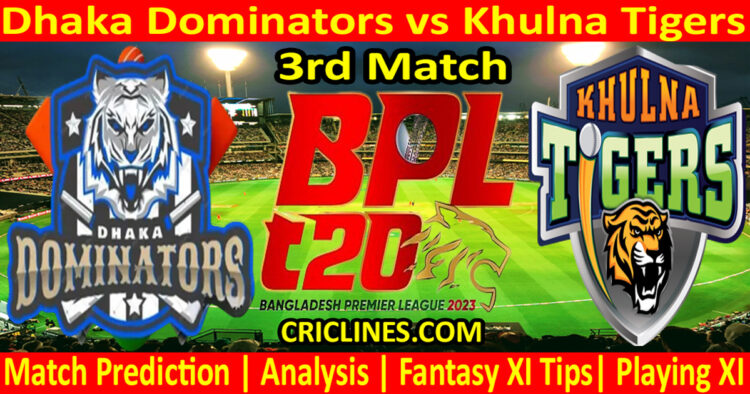 The cricket fans are ready to witness yet another big battle of T20 cricket. The 3rd match of Bangladesh Premier League 2023 is scheduled to play between Dhaka Dominators and Khulna Tigers on Saturday, 7th January 2023 at Shere Bangla National Stadium, Dhaka. We are posting safe, accurate, and secure today match prediction of BPL T20 free.

The franchise from Dhaka city of Bangladesh will be playing in this tournament with the new name, Dhaka Dominators, and also the new owner. Dhaka had won the title of Bangladesh Premier League three times and now had upgraded their squad so we can hope that they can win another title. They will be playing their very first match of this tournament against Khulna Tigers. The Tigers had not won any title of BPL.

Dhaka Dominators had been renamed from Minister Dhaka and they were not good in the previous season of the Bangladesh Premier League. They were the second worst performing team after the competition of the league matches. They had changed their total squad for this tournament as the new owner of this team has a lot of interest in cricket. Taskin Ahmed had been appointed as the new captain of this team.

The batting order of Dominators is very strong for this tournament which will be led by Taskin Ahmed. Al-Amin Hossain and Shoriful Islam are two other players who can play a main role in the batting order of this team. Arafat Sunny is another experienced player that can prove a main role in each and every match of this tournament. The Dominators had added Chamika Karunaratne to their squad. He is an experienced all-rounder from Sri Lanka and we are sure that he will play a main role in this team. He will not be part of the final playing eleven for this match as he is with his national team in India. Dilshan Munaweera, Soumya Sarkar, Shan Masood, and Ahmed Shehzad are also part of the squad of the Dominators.

Khulna Tigers are the part of BPL since some previous season but had not won any title. They reach the final of this tournament back in 219 but failed to win the title. They were holding the four position on the points table in the most recent edition of Bangladesh Premier League but were beaten by Chattogram Challengers in the eliminator match. The Tigers had lost some key players who performed well in the previous edition. Mushfiqur Rahim, Andre Fletcher, Sikandar Raza, and Thisara Perera are not part of the Tigers for this tournament.

Tamim Iqbal had been appointed as the new captain of the Khulna Tigers for this season of BPL. He was part of Dhaka in the previous season and we are sure that he will play a main role for his new team. Mahmudul Hasan Joy is another main player of this team who was part of the squad of Comilla Victorians in the previous season. Sabbir Rahman and Yasir Ali are the best all-rounders in the squad of the Tigers. Avishka Fernando and Dasun Shanaka are known as hard hitters of T20 cricket and are part of the squad of this team but both players will not the part of the final playing eleven as both players are on international duty. The bowling unit of the Khulna Tigers is very strong and is led by Naseem Shah, Wahab Riaz, Nasum Ahmed, and Paul van Meekeren.

The 3rd match of BPL season 2023 is going to be held at Shere Bangla National Stadium, Dhaka. The pitch at the stadium is considered to be decent for batting but it will offer some help to the spinners like every other surface in the country. A score of around 190 should be considered par at the venue. The average first-inning score at this venue is 152 runs and the average second-inning score is 130 runs. This venue has the highest total recorded of 211 runs in 20 overs.

Dream11 prediction for Dhaka Dominators vs Khulna Tigers-BPL T20-3rd Match. After checking the latest player’s availability, which players will be part of both teams, and the possible tactics that the two teams might use as we had learned from previous seasons of BPL to make the best possible Dream11 team.

We had provided you with the above-mentioned BPL Prediction on the basis of our research, understanding, and analysis. These prediction tips have also based on the reports that we have from our different sources. You can consider the point we had provided you and in the end, the 3rd decision will be yours that you have to make at your own risk.