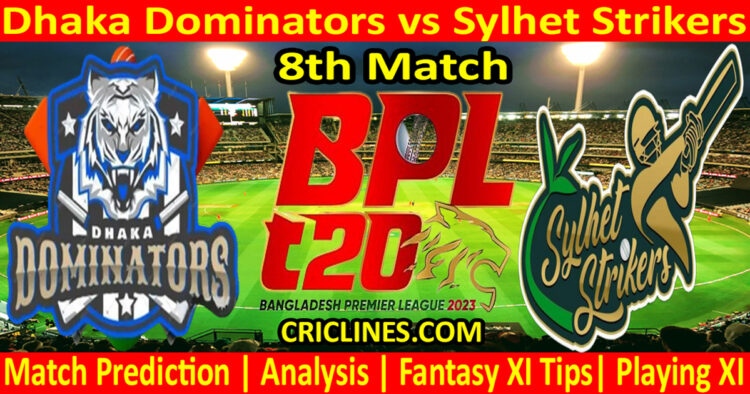 The world is ready to witness yet another big battle of T20 cricket. The 8th match of Bangladesh Premier League 2023 is scheduled to play between Dhaka Dominators and Sylhet Strikers on Tuesday, 10th January 2023 at Shere Bangla National Stadium, Dhaka. We are posting safe, accurate, and secure today match prediction of BPL T20.

Dhaka Dominators had a kick start to this tournament and won their very first match of this edition of BPL against Khulna Tigers with a handsome margin. The way how Sylhet Strikers had performed in this tournament is just outstanding. They won all three matches played and are currently leading the points table.

Dhaka Dominators had a winning start to this season of the Bangladesh Premier League and we are sure that they are going to give a tough time to other teams in this tournament. They had beaten Khulna Tigers in their first match with a handsome margin of six wickets where they won the toss and decided to field first. The way how their bowling unit performed in that match was just outstanding. They leaked 113 runs in 20 overs. Al-Amin was the most successful and highest wicket-taker from their side with four wickets to his name in four overs against 28 runs.

Arafat Sunny also had an outstanding performance in the previous match and picked two wickets in four overs while he was charged for 24 runs. The skipper, Nasir Hossain also performed well and picked two wickets. Taskin Ahmed and Muktar Ali were the bowlers who failed to pick any wicket. The batting order of Dhaka Dominators was not good in the previous match but they chased the target of 114 runs in 19.1 overs. Nasir Hossain was the most successful and highest run-scorer from their side with 36 runs to his name on the same balls with the help of four boundaries. Dilshan Munaweera scored 22 runs while Soumya Sarkar had 16 runs to his name.

Sylhet Strikers had won three matches in a row and their most recent win came against Comilla Victorians with a handsome margin of five wickets. They decided to field first after losing the toss. The performance of their bowling unit was good and they leaked 149 runs in 20 overs. Mohammad Amir was the most successful bowler with two wickets to his name in four overs against 22 runs. Thisara Perera also picked two wickets while he was charged for 26 runs in four overs. Imad Wasim and Mortaza picked one wicket each in the previous match.

Rejaur Rahman Raja was the only bowler in the previous match who failed to pick any wicket in the most recent match. The batting order of Sylhet Strikers is strong and they performed well in the previous match. They chased the target of 150 runs in 17.4 overs. Towhid Hridoy was the most successful and highest run-scorer from their side scoring a half-century. He scored a total of 56 runs on 37 balls with the help of three boundaries and four huge sixes. Mushfiqur Rahim also performed well and scored 28 runs. He remained not out till the chase of the target. He faced 25 balls and smashed two boundaries. Zakir Hasan scored 20 runs.

The 8th match of BPL season 2023 is going to be held at Shere Bangla National Stadium, Dhaka. The pitch at the stadium is considered to be decent for batting but it will offer some help to the spinners like every other surface in the country. A score of around 190 should be considered par at the venue. The average first-inning score at this venue is 152 runs and the average second-inning score is 130 runs. This venue has the highest total recorded of 211 runs in 20 overs.

Dream11 prediction for Dhaka Dominators vs Sylhet Strikers-BPL T20-8th Match. After checking the latest player’s availability, which players will be part of both teams, the possible tactics that the two teams might use as we had learned from previous seasons of BPL to make the best possible Dream11 team.