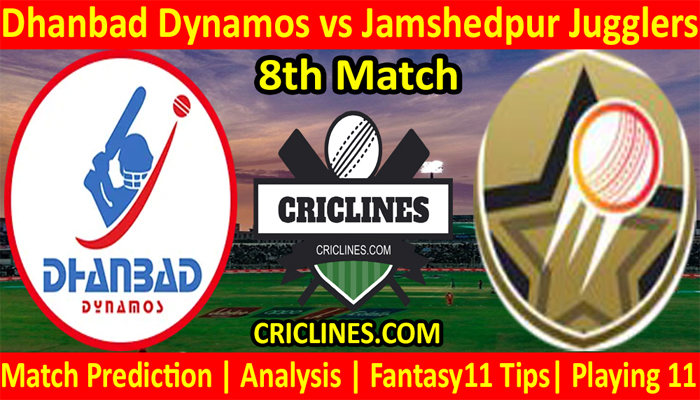 Dhanbad Dynamos failed to have a kick start to this edition of the Jharkhand T20 League and lost their opening match of this tournament against Bokaro Blasters by a big margin of six wickets. They lost the toss and were asked to bat first. Their batting order totally collapsed in that match. They could manage to score 109 runs in their inning of 20 overs. The captain, Vikash Vishal was the most successful batter from their side with 27 runs to his name. Prakash Munda scored 23 runs while Prem Kumar had 20 runs to his name.

The bowling department of Dhanbad Dynamos failed to defend a low target on the board and leaked the target of 110 runs in 17.2 overs. Pratik Ranjan was the only successful bowler from their side who picked two wickets in his four overs against just 20 runs. Yuvraj Kumar and Raunak Kumar picked one wicket each while Vivekanand Tiwari and Amit Kumar-II were the bowlers who could not manage to pick any wicket. The bowling department of Dhanbad Dynamos is doing its job very well and now it’s the time for the batting order to play a main role for the team.

Like Dhanbad Dynamos, Jamshedpur Jugglers also failed to have a good start to Jharkhand T20 League, 2022, and lost the first match of this tournament against Singhbhum Strickers by a big margin of seven wickets. The way how their batting order performed in that match was just outstanding. They scored a total of 183 runs in their inning of 20 overs. Almost all batters from their side put some runs on the board. Kumar Suraj was the highest run-scorer from their side with 58 runs to his name on 39 balls with the help of five boundaries and two huge sixes.

Supriyo Chakraborty scored 40 runs while Vivek Kumar had 32 runs to his name. Harshit Namdev was the other batter who put some runs on the board. Jamshedpur Jugglers lost the previous match due to the worst performance by their bowling department. They failed to defend the target of 184 runs and leaked this target in 19.4 overs. Rajandeep Singh was the only bowler from the side of Jamshedpur Jugglers who picked three wickets in four overs and bowled out while he was charged for just 19 runs. Vikas Kumar, Nishikant Kumar, Supriyo Chakraborty, Rahul Prasad, and Kamal Kumar were the bowlers who could not manage to pick any wicket.

The toss will play a key role in the decision of all matches of the Jharkhand T20 League. Defending is much easier in the conditions in England than chasing so according to toss prediction, the team who will win the toss will elect to bat first.

The 8th Match of the Jharkhand T20 League is going to be played at JSCA International Stadium Complex, Ranchi. The pitch here at this stadium is expected to be flat and much favored for batting. It has a decent amount of pace and bounces in it. We may have some high scoring matches here. The pitch may also have some help in it for the seamers.

Check out the Dream11 fantasy prediction for the 8th Match of Jharkhand T20 League, between Dhanbad Dynamos and Jamshedpur Jugglers.