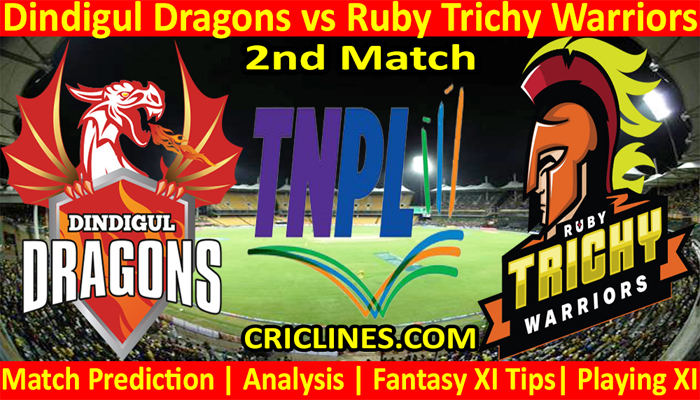 The world is ready to witness yet another big battle of the TNPL T20 League. The 2nd match of Tamil Nadu Premier League 2022 is scheduled to play between Dindigul Dragons and Ruby Trichy Warriors on Friday 24th June 2022 at Indian Cement Company Ground, Tirunelveli. We are posting safe, accurate, and secure today match prediction of TNPL free.

The seventh season of TNPL had started and this is good news for cricket fans in India and around the world. Tamil Nadu Premier League is a basic platform for the domestic players and this league had produced some big names who had also played in IPL and also had been a part of the Indian national cricket team. This is the reason why TNPL is closely observed by the management of BCCI. Both teams, Dindigul Dragons and Ruby Trichy Warriors are going to play this match with full strength.

Dindigul Dragons performed well in the previous edition of TNPL and were holding the third position on the points table after the completion of league stage matches. They beat Lyca Kovai Kings in the eliminator match but were beaten by Chepauk Super Gillies in the qualifier two matches. Hari Nishanth is going to lead DDS in this season of the Tamil Nadu Premier League. He is a good batsman and had decent records in domestic cricket tournaments. S Arun, Rajhamany Srinivasan, K Vishal Vaidhya, M Karthik Saran, and AG Pradeep are the leading batters with Hari Nishanth.

RS Mokit Hariharan and R Vivek are batting all-rounders in the squad of DDS while Mani Bharathi is the wicket-keeper batsman of this side. The bowling department of Dindigul Dragons is also very strong and experienced. M Silambarasan, S Swaminathan, Lakshminarayanan Vignesh, and K Mukunth are the leading bowlers of DDS while S Kishan Kumar, Rangaraj Suthesh, and Karaparambil Monish are the bowling all-rounders. Advaith Sharma, Gurjapneet Singh, S Lokeshwar, and Vimal Khumar are also part of the squad of DDS.

Ruby Trichy Warriors was the best performing team in the most recent edition of TNPL. They won five out of seven matches played in the league round. They lost just two matches and were leading the points table of TNPL season six when the league round was completed. They were the runner-up team as they lost the final of the previous season of TNPL against Chepauk Super Gillies by the margin of just eight runs. Rahil Shah had been appointed as a captain of RTW. They had not made many changes in the squad for this tournament. The batting order of Ruby Trichy Warriors is very strong. Adithya Ganesh, Hemanth Kumar, Muhammed Adnan Khan,
Nidhish Rajagopal, P Sugendhiran, and Murali Vijay are the leading batters of this team. Murali Vijay is an experienced batter of RTW as he had played nine T20 matches for India and 106 matches in IPL.

The 2nd Match match of Tamil Nadu Premier League season 2022 is scheduled to be held at Indian Cement Company Ground, Tirunelveli. The pitch here at this venue is flat and good for batting as there is no bounce and pace. Out-field at this venue is very fast and the ball will travel to the boundary very quickly. It also has a lot of help for the spin bowlers but almost all teams in this tournament have a strong batting order so this does not matter. According to the live cricket score, a total of 180 runs should be a par score.

While we had a deep look at the squad, we think that Ruby Trichy Warriors is going to perform well in this match the TNPL T20 season 7 as they have a couple of players who can change the game. In this match, the batting department of the Ruby Trichy Warriors is much stronger as compared to the Dindigul Dragons. We also have reports from different sources for the win of the DDS.

We had provided you with the above-mentioned today prediction on the basis of our research, understanding, and analysis. You can consider the point we had provided you and in the end, the 2nd Match decision will be yours that you have to make.