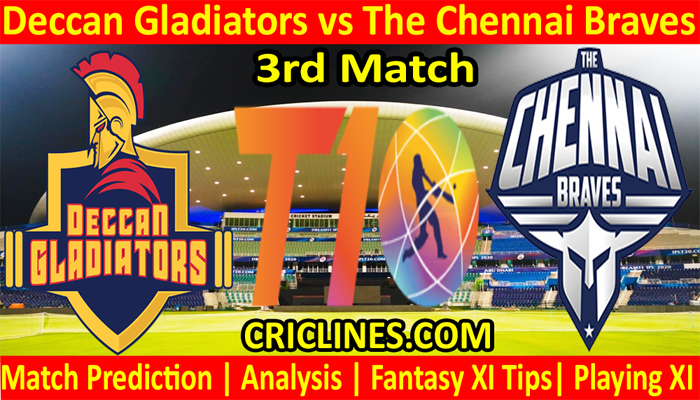 The cricket fans are ready to witness yet another big battle of the Abu Dhabi T10 League. The 3rd match of the T10 League is scheduled to play between Deccan Gladiators and The Chennai Braves on Saturday, 20th November 2021 at Sheikh Zayed Stadium, Abu Dhabi. We are posting a safe, accurate, and secure today match prediction of Abu Dhabi T10 League free.

Deccan Gladiators failed to execute their plans in the previous season of the Abu Dhabi T10 League. They could manage to win just two out of six matches played at the league stage. They lost four matches and were laying at the 6th position on the points table after the end of league stage matches. On the other hand, The Chennai Braves is the latest addition to the family of the Abu Dhabi T10 League.

Tom Banton and Tom Moores are the wicket-keeper batsmen in the squad of Deccan Gladiators. The bowling unit of this team is also strong and experienced at least on papers. Tymal Mills. Odean Smith, Rumman Raees, Izharulhaq Naveed, Anwar Ali, Nav Pabreja, Hamid Hasan, and the skipper, Wahab Riaz will be handling the bowling unit of the Gladiators.

The Chennai Braves are going to play their first match ever in Abu Dhabi T10 League and they had picked the best and well-known players of the shorter format of cricket. The batting order of this team of strong at least on papers. Darren Bravo, Waseem Muhammad, Bhanuka Rajapaksa, Khalid Shah, Nicholas Pooran, and Mohammad Shahzad are the leading batters of this team.

Some best all-rounders of the shorter format of cricket are also part of the squad of Chennai Braves. Yusuf Pathan, Dhananjaya Lakshan, Tion Webster, Ravi Bopara, Samiullah Shinwari, Angelo Perera, Dasun Shanaka, Mark Deyal, and Curtis Campher are the all-rounders in this team while Junaid Siddique, Roman Walker, Munaf Patel, and Fareed Ahmad Malik are the key bowlers of The Chennai Braves.

The 3rd match of the T10 League is going to be played at Sheikh Zayed Stadium, Abu Dhabi. This venue has one of the flattest and completely dead tracks we have seen in the past. We are expecting a slow, flat, and good batting surface for this match. A score of more than 120 runs should be a par score.

Wahab Riaz, Andree Russell, and Nicholas Pooran are key players to watch in this match.

The dream11 team prediction for Deccan Gladiators vs The Chennai Braves 3rd match T10 League. After checking the latest player’s availability, which players will be part of both teams, he possible tactics that the two teams might use as we had learned from previous seasons of T10 League to make the best possible Dream11 team.