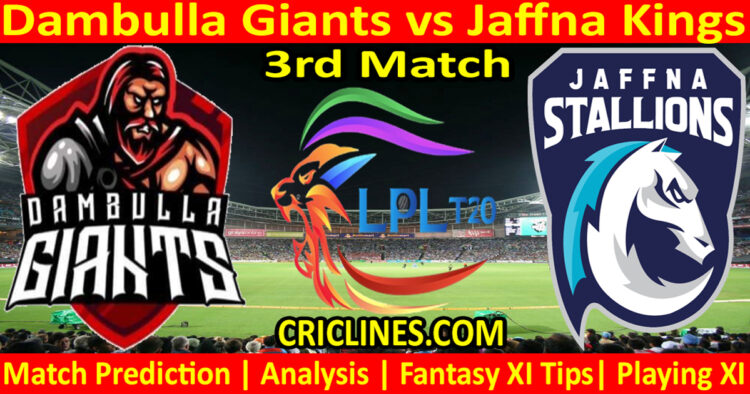 The world is ready to witness yet another big battle of the Lanka Premier League. The 3rd match of LPL T20 is scheduled to play between Dambulla Giants and Jaffna Kings on Wednesday, 7th December 2022 at Mahinda Rajapaksa International Stadium, Hambantota. We are posting safe, accurate, and 100% secure today match prediction of LPL T20.

Dambulla Giants were not much impressive in the previous edition of the Lanka Premier League. They played eight league matches with just three wins to their name. They lost four matches while their one match came with no result. They were holding the fourth position on the ladder. They won the eliminator match against Colombo Stars but were beaten by the same team, Jaffna Kings in the qualifier 2 match.

The defending champions, Jaffna Kings had a winning start to this tournament and had beaten Galle Gladiators in their opening match with a handsome margin of 24 runs. The batting order of this team was not impressive but their bowling unit played the main role to open the account on the points table.

Dambulla Giants had updated its squad for this season of the LPL T20. Dasun Shanaka was leading the Kings in the previous edition of this tournament and he will also be leading in this tournament. The batting order of this team is strong at least on paper. Haidar Ali will be leading the batting order with Lasith Croospulle, Kalana Perera, Shevon Daniel, and Chamindu Wickramasinghe. This team also has some best batting all-rounders in their squad. Chaturanga de Silva, Dilum Sudeera, Ravindu Fernando, Sikandar Raza, Tom Abell, and Lahiru Madushanka are key batting all-rounders in the squad of the Dambulla Giants.

Bhanuka Rajapaksa and Jordan Cox are wicket-keeper batters of Dambulla Giants. This side is also strong in the bowling department. Noor Ahmad had played a lot of cricket in a different league of the world for different franchises and he will be leading the bowling unit of the Giants. Some other best bowlers of the T20 format of cricket like Lahiru Kumara, Paul van Meekeren, Dushan Hemantha, Sachitha Jayathilake, and Pramod Madushan are available in the squad of the Giants. Dambulla Giants are not a weak side and we are sure that they will play good cricket in this season of the Lanka Premier League. We think that they could struggle with the bowling unit against the strong batting orders of this tournament.

Jaffna Kings won their first match against Galle Gladiators and will be confident about this match. The bowlers of the Kings played a main role in the team. They lost the toss and were asked to bat first. The performance of their batting order was not much impressive. They could manage to put in just 137 runs and their full team came back to the pavilion in 19.5 overs. D Wellalage was the most successful and highest run-scorer with 30 runs to his name on 20 balls with the help of four boundaries. Shoaib Malik also scored 30 runs while he faced 27 balls and smashed just two boundaries. Dhananjaya de Silva could manage to score 29 runs on 19 balls with the help of three boundaries and two huge sixes.

The skipper, Thisara Perera could manage to score just 16 runs in the previous match while no other batsmen from their side could manage to enter into the double figure. Jaffna Kings won the first match due to an outstanding performance by their bowling unit. They defended the target of 138 runs and leaked just 113 runs in 20 overs. They used seven bowlers in the previous match and almost all bowlers from their side performed well. Binura Fernando was the most successful and highest wicket-taker from their side with three wickets to his name in three overs against just 22 runs. Vijayakanth Viyaskanth was the other bowler who performed well with the ball and picked wickets. He picked up two wickets while he was charged for 20 runs in four overs. Maheesh Theekshana, James Fuller, and Dunith Wellalage picked one wicket each while Dhananjaya de Silva and the skipper, Thisara Perera were the bowlers who failed to pick any wicket.

The 3rd Match of the Lanka Premier League is going to be held at the Mahinda Rajapaksa International Stadium, Hambantota. We had observed in the previous matches played here that the pitch here at this venue is good for batting. The track is slower than the others we have seen and helps the spinners quite a bit. We are hoping that the surface is bound to get slower and be a bit more difficult for batting in this match. A score of 185 is going to be tough to chase.

The weather forecast for Hambantota is good this cricket match. There are almost no chances of rain in the region and we are hopeful that we will have a full match to enjoy.

Dream11 fantasy team lineup prediction for Dambulla Giants vs Jaffna Kings 3rd Match LPL 2022. After checking the latest player’s availability, which players will be part of both teams, and the possible tactics that the two teams might use as we had learned from previous seasons of Lanka Premier League to make the best possible Dream11 team.