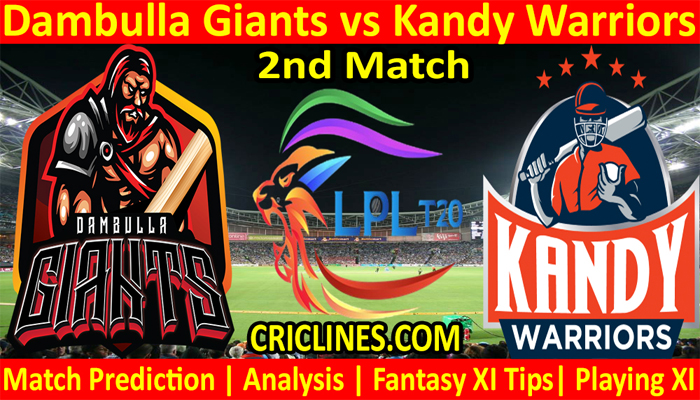 The cricket fans are ready to witness yet another big battle of the Lanka Premier League. The 2nd match of LPL T20 is scheduled to play between Dambulla Giants and Kandy Warriors on Monday, 6th December 2021 at R.Premadasa Stadium, Colombo. We are posting safe, accurate, and 100% secure today match prediction of LPL T20 free.

Dambulla Viiking had changed their name to Dambulla Giants. This team was the second-best performing team of the previous edition of Lanka Premier League at the league stage. They won five out of eight matches played at the league stage. They lost two matches while their one match was ended with no result. They were holding the 2nd position on the points table after the end of league stage matches. They were beaten by Jaffna Stallions in the semi-final 2 match.

Kandy Warriors also had changed their name from Kandy Tuskers. They were the worst performing team of the previous season of the Lanka Premier League. They could manage to win just two out of eight matches played. They lost six matches and were laying at the bottom of the points table.

Dambulla Giants had made some key changes in their squad along with the name change. Dasun Shanaka had been given the responsibility to lead this team in this tournament. The batting order of this team is strong and they have the services of the best players of the T20 format of cricket. Rameshi Mendis, Sohaib Maqsood, Najibullah Zadran, Lahiru Udara, Kalana Perera, and Dilshan Munaweera are the key batters of this team.

Janith Liyanage and Madushan Ravichandrakumar are batting all-rounders in the squad of this team while Niroshan Dickwella is the wicket-keeper batsman of the Dambulla Giants. The bowling unit of this team is also strong and experienced at least on paper. Imran Tahir, Chamika Karunaratne, Joshua Little, Nuwan Pradeep, Muditha Lakshan, Chamikara Edirisinghe, Sacha De Alwis, Sachitha Jayathilake, and Marchant de Lange will be handling the bowling unit of Dambulla Giants. Marchant de Lange had been outstanding in the recent edition of the Abu Dhabi T10 League and we are sure the conditions in Sri Lanka will help him to pick early wickets.

With the name change, Kandy Warriors also had changed their captain and they had appointed Asela Gunaratne as their new skipper. They also had made some key changes in their squad. The batting order of the Warriors is good but not very strong. Rovman Powell, Ahmed Shahzad, Cameron Delport, Angelo Perera, Milinda Siriwardana, Ishan Jayaratne, and Kamindu Mendis are the leading batters of the Kandy Warriors.

Kandy Warriors is full of experienced and young players of the t20 format. The batting order of this team is also strong and some well-known hitters of the t20 format are part of the squad of this team, so the winning chances of today’s match for Kandy Warriors have been increased. The equation of who will win today’s cricket match prediction and who will win the cricket match today is mentioned as under.

The 2nd match of Lanka Premier League is going to be held at the R.Premadasa Stadium, Colombo. We had observed in the previous matches played here that the pitch here at this venue is good for batting. The track is slower than the others we have seen and helps the spinners quite a bit. We are hoping that the surface is bound to get slower and be a bit more difficult for batting in this match. A score of 185 is going to be tough to chase.

Dream11 fantasy team lineup prediction for Dambulla Giants vs Kandy Warriors 2nd Match LPL 2021. After checking the latest player’s availability, which players will be part of both teams, he possible tactics that the two teams might use as we had learned from previous seasons of Lanka Premier League to make the best possible Dream11 team.