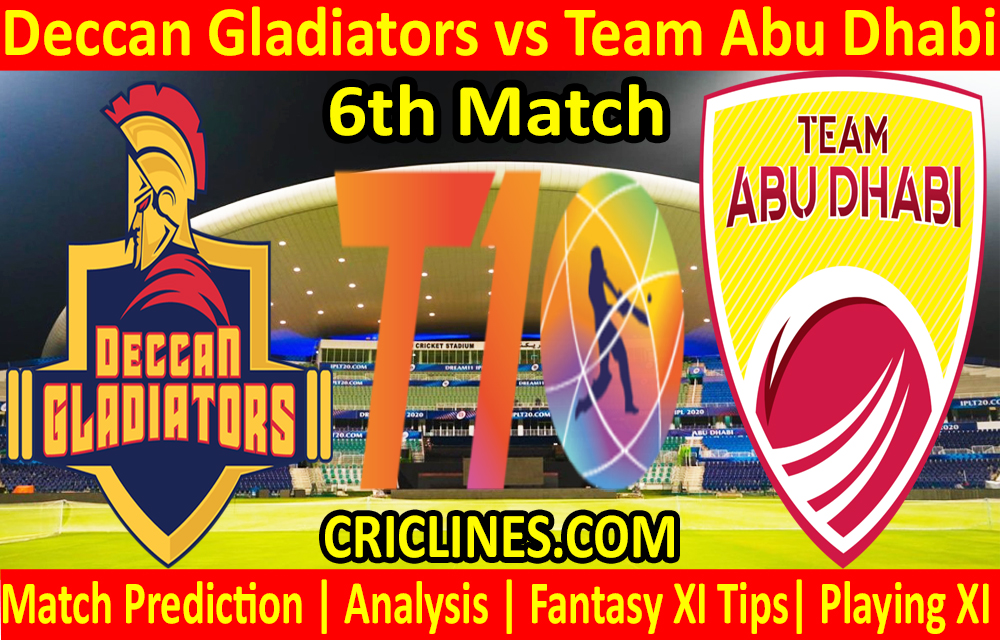 The world is ready to witness yet another big battle of the T10 League. The 6th Match match of the T10 League is scheduled to play between Deccan Gladiators and Team Abu Dhabi on Friday, 29th January 2021 at Sheikh Zayed Stadium, Abu Dhabi. We are posting safe, accurate, and secure today match prediction for all matches of Abu Dhabi T10 League free.

Deccan Gladiators failed to have a kick start to this season of the Abu Dhabi T10 League. They had lost their opening match of this tournament against Pune Devils by the margin of seven wickets. They lost the toss and were asked to bat first. The performance of their batting order was average in that match. They scored 104 runs in their inning of 10 overs. Azam Khan was the highest run-scorer from their side who remained not after scoring 37 runs. He faced just 13 deliveries and smashed one boundary and four sixes.

The performance of Team Abu Dhabi was not impressive in the previous edition of the Abu Dhabi T10 League and the squad of this team is strong for this season. The players like Avishka Fernando, Chris Gayle, Alex Hales, Leonardo Julien, Kushal Malla, Chris Morris, Usman Shinwari, and Najibullah Zadran are part of the squad of this side.

The 6th Match match of the T10 League is going to be played at Sheikh Zayed Stadium, Abu Dhabi. This venue has one of the flattest and completely dead tracks we have seen in the past. We are expecting a slow, flat, and good batting surface for this match. As per the live cricket score, the target of more than 120 runs should be a par score.

The dream11 team prediction for Deccan Gladiators vs Team Abu Dhabi 6th Match match T10 League. After checking the latest players’ availability, which players will be part of both teams, the possible tactics that the two teams might use as we had learned from previous seasons of T10 League to make the best possible Dream11 team.