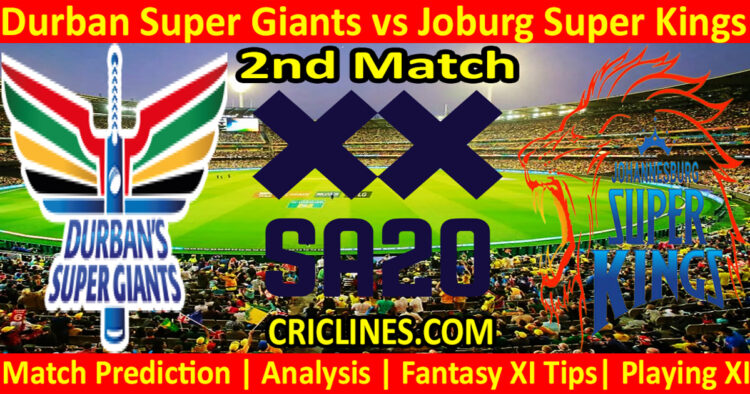 The cricket fans are ready to witness yet another big battle of the SA20 2023. The 2nd match of the SA20 T20 League 2023 is scheduled to play between Durban Super Giants and Joburg Super Kings on Wednesday, 11th January 2023 at Kingsmead, Durban. We are posting safe, accurate, and 100% secure today match prediction of SA20 T20 2023 with live SA20 scores and ball-by-ball updates with prediction.

SA20 T20 League had been started and a total of six teams are participating in this tournament. Almost all teams in this season of SA20 League are owned by different IPL franchises. This is an effort from IPL to help South African cricket on a financial basis. We think that this league will help cricket South Africa to get some young players for the national team. All matches in this tournament are going to be very interesting as all teams are very strong.

Durban Super Giants are owned by Lucknow Super Giants and RPSG Group. Lance Klusener is the coach of this team while Quinton De Kock had been appointed as the captain of this team. They had been allocated Kingsmead Cricket Ground and it means that they are going to play their first match on their home ground. Joburg Super Kings is a sub-team of Chennai Super Kings and India Cements. Stephen Fleming is the head coach of this team while Faf du Plessis will be leading this side. Wanderers Stadium is the home ground of this team.

The management of Durban Super Giants had appointed Quinton De Kock as their captain. We know that he is a wicketkeeper-batsman and it is an interesting point that Durban Super Giants have four wicketkeeper batsmen in their squad. Heinrich Klaasen, Johnson Charles, and Matthew Breetzke are other wicketkeepers in the squad of this team. We are hoping that they will play with Heinrich Klaasen and Johnson Charles while Matthew Breetzke has less chance to feature in this tournament. Christiaan Jonker is the only regular batsman on this team.

Kyle Mayers and Jason Holder are batting all-rounders in the squad of the Durban Super Giants. Durban Super Giants had picked more bowlers than batsmen. They have seven regular bowlers and four bowling all-rounders. It will be difficult for the management of this team to pick the five best bowlers for this match. Keshav Maharaj will be leading the bowling unit of this team with Prenelan Subrayen, Dwaine Pretorius, Keemo Paul, Wiaan Mulder, Reece Topley, Junior Dala, Dilshan Madushanka, Simon Harmer, Hardus Viljoen, and Akila Dananjaya. We think that Akila Dananjaya, Dwaine Pretorius, Keemo Paul, Wiaan Mulder, Reece Topley, and Junior Dala will part of the playing eleven of this match.

Joburg Super Kings are a well-balanced team than Super Giants. Faf du Plessis will be leading this side. He had played in Big Bash League recently and performed well for his team. He is in good form and we are sure that he will continue his good form in this tournament. He will be taking care of the batting order of Joburg Super Kings with Janneman Malan, Reeza Hendricks, and Leus du Plooy. Kyle Verreynne and Donavon Ferreira are wicketkeepers in the squad of the Kings.

Joburg Super Kings are also rich in the bowling department. Lewis Gregory is the leading bowler of this team. He will also have the support of the best bowlers of T20 cricket like Maheesh Theekshana, Romario Shepherd, Gerald Coetzee, George Garton, Alzarri Joseph, Lizaad Williams, Nandre Burger, Caleb Seleka, Aaron Phangiso, Malusi Siboto. We are sure that Maheesh Theekshana, Romario Shepherd, Alzarri Joseph, and Aaron Phangiso will play in this match. Joburg Super Kings are a combination of good batters and bowlers and we are sure that they will give a tough time to other strong teams in this tournament.

Joburg Super Kings is overall a strong team when we compare it with Durban Super Giants. They have the best players in the t20 format of cricket. The batting order of this team is also strong and some well-known hitters of the t20 format are part of the squad of this team, so the winning chances of today’s match for Joburg Super Kings have been increased. The equation of who will win today’s cricket match prediction and who will win the cricket match today is mentioned as under.

The 2nd match of SA20 T20, 2023 is going to be held at Kingsmead, Durban. We had observed in the previous matches played here that the pitch here at this venue is good for batting in early overs. The track has a good amount of pace and bounce which allows the batsmen to the good cricketing shorts but this ground also has big boundaries which can be a plus point for the bowlers. A score of 190 plus seems to be a par score.

The weather forecast for Durban is good for this cricket match. There are almost no chances of rain in the region and we are hopeful that we will have a full match to enjoy.

Dream11 fantasy team lineup prediction for Durban Super Giants vs Joburg Super Kings 2nd Match SA20 2023. After checking the latest player’s availability, which players will be part of both teams and the possible tactics that the two teams might use as we had learned from previous seasons of SA20 T20 League to make the best possible Dream11 team.