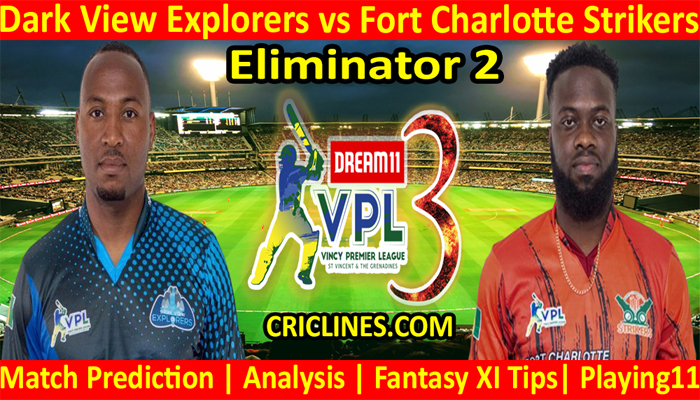 The cricket fans are ready to witness yet another big battle of T10 cricket. The Eliminator 2 of Vincy T10 Premier League 2021 is scheduled to play between Fort Charlotte Strikers and Dark View Explorers on Saturday, 29th May 2021 at Arnos Vale Ground, Kingstown, St Vincent. We are posting safe, accurate, and secure today match prediction for all matches of VPL T10 League free.

Dark View Explorers was the best performing team of this season of the VPL T10 League and were leading the points table after the end of the league stage matches. But, they were beaten by La Soufriere Hikers in the qualifier one match by the margin of seven wickets. The batting order of this team was not impressive in that match. They could manage to score just 77 runs in their inning of 10 overs. Sealron Williams was the most successful and highest run-scorer from their side who remained not out after scoring 25 runs. He faced just seven deliveries and smashed four huge sixes during his inning.

Romano Pierre scored 16 runs while Alex Samuel had 10 runs to his name. The bowling department of Dark View Explorers was also not impressive in that match. They failed to defend a low target on the board and leaked the target of 78 runs in 7.3 overs. Rayan Williams was the only successful bowler from their side who picked two wickets in his two overs bowled out against just 15 runs. Shammon Hooper picked one wicket while Deron Greaves and Jade Matthews were the bowlers who failed to pick any wicket in the most important match.

The performance of Fort Charlotte Strikers had been good in this tournament. They also won six out of eight matches played at the league stage. They lost two matches and were holding the 3rd position on the points table after the end of the league stage matches. They had won the eliminator 1 match against Salt Pond Breakers with a margin of four runs. The performance of their batting order was average in the previous match. They scored 88 runs in their inning of 10 overs. Miles Bascombe was the highest run-scorer from their side who scored 36 runs. He faced 28 deliveries and smashed three boundaries and two sixes.

Sealroy Williams scored 18 runs and Casmus Hackshaw could manage to score 14 runs. Fort Charlotte Strikers won the previous match due to the best performance by their bowling unit. They defended the target of 89 runs and leaked 84 runs in their inning of 10 overs. They used seven bowlers in the previous match and Ray Jordan was the highest wicket-taker from their side who picked three wickets in his two overs bowled out against just five runs. Nigel Small picked two wickets while Geron Wyllie and Shaquille Browne picked one wicket each. Rasheed Frederick, Gidron Pope, and Kirton Lavia were the bowlers who failed to pick any wicket.

The Eliminator 2 of Vincy Premier League season 2021 is scheduled to be held at Arnos Vale Ground, Kingstown, St Vincent. Fewer matches had been played here. A score near about 110 can be difficult for the chasing team.